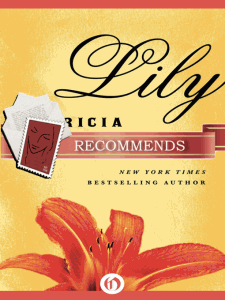 When I heard the news that many of your romance titles were being released as ebooks by Open Road Integrated Media, I felt a pang of jealousy for those newer romance readers who would have the opportunity to discover your work for the first time. When the opportunity came to interview you, Jane suggested that perhaps some reviews of these older books wouldn’t be amiss. It was natural for me to review Lily, since once upon a time it was among my top five favorite romances.

Now, I don’t mean to suggest that Lily fell out of favor with me at some point; that’s not the case. Unlike most romance readers (at least so it seems), I don’t reread. Not even favorite books. I’m not sure why not – for the first five or so years that I read romances, I reread regularly. I guess at some point I just decided that there were enough good new books out there for me to read; I didn’t have time to keep rereading things I’d already read. I keep my favorite books, to be sure, and wouldn’t be parted with them. I just don’t read them. (I’m sure the fact that they are in boxes in a closet with stuff on top of them contributes to this – if I had them on shelves and easily accessible, my habits might be different.)

My point, and I do have one, is that I haven’t read Lily in part or in whole, for a long, long time. Inevitably, over the years, my tastes have changed. So I approached the book with a measure of trepidation – what if it didn’t live up to my remembrance? Not only would I be personally disappointed, would I then have to (gasp!) give Lily a bad review?!

I needn’t have worried – while I found some flaws in the story (flaws I very well may have noticed the first time and forgotten), I still found reading the book, over all, a magical experience.

The book opens with Lily Trehearne dealing with the recent death of her father and the trying attention of her guardian, the Reverend Roger Soames, who insists that Lily must marry his son Lewis. Lily has no intention of or desire to marry Lewis; she only needs Soames to put up with her for a short while until she reaches her majority and gains a small inheritance. But Soames won’t take no for an answer, and threatens to have Lily taken up as a thief (he burns several pounds in the fireplace and then calls to his son to fetch the constable) if she doesn’t comply. Lily and Soames tussle, and in an attempt to get away Lily pushes Soames, who in true melodrama fashion falls and hits his head, and lies apparently dead on the hearth as the law pounds on the door. Lily flees in terror, grabbing the first coach out of town.

A chance encounter with a housekeeper traveling back to her employer lands Lily a job as a maid in Cornwall, which she figures is remote enough to hide in for the time being. So she comes to Darkstone Manor (!!), home of Devon Darkwell (!!!!), whom she first encounters drunkenly waving a pistol in the hall. It turns out that Devon is not normally given to such Elvis-like behavior; he’s especially distraught on the anniversary of the death of his child. Devon is normally rather buttoned-up and repressed.

Lily is going under the Dickensian alias of Lily Troublefield, and (at first at least) sporting a ridiculous Irish accent as further disguise. She is quite unsuited to the position of housemaid, having been raised as a gentlewoman, albeit an impoverished one. Her beauty and her innate nobility attract Devon’s attention, though it’s hardly love at first sight. Devon is definitely a product of his time; he just doesn’t understand why a housemaid won’t spread her legs for him. It’s only when he is injured (reluctantly participating in his brother Clay’s smuggling activities, Devon is wounded by the King’s men) and Lily must nurse him that a deeper relationship develops.

Devon and Lily’s romance is deliciously old-school in all the best ways; above all it’s a roller-coaster. He pursues, she retreats; she relents, he treats her like shit (afraid to love done wrong by a woman once blah blah blah). Lily is badly injured, and it’s partly Devon’s fault. So he’s nice for a while (well, kind of), and then there’s a big mis and he’s really, really not nice. She goes away and he pursues her and is not nice some more and then she goes away again and this time he pursues her because he’s realized he was wrong. And then a bunch of other stuff happens. Lily doesn’t lack for action.

One thing that struck me about the book is that it has an unusual number of villains (I guess if your characters are going to suffer that much, you need lots of villains to facilitate). There’s the Reverend Soames, whose fervent religiosity is revealed to be less than genuine; there’s the housekeeper, Mrs. Howe, whose religiosity is more sincere but also kind of violent and loony; Mrs. Howe’s son, the dastardly valet Trayer, and finally one whose identity I won’t reveal, since it’s kind of a spoiler to events in the second half of the book. The last villain, actually, is a bit of a pitiable figure, though his actions are such that I wouldn’t call him sympathetic.

Besides the (honestly kind of delicious) over-the-topness of Lily, there were a few things I noticed that mark it as an earlier, less sophisticated effort. I mentioned Lily’s silly Irish accent; in general her early behavior has some TSTL markers that really aren’t indicative of her personality as a whole. Even the fleeing after Reverend Soames is injured struck me as kind of hasty, though I took into account the fact that he was, as a man and a minister, much more powerful than she, and that 19th century English justice may have left something to be desired when it came to the fates of poor orphan girls.

Other than that, there were quite a few abrupt POV switches that forced me to reread paragraphs to figure out whose perspective was being relayed. Generally, though, the seeds of the author’s fine prose style are strongly in evidence here.

The characterization of secondary characters is very good. There’s Clay, Devon’s happy-go-lucky younger brother – he’s a bit of a rogue (I would’ve mourned him not getting his own book, but he has a fiancee by the end of Lily anyway). There’s Lowdy, another housemaid who befriends Lily and speaks in an almost incomprehensible Cornish accent (normally I would recoil at dialogue rendered in dialect, but it’s kind of fun to try to figure out what exactly Lowdy is saying). Most of all, there is Meraud, the mysterious moor-hermit who takes Lily in after she flees Devon. Meraud is thought by locals to be a witch, but mostly she just seems no-nonsense and a little strange; her avocation is the creation of giant sculptures of mud and straw, which, given that she creates these out on the moor where absolutely no one sees them definitely qualifies them as art for art’s sake. Meraud is a vibrant, unique character, and her relationship with Lily is almost as important as Devon’s.

Cornwall itself, with its unique and specific qualities, almost qualifies as a character itself. It’s full of rocky outcroppings and smugglers and treacherous tides and pilchards; I’m reminded of another of my favorite romances, and the first book I reviewed for DA – Penelope Williamson’s Once in a Blue Moon.

I write this review aware that some readers may read the book and just not be able to handle its old-fashioned style: either the relentless sturm und drang or the dickishness of the hero will put them off (possibly both). But I know that there are readers out there who haven’t read Lily who will love it as I do. My grade: straight A.