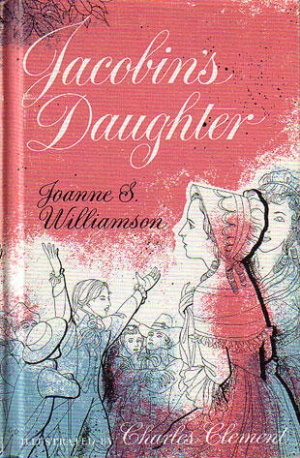 I found your book at a used bookstore somewhere in southern California, and I had forgotten I had even had it, until I unpacked my books from storage after my move a few months ago. After the whole kerfuffle for For Such a Time went down, and once I had written my review, I felt the (very) strong urge to read smarter and more politically progressive historical romances, whether YA or adult. I remembered my copy of Jacobin’s Daughter, and I decided to give it a whirl. (The fact that it was beautifully illustrated by Charles Clement helped too.)

The good news is, that it’s a great book. It’s emotionally satisfying, AND it holds up to rereading. (I read it first on vacation; then I read it again to write this review.)  It’s the story of Babette Duplay, the youngest daughter of Maurice Duplay, a cabinet-maker in Revolutionary Paris who becomes the landlord of the young revolutionary Robespierre. She falls in love with Philippe Lebas, one of Robespierre’s friends from his hometown, and the whole book shows how she blossoms into adulthood in a time of political upheaval and revolution.

In some ways it reminded me of a softer, more romantic, YA-oriented version of Hilary Mantel’s Place of Greater Safety, as many of the characterizations (of the main revolutionaries, at least) are similar. Camille Desmoulins is a stammering, quick, attractive gadfly of a man, charming and endearing, and Georges Danton is very big, very loud, very charismatic, and somewhat corrupt. Most importantly, Maximilien Robespierre—whose romance with Babette’s sister Cornélie (aka Eléonore) is the B romance plot in this book—is a gentle, high-minded yet steely-eyed idealist who also provides the other strong character arc to the story. While Babette grows mature and more compassionate over the course of the story, Max actually falls apart, and his worst tendencies come out under the influence of heartless radicals like Saint-Just (Babette’s dislike of Saint-Just grows throughout the book until she tells her friend Henriette that she’d best break off her engagement with the guy). And finally, in the end, Max betrays all his beloved principles—including his best friend Camille.

The scene where Camille’s wife Lucille, Babette’s good friend, comes to Cornelie (now engaged to Robespierre) to beg for Camille’s life towards the end of the book is heartbreaking. Here’s an excerpt:

I was the first visitor to see Lucille standing in the doorway, and at the sight of her my heart turned over.

She was smartly, even gaily dressed. But I had never seen her so thin. She was very pale except for two spots of color on her cheeks, and her eyes were unnaturally bright.

She looked past me at Cornélie. “I must see Maximilien,” she said. “Where is he?”

Cornélie was trembling, but she controlled herself enough to offer Lucille a chair.

Lucille remained standing. “The soldiers said he was busy and was not seeing anyone. But I said I would wait, and while they were discussing what to do about me, I slipped through to the side entrance. I know this house so well, you see.”

But Lucille continued as though she had not heard. “You remember our anniversary party? And the night we brought little Horace here so we could show him off to everybody? And the night Maximilien and Camille had that argument over a passage in Racine, and how they both threatened to ask their old schoolmaster because they had forgotten the Revolution and that they had smuggled the old man out of the country to protect him from mobs during the September riots?” She clasped her hands together. “Where is he, Eléonore?”

Cornélie had summoned her strength this time and had resumed her sewing, though I don’t think she had any idea of what she was doing. “He is not well, Lucille. And it’s true he is not seeing anyone. Not even me.”

“He’ll see me if you ask him,” Lucille insisted. “I must talk to him, implore him—I wrote him a letter, but he didn’t answer.  Eléonore, Camille was his schoolmate, he is his oldest and dearest friend!”

“Lucille, listen to me,” cried Cornélie.

But Lucille didn’t hear. She sank to her knees beside Cornélie, catching hold of her wrists. “Maximilien can’t believe him guilty,” she cried. “I know he will never let Camille die. Make him see me before it’s too late.”

Victoire, who had not spoken since Lucille had appeared, now raised her head. “Lucille,” she said quietly, “it is too late.”

Lucille stared at her for a moment, then began to cry. I had never seen anyone cry like that—so silently and so helplessly.

“He is so frightened,” she sobbed. “These past few days since he was arrested I’ve stayed near the prison with Horace, and sometimes I’ve seen him—just a glimpse. He waves to me, and I can see that he tries to smile. But he’s so frightened. I can see how frightened he is.”

Lucille shook her head. “It can’t be true. We’re so happy—we love each other so—the baby is so beautiful—everybody is fond of us–”

Victoire rose and went to her. “Lucille, you must go,” she said, drawing her to her feet. “You must, because Camille Desmoulins and Georges Danton and Fabre d’Eglantine are to be guillotined—today. The tumbrils will be by very shortly. They may—they may stop them here.”

Lucille glanced with terror at the window, then at Victoire. After a moment she seemed to become calm.

In the doorway she stopped and looked at Cornélie. “What is that you are working on?” she asked.

“A rug,” replied Cornélie. She was unable to speak above a whisper. “For Max’s house in the country.”

Lucille smiled, and her smile made me shiver. “Do you really think that you and Max will one day be married and live in a house in the country? And if you do, do you think you will ever be happy in it?”

One thing that’s great about this story is how the dark scenes, and the encroaching violence of the Reign of Terror, is handled with a surprising amount of subtlety and nuance. Robespierre is never portrayed as a one-dimensional evil dictator or ghastly green-coated vampire stand-in. (Or, in Michelet’s immortal words, “His smile is painful. His passion, which has visibly drunk up his blood and dried out his bones, has left only his nervous system, like that of an erect reptile as it reaches up with an indescribable, frighteningly gracious look.”) As portrayed in Jacobin’s Daughter, Max is a genuinely gentle and good soul who loves oranges and pigeons and dogs, takes Babette’s questions seriously instead of brushing her off, and wants to genuinely do good for the working poor. (Check out Hilary Mantel’s wonderful essay about a different, more positive take on Robespierre.)

This makes Max’s arc, in contrast to Babette’s, so fascinating. He has a big influence on her, and her eyes are opened to the plight of the poor (there’s a great scene where she meets a poor peasant kid named Paul, who guilelessly discusses how his brother was hanged when the local seigneur accused him falsely of stealing bread) and she learns how to be not quite so apolitical and frivolous. However, while Babette learns to be more compassionate and tolerant, Max becomes the opposite: he grows bitter, colder and more unforgiving.  It’s a fascinating contrast.

Romance-wise, this is more of a coming-of-age story than a romance proper, but I think that’s suitable given this is basically a YA story written before the YA genre actually existed. (In terms of the tone, it reminds me a bit of Elizabeth Marie Pope’s The Sherwood Ring, in which a serious subject is treated with elegance and charm, but the romance is a bit more probable.) I really liked the romance aspect though. Philippe, though somber and intent, is also quite dashing– Babette’s teenage crush is understandable, and I liked the buildup from her first meeting with Philippe before the fall of the Bastille, to her hiding her secret crush from her family, to it becoming an actual romance complete with a swoon-worthy waltz in a private room at a fancy party.

It also ties in nicely with Babette’s maturity. She’s quite immature when the story starts out, but not insufferably so. I think the characters are handled with a nice amount of realism, and the clear, simple yet elegant prose helps. The characterizations of the women characters are especially well done: I really liked the portrayal of the other sisters, especially quiet, sensible Victoire and confident, bossy Cornélie (and the good-natured way she manages everyone fits in amazingly well with actual accounts of her from the period).

The French Revolution, in many ways, was the birth of the modern world, and Jacobin’s Daughter illustrates that in a way that’s very approachable and relatable. Most French Rev era stories are about the plight of the aristocracy, which is interesting enough, but surely there are other stories that can be told. I love how Babette is just this ordinary kid. She doesn’t have any superpowers and she can’t do magic. She’s not extraordinarily beautiful or talented and she’s not the secret daughter of some duke somewhere. She’s just this girl, and I think that—her ordinariness—is her power. She’s you and me, just this person who dares to dream of a better world.

Of course, actually creating a better world is quite difficult. Jacobin’s Daughter brings home the tragedy of how kind, thoughtful people, with a desire to better society, can make—under intense pressure from things like war and armed insurrection—really bad decisions. Social justice movements can easily devolve into chaos and anarchy: and revolutions are almost never simple. But it doesn’t mean we shouldn’t try, and we shouldn’t grow up and learn. Learning is only done by doing, and the great ideas that were floated during the French Revolution (that were considered crazy at the time), like votes for all, abolition of the death penalty, and universal education, have come true in many places. We are all the children of revolution, and we all benefit from the vision of brave men and women who have come before us.

Or in the ending words of Babette Duplay Lebas, in Jacobin’s Daughter:

Through the years I have learned a great truth: that what is good will live and grow and what is evil will sicken and die; and that, as my husband once wrote me, the most important thing in life is to accept what cannot be avoided, to hold fast to what one believes to be right, and never to despair.

Perhaps that is the great lesson of growing up—for men, for women, and for nations.

Jacobin’s Daughter is, alas, out of print, but is available at many used bookstores, including Amazon and Abebooks, and at many libraries as well.  Highly recommended—definitely an A!