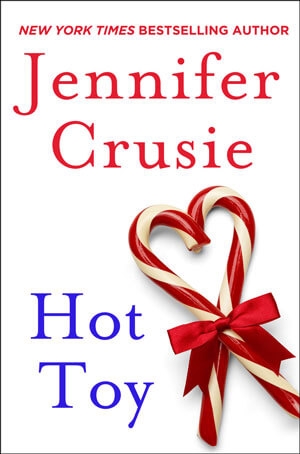 Mayhem ensues under the mistletoe in this story from New York Times and USA Today bestseller Jennifer Crusie, available as a standalone ebook for the first time.

When a determined shopper grabs the very last hot toy action figure off the shelf, she finds herself plunged into the middle of a real-life spy game and in the arms of a sexy secret agent in this novella previously published in the anthology Santa, Baby.

If this novella was this year’s hot toy, I’d be hunting it down in every store, ruthlessly using SING to bash other shoppers out of my way for the last copy and turning down all bidding offers from those poor, unfortunate souls who could only watch me complete my purchase while they wept. Fortunately, it’s an ebook and anyone can buy it from the comfort of their home while sitting in their jammies and downing coffee.

It’s Christmas eve so of course the world is out looking for the latest “gotta-have-it” toy including Trudy, even though she thinks it looks like an ugly Cabbage Patch doll in camo, when she runs into a man who was a “grave disappointment” after they went on 4 dates and then he didn’t call her! ((the rat bastard). Despite his entreaties, “grave disappointments” don’t get do-overs.

That’s before she scores (she scoooorrrres!!!) one of last year’s models (the one without the toxic waste spewing ability, her nephew will just have to deal) and suddenly she’s standing in line at the toy store knowing what a wounded gazelle on the veldt feels as the lions (aka other disappointed shoppers) eye it, licking their chops.

I was having trouble not LOL at the scene of Tru in line at the store, juggling toys, fending off bidders and trying to not lie to her 5 year old nephew on the phone about the existence of Santa while also talking her gin sozzled sister down off the ledge of mommy play group insanity and one upsmanship. But dear Lord, whose idea was it to nickname her nephew Leroy with the last name of Brown? I keep thinking there should be a girl sitting at the edge of the bar named Doris.

Believe it or not, things just get more surreal from there.

During the cab ride over to the large, abandoned warehouse, “grave disappointment” Nolan scores by being able to turn birthday wrapping paper into Christmas wrapping paper. I’d write that down for future use if I hadn’t switched to gift bags – reusable! Which is before things get even weirder. Still Nolan seems like a good guy, even if he also appears to be manically determined to go out with Trudy again. Serial killers probably aren’t that persistent. As the toy shit goes down though, he’s the man. Maybe. Trudy doesn’t know who to trust and neither do I at this point. I’m with her in thinking Reese and Nolan just make this stuff up as they go along.

Okay, I’ve given up trying to describe this one. It’s off the charts. The sisterhood biz between Trudy and Courtney is the bomb, though. With its ugly toy, hot spy, cute nephew (who remembers his “thank you’s”), ultimately caring sister and a hero who will keep his promises (after lying to her all night) to Trudy, I love this one. All of it in all its toxic waste spewing glory. A