REVIEW: His for the Holidays anthology from Carina Press

Carina is putting out three (invitation only) holiday anthologies, one contemporary, one paranormal, and one male/male. It is apparently possible to buy the stories grouped in the anthology, but also separately, individually, which I think is a fascinating choice. I was thrilled when I saw the m/m lineup: L.B. Gregg, Harper Fox, Josh Lanyon, and Z.A. Maxfield. And boy, this anthology is (mostly) brilliant. 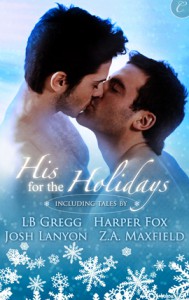 “Mistletoe at Midnight” is the first story in Carina’s m/m anthology. Owen McKenzie is a newly-transplanted vet. He’s moved from Boston to Vermont after a bad break-up, ready to embrace the small town life. He spends Christmas at an inn with his parents and brother…and, he soon discovers, his first love Caleb Black (which took me waaaay back to Elizabeth Lowell’s Only… series–one of the heroes has the same name), and his most recent ex-boyfriend Keith Turner (there at his mother’s four-month old invitation). Caleb and Owen were high school sweethearts — and you do a great job describing the utter misery of a high school crush:

Every afternoon, right after lunch, I passed him on my way to Mr. Clarke's Honors Calculus class. A single glance from Caleb Black was all it took to undo me. Head above the crowd, I'd move as unobtrusively as possible staring straight ahead and praying my dick wouldn't get any harder. I'd hike my backpack high and resolve to pass that slouching leaner unaffected before the fifth-period bell rang. Which was futile, of course, because as Caleb slouched indolently against the lockers with his left knee raised and his bootlace untied-‘those shining eyes watching me-‘my blood absolutely boiled. Sometimes he'd stare and bite the side of his thumb, his white teeth worrying the tough skin there, and I'd just die at the flash of his berry-red tongue.

He'd catch me looking, and from across that crowded hallway the entire world disappeared. The smell of warm sneakers and last night's disinfectant faded, and everything-‘the voices in the hallway, the metallic squeak of locker doors opening and closing, the cheesy posters and the endless chatter, the dazzling sunlight reflecting off waxed tile-‘everything on the planet paled in comparison to his green eyes. My stomach would flutter until it flipped to the floor because inside that prolonged second, I couldn't have felt more bumbling, or unsure, or tall-‘or turned on.

I enjoyed this story. A lot. I love Gregg’s voice. The story is more nuanced and layered than you’d expect for a short novella. Owen realizes how at fault he’s been in the breakup of his previous relationships, because of his history with Caleb and his family. The story is (obviously) told in first person from Owen’s perspective, which shuts us off a lot from Caleb’s feelings, but he manages to get his point across and everything comes together for a sexy happy ending.

Every now and then things felt a little…off, like the story shrugged a bit to get comfortable with itself, so it wasn’t all sparkles and happiness, but overall, I really liked it.

“Nine Lights Over Edinburgh” is one of those stories that’s going to stick with me for a long long time. At Dear Author, we’ve commented before about your incredible ability to evoke a landscape, a feeling of place, but I don’t think I’ve ever felt IN a place before the way I did with your descriptions of Edinburgh just before Christmas. Your ability to show the glittery tourist topside, the gritty dark underside, and the normal everyday people-live-here side of Edinburgh was amazing (not that I’ve ever been there, so I really can’t actually tell). And the characters were so much a part of that description, so much a part of the city, which was so much a part of them, that it was impossible to separate them.

James McBride is an undercover cop, working on bringing down a human trafficker. But he’s also dealing with the mostly congenial breakup of his marriage with attendant child custody issues and is struggling to find his way forward as someone who…is not straight (he refuses to label it at all). He’s also an UNrecovered alcoholic. The story is really almost entirely his, told in deep third person point of view. He’s pulled off his case by his supervisor because of the mistakes the drinking leads him to (he’s too trashed to recognize someone he’s arrested three times before and his cover’s blown). But he continues working on the case anyway.

He’s also working on a security detail with the Israeli embassy and eventually meets Toby Leitner, a Mossad agent. I say eventually, because it takes a while into the story before the heroes meet. It’s love at first sight, although McBride doesn’t recognize it:

McBride stopped listening. The Mossad agent-‘Leitner, McBride said to himself, his mind trying out the delicate, exotic name-‘had begun to smile. It was very faint, but undeniable. McBride's pulse geared up another notch. A strange heat sprang up in him, beginning in his gut, an inch or so under his navel, spreading to his solar plexus and a point behind his breastbone. His throat. Oh God, a sweet spot just up and back from his balls, halfway to his-

The security detail goes to shit, however, and then the trafficking case does too, because the suspect kidnaps McBride’s daughter. Toby and James work together to get her back. The story takes place in the space of a few days and so much happens in that time. James has to come to terms with himself, his past, his sexuality, his family, his job, his colleagues, his love for Toby, his alcoholism. Toby has to come to terms with coming back to life after the death of his longterm partner. And it all happens during a double suspense plot, which is slightly more realistic than your previous plots (although your characters still seem to have superhuman abilities after being sick or shot).

I adored this story. Nothing is superfluous. All the characters — and there are a lot of them for a short-ish story — are well-drawn and believable. And the city…the city just shines. Brilliant, transcendent, skillful writing, and a great love story. Thank you.

I really really loved your ePistols at Dawn last year. “I Heard Him Exclaim,” however…just never really worked for me. I don’t know if that’s because I couldn’t just read it in one shot because I was too busy, but I had to force myself to finish it.

Chandler has just inherited his niece after a car accident that killed his brother and sister-in-law. He’s taking her to his parents’ for Christmas and to leave her there. His car breaks down and he’s rescued by Steve, who is going to Las Vegas for Christmas because he doesn’t feel he can play Santa properly, like he does every year, because he’s lost so much weight after a heart attack scare the previous January. Steve eventually invites Chandler and Poppy (the niece) to Christmas with him and his family, abandoning the Vegas plan.

My problem with the story was its plotlessness. Or, maybe, its suspenselessness. Steve and Chandler meet, they have the hots for each other, they save each other (metaphorically), they have sex, they fall in love, they live happily ever after. Which is great, but there’s no tension for a good story. There’s an attempt at tension (will they or won’t they…have sex, recognize their feelings, admit their feelings, commit to each other) and an attempt at barriers (age, responsibilities, grief), but nothing really gels. The only true question is whether Chandler will give up the plot-moppet/Poppy, but his decision is dealt with in such an off-hand way when he finally makes it, it seems to confirm that it wasn’t the point.

Don’t get me wrong, I liked the characters and the sex was hot. But maybe in comparison with Fox’s story, I just didn’t CARE enough.

“Icecapades” suffered from I Wish It Were Longer-itis. I loved the characters and the set-up. I wanted just a touch more angst and more…well, just more. Noel Snow is an ex-jewel thief, living clean and legitimately on a 200 acre horse farm. He is also an author, with a series…about a jewel thief and his bumbling FBI nemesis. The original of the nemesis is Robert Cuffe (and can we be more obvious about the names? I mean, really?), his own nemesis, with whom he had sex with once on Y2K, just before he was forced to quit stealing. He never meant to make his fictional character quite so bumbling and regrets how this has hurt the real-life Robert. He has called and left messages for Robert on every New Years Eve night for ten years, voicing his regret and apologies. And suddenly Robert is on his doorstep, claiming he’s committing heists again.

Robert and Noel are visited…not by three ghosts, but by three people: a Christmas tree delivery man, a llama farmer, and a psychic whose greenhouse generator is down. (And yes, someone makes the Scrooge joke in the story.) And while helping Noel’s neighbors, they find their way back to each other. It’s a very cute story. As I said, I love the characters. And the set-up is wonderful. While Ms. Fox’s and Ms. Gregg’s story were about the right length, though, this one, as the shortest in the book, could have been way longer, especially since the characters were so appealing.

Overall, I really liked the anthology. I might even return to Ms. Maxfield’s story when I’m not so distracted. But “Nine Lights” made the whole anthology worth reading, and the other two are very enjoyable too. Carina has a hit here.

P.S. And for comparison, jmc’s review of the same anthology. I love how we have almost opposite reactions.

→ SarahF
Previous article: How to Add a Plugin to Calibre
Next Post: 2010 Winter ACE/ROC Giveaway