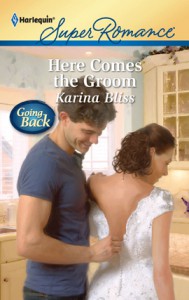 Here Comes the Groom is a best friends to lovers story. Jo and Dan have been BFF since childhood. They know each other and understand each others’ weaknesses and strengths like few other people do. And they’ve always had a platonic relationship. Or they did until that awkward night over a year ago when a very drunk Jo made a pass at Dan just before he was to be deployed to Afghanistan. Nothing came to pass from the pass, as Dan rejected Jo’s advances. But now Dan is back in their New Zealand town of Beacon Bay insisting on cashing in on their old marriage agreement-‘a promise scrawled on the back of a menu years ago due to heartbreak and booze. At first, Jo thinks he’s joking, but it quickly becomes clear that Dan is dead serious about wanting to marry her. To complicate matters, there’s Jo’s rapidly deteriorating grandmother, Dan’s feuding parents, and a lot of nosy townsfolk. In the summary version, this book sounds like every contemporary romance you’ve ever read.

Before I talk about what makes this book great, I want to talk about the pitfalls of contemporary romance because it is those very pitfalls that you so beautifully avoid while still using the conventions and tropes that we all like to see to energize the story-‘all of which, ultimately, make it a satisfying read.

The problem with contemporary romance is that it always feels like somebody’s mom wrote it in 1983. By which I mean, that even though the characters are supposed to be around my age (25-39ish), they all sound like were rounded up at a mid-1980’s romantic comedy anachronism convention with all the quasi-post-second-wave-feminism gender politics associated therewith and executed with the kind of heavy-handed myopia you usually attribute to aging relations political opinions. You know what I mean. It is the story in which the hard-headed business woman-‘who may or may not be wearing shoulder-pads despite it being 1998-‘has to be taught the value of family and American value systems via the sexy, sexy courtship of a small-town, blue collar mechanic who reads Dickens and possibly has either an orphaned child or an orphaned dog to raise. The hero, invariably, has to learn to love again after the death/abandonment of his wife/mother/flighty younger sister and is also, possibly, in the process of trying to save the dying family business. Together they save the economy of Treacle Town just in time for Christmas/The Big Festival of Celebratoriness/The appearance of badly dressed businessmen. If it is a 1980’s teen romantic comedy, there also may or may not be a downhill ski-race and/or boat race that will save Grandpa Nick’s estate/bed & breakfast. This is also the plot to every Hallmark Christmas movie, all of which have aired within the last 3 weeks and all of which I have seen. Along with this entree of romance, you can choose five of the following side-dishes to mix and match: a wedding, a dog, a child, interfering parents, interfering friends, a Big Misunderstanding regarding a smoking hot member of the opposite sex who always turns out to be either gay or a sister, a sudden fear of commitment when no fear of commitment existed prior (let’s call the Deus Ex Matriphobia), the re-appearance of an ex-flame, and a serial killer.

Which brings me back to Here Comes the Groom. On the surface your books uses a lot of these tropes, but it never descends into a cliché. If I had to summarize what I think the skill of a good romance author its, then it is this ability. To use what everyone loves about the romance genre, without letting those conventions take over. And you do this really well. Jo runs a newspaper that her grandfather and grandmother started. Dan’s a sheep farmer and ex-soldier. Jo’s trying to save her business. Dan’s trying to woo Jo. Jo’s gran is sick. Dan helps her. Dan’s parents are fighting. Jo helps him. Dan’s suffering from PTSD. Jo helps him deal with it. There’s a wedding. There are wacky friends who do wacky things. But all of these aspects are used with a great deal of thought and care.

To illustrate my point, let us take the opening scene of the book. Jo’s drunk and in the process of seducing a some yuppie schmo for a one night-stand, when she runs into Dan, who is on his way to the Middle East with his unit:

"Who cares?" Jo planted his palm against her curves.

Brad's brown eyes darkened and he smiled, spreading his fingers to encompass her breast. Leaning closer, he opened his mouth to speak.

Jo jerked her head around to see who the deep, masculine drawl belonged to. "Dan!"

Amused, he lifted his teal-blue eyes from her pushedup cleavage. "No swell- When I heard you were on your own in the Big Smoke, I figured you could use some company." Dan grinned, shrugging his wide shoulders. "Guess I figured wrong." Turning to Brad, he held out a hand. "Dan Jansen-I grew up with Jo in Beacon Bay."

"Brad Wilson. I met her tonight."

"Rea-a-ally?" Dan drawled and she felt the beginning of a blush. "Relax, Swannie," he added. "What happens in Auckland stays in Auckland."

The two men shook hands and Jo squirmed as she watched Brad deliver a bone-crusher. Dan responded by stroking the other man's knuckle with his thumb. Brad couldn't release fast enough. Her best friend looked at her. You can't be serious.

The best part about this scene is that Dan isn’t concerned that Jo is interested in a one-night-stand with a douchie investment banker, but that Jo’s drunk. When he ruins it for Jo, he does mostly just by being there and freaking the guy out. When he figures out it mattered to her, he’s sorry. The point is Jo and Dan are friends.

Dan looked skeptical, and impatiently Jo jiggled her up-thrust cleavage. "Isn't it obvious I dressed to get laid?"

"Can you quit bouncing those things in front of me?"He sounded irritated. "You're making me feel like a pervert."

"That's because all guys are shallow."

"My point is," she said, sticking doggedly to it, "quit with the third degree. I'm not chasing blue-chip investment here. Bad-‘I mean, Brad and I are all about mutual-asset stripping and quick returns."

"You wouldn't have sex with him if you weren't drunk though, would you?"

He held up his hands. "Fine, you've made your point, I'll say goodbye and disappear."

In the time between this conversation and the beginning of the story proper, a lot of things happen to Dan. He loses two of his close friends-‘one of them his cousin-‘in an ambush while in Afghanistan. When he comes home for good, he immediately puts a wedding announcement in the paper without even talking to Jo first.

Jo’s reluctance is understandable. Based on this behavior she has every reason to believe that this wedding thing is somehow related to Dan’s PTSD and his unaddressed grief over the loss of his friends. Plus, you know, he totally rejected her one pass at him. Jo believes that marrying Dan under these circumstances would be wrong. She also believes this because of a secret of her own, one that she’s been keeping from Dan. Not out of contrived Big Misunderstanding-ness, but because she didn’t/doesn’t want to further burden him when he needs time to recover from the death of his friends.

Besides her secret, Jo’s grandmother-‘the woman who raised her-‘has dementia. Everyday her grandmother forgets a little more, confuses Jo with her dead mother, confuses the year. Jo knows she needs to put her in a home, but she can’t let her go. On top of all this emotional and family fall-out, Jo is in the process of trying to save the newspaper business her grandparents’ built. Jo’s refusal to marry Dan makes total sense.

Dan, in the meantime, struggles throughout the book to come to terms with his feelings for Jo, which he isn’t even sure about when he starts this whole wedding business. He also has to learn to let go of the deep sense of guilt he has for not being on the mission when his unit was attacked. He has to come to terms with his sense of responsibility for the death of his friends, his inability to face his godson, and the real reason he wants to marry Jo. Add to that bag of mess the fact that his family is falling apart-‘and not in a quirky, cute way-‘and the man has a lot on his plate.

You convey the complexity of emotions-‘the love, the attraction, the doubts, the other obligations, the fears, the hopes, the exasperation and frustration, etc.-‘that both Jo and Dan feel for each other. But for all that, it is still a funny and delightful romance. You never reduce Jo into a ball-breaking business woman or a petulant child. Nor do you make Dan’s stubborn refusal to accept Jo’s "no" for answer the act of an "Alpha-hole." And that, right there, is why this story is so satisfying. You allow a breadth and depth of emotion for the characters, but you still make it fun to reader. The term is one you coin later in the book. But it isn’t said about Dan. The phrase shows up when Jo calls Dan’s best army buddy an alpha-hole:

Ignoring Jo, Ross opened Delwyn's door. She was leaning against it and toppled sideways with a tipsy giggle. "Oops!"

He caught her falling weight, instinctively bracing on his bad leg. A grimace of pain tightened his features.Diving forward, Jo propped Delwyn to a sitting position.

"Don't you ever listen to good advice?"

"I'm fine." Under the motion-activated outdoor lights his face was ashen.

"Let me guess," she said, exasperated. "Pain is weakness leaving the body." It was a favorite saying of the Special Forces. And in Jo's view, an idiotic one.

"You've got a smart mouth on you, Swannie."

"And you're a stubborn alpha-hole. Go wait in the car."

You set up complex people with complex problems and you don’t let those complex problems be solved by magical sex. Jo and Dan are forced to confront their problems, their feelings for each other and deal with the baggage both of them have from being human. Nobody is a virgin. This is the story of how two close friends, stay friends and become lovers. It is the story of how two strong-willed, independent people who’ve been damaged a lot-‘not by crazy melodramatic things like twins being switched at birth, but by things that happen to people you know-‘learn to lean on each other, and love each other even though they are both still damaged, and may never be whole again. That’s a much better love story than a hard-headed businesswoman/man learning that Christmas is a magical time of year. I will continue to look for your titles in the future because I know now that I can trust you to build complex and interesting characters who actually sound as if they belong to the 21st century. A.