I think your novel Hot Island Nights is splendid—I love the rapport between Elizabeth and Nathan—and I was happy to learn your new self-published novel Her Best Worst Mistake is a companion/sequel to that tale. Her Best Worst Mistake chronicles what happens between Elizabeth’s wild best friend Violet and Elizabeth’s stuffy ex-fiancé Martin when the latter is dumped by Elizabeth eight weeks before their wedding. Violet and Martin loathed each other in Hot Island Nights… or so they thought. 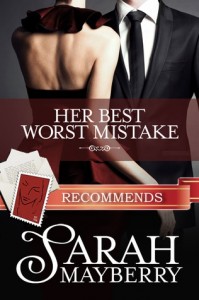 One doesn’t have to read Hot Island Nights to enjoy this book, but it was fun to read them back to back. In the beginning of Her Best Worst Mistake, Elizabeth who has always been a very good girl, abandons both her pressuring grandparents and their protégée, Martin, and runs off to find her birth father in Australia. There she hops right into bed with the super hunky Nathan and is on her way to hot sex and happy ever after. When she leaves England, she leaves Violet for whom Elizabeth functions not only as a best friend but as her family and Martin who, having pulled his way up from a poor North London estate sees Elizabeth as

… a million miles from the girls he’d grown up with. She always knew the right thing to say or do. She was beautiful, refined, elegant. Her love had been the final seal on his success.

Neither Martin nor Violet have ever approved of the other. Violet thinks Martin is an uptight, controlling, dullard whose ambitions have limited Elizabeth’s ability to have fun and discover what she—Elizabeth—really wants from life. Violet constantly criticizes Martin to Elizabeth and every time the three are together, Violet snipes at Martin. She knows she does it, but she just can’t stand the guy.

At the ripe old age of twenty-nine, she should probably have grown out of goading people for sport, but for some reason she never tired of poking Martin with a stick to see how long it would take before he growled and snapped.

For his part, Martin thinks Violet is excessively outrageous and loud. He thinks her wardrobe is right out of the “Playboy catalogue,” she does nothing but calls attention to herself, and is a brat to boot. Once he realizes Elizabeth has truly left him, he tells Violet,

“There are many things I will miss about sharing Elizabeth’s life, but spending time with you will not be one of them. I can honestly say that I have never been more…relieved to think that I need never lay eyes on a person again. Was that polite enough for you, Violet, or should I drop a few four letter words in there so you feel more at home?”

But Martin is wrong about Violet. She’s not a self-absorbed bitch and, in fact, when she thinks about how devastated he must be having been dumped by the woman he’s dated and loved for six years, she decides to check up on him and brings him a bottle of peach schnapps as a sympathy gift. Martin is nasty to her and refuses her offering, but she leaves it for him anyway. Later, at his very lonely house, he sips the drink and begins to wonder why the hell she brought him that particular present.

He didn’t usually have a sweet tooth, but when he’d tried schnapps for the first time at a West End bar last year he’d discovered that there was something about the sweetness of the peach and the heat of the alcohol that appealed to his palate.

He lifted the glass to his mouth again, then stilled as it occurred to him that Violet had been there that night, too, lolling against the bar in a purple sparkly dress that had been too short and too tight and too bright.

And when she’d gone looking for a pity gift for him, she’d bought him peach schnapps, out of all the options open to her at the off-license.

Which meant it was either a coincidence… or she’d remembered that night and how much he’d enjoyed the schnapps.

He downed the last of the drink.

It was probably a coincidence. There was no reason for her to remember such a small, insignificant detail about him. Certainly there hadn’t been anything special about that night to mark it in her memory—it had been a night like any other, one of many times he’d socialized with Violet for Elizabeth’s sake….

He reached for the bottle and poured himself another drink, almost filling the glass this time.

As though he’d opened a floodgate within himself, a storehouse of Violet-tinged memories fell out. The fact that she hated escargot but adored truffles. The fact that she’d once queued for days to buy tickets for a George Michael concert. The fact that she absolutely refused to learn the names of any players for any of the country’s football teams, even though it required a concerted effort to forget the headlines and news reports focusing on the country’s national obsession….

Martin, drunk on schnapps, shows up just as Violet is closing up her boutique, the wittily named Violet Femmes, and demands to know why she bought him peach schnapps. That question leads to explosive sex on Violet’s couch after which both Violet and Martin are appalled at their behavior. Martin does a fast walk of shame out the door while Violet hides in her bathroom. Martin tells himself it was a

Violet is consumed by guilt. She has broken a cardinal rule: never have sex with your best-friend’s ex. Elizabeth has been the most important person in Violet’s life ever since Violet’s ghastly father and step-mother kicked her out of their house and lives when she was nineteen because of her “Jezebel” ways.

And Violet had just repaid Elizabeth’s loyalty and love and thoughtfulness and generosity by fucking her ex-fiancé on the couch.

Both are sure it will never, should never happen again, but, the next time they see each other, at a dinner party a month later, they are out the door, in Martin’s vintage Jag and polishing his backseat until the windows are completely fogged over. Again, Violet is furious at herself for betraying Elizabeth. She tells Martin,

“Let’s just agree that this was yet another stupid, impulsive mistake that happened for God-only-knows-what reason and leave it at that. You go your way, I go mine.”

Martin, however, has begun to see the situation differently. He realizes he’s falling for Violet and, from his perspective, having a relationship with her has, at this point, nothing to do with Elizabeth. He isn’t sure how someone as outré as Violet will fit into the straight-laced, ambitious lawyer life he has created for himself but he’s unwilling to give her up.

A few days later, he drops by her shop and the two begin seeing each other every night. The sex is fabulous–there’s a lot of sex in this book–and they enjoy each other’s company. And yet, though Violet talks to Elizabeth every week, she never tells Elizabeth she’s seeing Martin. Not only does this bother Martin, it bothered me.

I get it’s bad form to sleep with your best friend’s ex. However, in Her Best Worst Mistake, Elizabeth is now over the moon happy with another man. She’s the one who ended her relationship with Martin. Plus, Elizabeth really loves Violet. I was sure if Violet told Elizabeth, “Hey, it turns out I was wrong about Martin. He’s really a great guy, he treats me like a queen, and I think I might love him. Is that OK with you?” Elizabeth would have given her a double thumbs up.

Fortunately, Violet’s character is so well-written that, even though I found her behavior frustrating, I understood it. Violet has already lost her family of birth. Their rejection of her scarred her deeply. She is terrified of losing her family of choice: Elizabeth. I enjoyed watching Violet—I can’t resist—bloom under the patient care and love Martin gives her. When she doubts her own worth, he makes her see what a wonderful woman she is. At one point, she sobs,

“I don’t deserve you.” His arms tightened around her, a fierce, indomitable band of muscle and sinew. “You do, Violet. And I deserve you. We’ve both more than earned our chance at happiness. And I will not feel guilty about grabbing it with both hands, and I won’t let you feel guilty, either.”

Martin, who really did limit Elizabeth, turns out to be just the man to free Violet from her injurious past. I loved their story—Ms. Mayberry, yet again, you’ve written a novel with heart, heat, and healing. Plus, you worked in an offhand reference to Tenzing Norgay. I stand in awe. This book gets a flat out A.

→ Dabney
Previous article: What Sunita was reading in March and April
Next Post: Friday Film Review: The Wrong Box