A few months ago, I was looking to buy another retelling of the Cinderella fairy tale and your book, “Ella’s Big Chance – A Jazz Age Cinderella” was recommended to me at the same time. Intrigued by the setting and cover illustration, I bought it as well. Though I love the Cinderella story, I acknowledge it has its drawbacks – namely that though the heroine gets a man who loves her, he seems to have trouble recognizing her without her footwear. Your version takes that into consideration and then goes it one better. 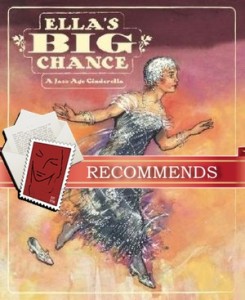 Mr. Cinders might be a talented dressmaker with a nice little shop but his red headed daughter Ella is the true artiste in silk and satin. Together with delivery boy Buttons, they make sure the store is always bustling. One day, Mr. Cinders married a widow with two daughters of her own. Soon though, Pearl and Ruby along with their mother, begin to behave spitefully to Ella – forcing her to work long hours making beautiful clothes and to move into the basement with no one but Buttons and an old grey cat for company. Hen pecked Mr. Cinders seemed unable to do or change anything. One day, the Duchess of Arc swept into the store and was fussed over and flattered by Mrs. Cinders as she watched Ruby and Pearl model the beautiful dresses. Soon an invitation to a grand ball to be held by the Duchess arrived at the store. Poor Ella had to work harder than ever on dresses for her step-mother and step-sisters then got left behind when the rest of the family left for the big event. Disheartened, she cried into the grey cat’s fur.

But a tap on her door brought her out to the kitchen where Buttons promised to cook her a meal. Suddenly a stranger arrived – an older lady who announced that she is a Fairy Godmother. With a tap of her furled umbrella, she turned Buttons’s delivery bike into a shiny grey limousine and the cat into a uniformed chauffeur. Then she sketched a shape in the air and Ella’s shabby black dress was transformed into a glittering flapper gown. Off to the ball Ella went with instructions on when the magic would wear out.

There she dazzled the Duchess’s son the Duke with her lively wit and infectious sense of fun. Time flew until the striking clock called Ella back to reality. Fleeing away, all she left was a glass shoe before the magic wore off, leaving her to push the bike back to the shop while the disgruntled cat made his own way home.

Determined to find this stranger who touched his heart and enchanted him as no other had ever done, the Duke set off to find her. Finally he arrived at the dress shop but neither Ruby nor Pearl could force a foot into the glass shoe. About to leave, he spied Ella in the shadows. At last he’d found her! But will everything go according to fairy tale plan?
As soon as I began to read the book, I could tell that it would be different. Mr. Cinders is present throughout the whole story but once he’d made his colossal marriage blunder, frankly I wanted to give him a swift kick in the pants. Being milquetoast is one thing but watching your beloved daughter’s life be made a misery is another.

Still, the setting and the fantastic illustrations of jazz age fashion – and I can tell why these won you your second Kate Greenaway Medal – kept me going. Plus Ella isn’t the standard wafer thin, “oh, all she needs are nice clothes” beautiful. Ella has a lovely mop of red hair and is, to put it gently, a little plump. A plumb Cinderella? Yes, indeed and she’s cute as a bug’s ear. She also knows her own mind and isn’t afraid to stick to what she wants. And here is where I fell in love with this book. All through the story, I felt a little off. There is a character here not usually in the standard story and as Ella heads off to the ball to dance the night away and charm the Duke, I was uneasy. Okay, if Ella and the Duke fall in love and get married, it’ll be alright but …. but ….something just didn’t feel right. Until you made it right with a neat change to the story which had me grinning from ear to ear. Ella got her man and has wonderful plans for a future – including the grumpy, grey cat – and I couldn’t be happier about them or the way the story ends. Brava! A
~Jayne