REVIEW: Eleven Scandals to Start to Win a Duke’s Heart by Sarah MacLean

I read this book back in February of 2011. I remember the date clearly because I started reading it the night I got to the Tools of Change convention. Angela James, Jenny Bullough (of Harlequin) and Sarah Wendell and I went shoe shopping the following day at what is seems to have become an annual event. The problem is I didn’t really want to go shoe shopping. I wanted to finish my book. So I kept reading. While they tried to talk to me in the taxi. While they walked me down Lexington Avenue. While they gathered shoe boxes about 6 feet high. I really wanted to finish the book. Yes, finishing this book was more important to me than buying shoes. There’s your endorsement. 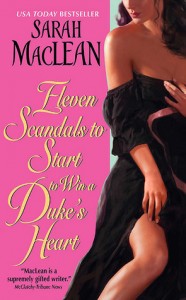 Despite the frothiness of the title, this book has quite a bit of meat to it. Miss Juliana Fiori is the half sister of the twin brothers who are featured in the first two books of the series. The hero is Simon, the Duke of Leighton. It is a classic tale of opposites. Juliana lives a life of scandal, thumbing her nose at societal conventions in every way she can without actually stepping over the line to be ruined. Simon is vying for the most virtuous man in society, in part out of duty and in part out of desire.

Juliana was born a scandal. Her mother was the former Marchioness of Ralston who ran out on her family with Juliana’s father, an Italian merchant. Her mother then abandons said Italian merchant and Juliana. When Juliana’s father dies, her guardianship is given over to her half brother and she is shipped to England where society views her as a lesser because of her mother, her birth, and her family. Juliana struggles with both wanting to be liked and fit in and disdaining the rigid morality. In order to prevent herself from being hurt by those who look down on her Juliana decides that the societal mores are for the dull and uninspired. If she cares about being a scandal, then she’s doomed to live in misery because society already hates and despises her. Over the course of the book, we see that Juliana is both right and wrong. She is right that she is viewed as a scandal but she is wrong to think she couldn’t have overcome some of the opinions of those who occupy the ton but in flaunting the rules, she is pushed farther and farther to the margin. As Simon notes:

Scandal was not her choice.

It was her burden.

Her bold words and her brave face were not borne out of pleasure but out of self-preservation.

When acts occur that make Juliana truly beyond the pale, she learns what true scandal is like and it is this sort of scene that impresses upon the reader what Simon is trying to avoid for those that he loves. The women of the ton turn from talking about her behind their fans to actually publicly attacking her to her face and Juliana begins to see the painful price of being considered a scandal.

Even his mother says to him:

” The duchess leaned forward and steeled her tone. “She is so far beneath you, she’s barely good enough to take to mistress.”

Juliana’s pain is so poignant. Her longing to be loved and accepted was palpable. Her heart was the opposite of the grinch. It was too sizes too big. And I loved where she decides that she is a person of worth and that she is deserving of someone who can love her without reservation, even if that someone is not Simon.

Simon has very good reasons to want to marry well and live a life of propriety. If anyone has read Ten Ways, the second in the series, they’ll know why but essentially he fears what Juliana suffers at one point in the book. Where the people of society, his peers, turn on him and generally make him and his family outcasts.

[spoiler]Simon’s unwed sister is having a baby out of wedlock.[/spoiler]

As Simon spends more time with Juliana, he realizes how passion can overcome the best intentions. He begins to act in ways that are anathema to him and to his beliefs. His passion for Juliana leads him to act as a rogue and rake and he despises his own weakness. Simon is also good friends with Juliana’s brothers. His actions toward them and then his actions toward their sister make him realize what a hypocrite he is. Simon’s downfall, however, is necessary for him to realize that a life without passion would be empty and just as painful as life being cast out of society.

The great thing about this book is that within the course of romance, Simon and Juliana grow as characters to the extent that their character arcs cross each other and kind of flip as Simon races toward more scandal and Juliana tries to embrace more propriety. The rigidity of both their positions is highlighted and you see the flaws in both their positions. Juliana learns that one can’t be ruled by passion at all times and Simon learns that rigidity of moral position is no comfort at night.

There was such respect in this book for the reader. I felt like this is one of those books carefully layered where each scene, each word has meaning and I could re-read it a dozen times and still discover new things in the story. It’s an A book for me.

→ Jane
Previous article: Monday Midday Links: Beverly Barton has passed away.
Next Post: Is there Such a Thing as Feminist Sex?