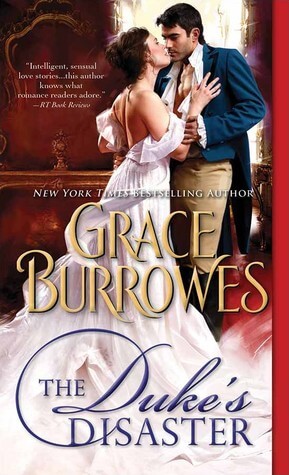 Upon reading the blurb for The Duke’s Disaster, I found myself utterly charmed – and intrigued. Much of the “classic” Regency romances seem to center around certain inviolable strictures of society that Must Not Be Deviated From. You know the ones I’m talking about – the heroine must always be chaste, the hero must be an academic or a rake or in some way tortured, the loving couple must want to flaunt the conventions of the ton but dare not do it in public, etc. I’m thrilled to say that you managed to take those tropes and tweak them ever so slightly to turn what was merely very good into something magnificent.

Lady Araminthea (Thea) Collins has been in service as a companion since just around her eighteenth birthday. When other young daughters of nobility were busy making their curtsy, Thea was too busy trying to keep her clearly-too-young-to-inherit older brother and much younger sister out of trouble and in good standing with Society. Now that her current charge, Marliss, is betrothed, and her services will no longer be necessary, she’s thinking about finding her next position. That is, until Noah Winters, Duke of Anselm, decides that if he can’t marry Marliss, he’ll ask for Thea’s hand instead. Noah and Thea had spent a good bit of time together while he was courting Marliss, and Noah has reached the point where a wife is a necessity. Just as Thea’s about to politely decline, Noah makes her an offer she’s hard pressed to refuse – he offers to ensure her sister is properly set up, dowered and settled.

There’s just the small matter of Thea’s tiny little dark secret. Of course, Noah can’t be TOO angry with her – given he has one of his own.

I found it absolutely refreshing that the story focused not on their walk to the altar, but on what happens once the wedding is over and the fuss has died down. For once, there were no be-feathered matronly tabbies lurking in the corners, no Season crushes or musicales. This was a simple story about two people making the best of what begins as a slightly bad situation, and being adults about it. Aside from one fairly minor spat, the focus is on Thea and Noah learning to live together and settling into their new roles of husband and wife. Their entire focus is each other – not who’s giving whom the cut direct, who wore what best, or contrived scenes of author-engineered discord.

Here were two people feeling their way around a major change in circumstance while at the same time navigating their responsibilities to each other and their families. It was done with heart, joy, and no little amount of humor. I actually recognized several scenes between Noah and Thea – similar events take place at my own house, between my husband of almost two decades and myself. I think the little intimacies tend to get lost in most historical romances, and their inclusion here is part of what makes this book so enjoyably unique.

One of the other things I absolutely adored was your focus on characterization. Everyone was fully developed, and just about every character was someone I would love to have met and spent time with. Noah’s sisters and Thea’s brother were characters who felt as though they were friends of mine. The interplay between all of the characters was detailed enough that I felt as though I were right there in the room. Though, more importantly, I felt as though I were part of the story, an active participant. It’s rare that I find an author who can draw me in so completely and make me –feel- the story.

While I don’t think there’s much new ground to be covered in the land of Regency romances, you took what had been done before and made just enough adjustments to make it feel new and exciting. Readers who are fans of the glitz and pageantry of the social whirl may not find themselves as enamored of your stile as I am, but those who enjoy the subtle psychological intricacies of romance will no doubt fall in love. A

→ marykate
Previous article: REVIEW: The Mésalliance (Rockliffe Book 2) by Stella Riley
Next Post: REVIEW: The Fighter and the Fallen Woman by Pamela Cayne