The first book I assigned my continuing education class on Georgette Heyer at NC State was Regency Buck. The second was Cotillion, which I actually taught last week. As one of my students said, “It’s just delightful.” 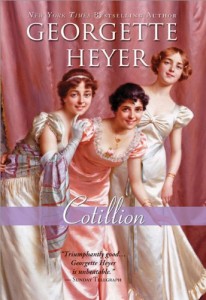 Cotillion shows up on “Favorite Heyer book” lists all the time, and I never really understood why. I mean, I’d read it, of course — I read (almost) all of Heyer’s historical romances. But in the sub-sub-genre of Regency romance that Cotillion belonged to (not smart heroes), I preferred Friday’s Child. But I assigned Cotillion because other people apparently loved it so much. And I’m glad I did, because it meant I had to read it again. And I loved it.

Kitty Charing is a penniless orphan. She’s lived her entire life with the friend of her father who is exceptionally wealthy but utterly miserly. She has no money of her own and Uncle Matthew feels obligated to leave his money to someone in his family. So he invites all his grand-nephews (who are of age and unmarried) to come to visit and offer for Kitty and Uncle Matthew will leave his money to the grand-nephew who marries Kitty. This way Kitty is provided for and the money stays in the family.

Three cousins show up, only two of whom are eligible: Lord Dolphington, an Earl who is slightly mentally retarded (there’s a throw-away line about him being a seven-month babe), and the Reverend Hugh Rattray. Hugh’s brother is also there, to bring Hugh up to scratch, but he’s married and Uncle Matthew doesn’t like him. Three cousins are missing. One’s in the Army of Occupation and we never hear from him. One is Freddy, the heir to a Viscountcy and himself not the brightest candle in the wall sconce. The other is Jack, the dashing and bold man-about-town who Kitty has loved for years. She’s furious that Jack didn’t show up, so runs away in pique. She meets Freddy at the local inn, partaking of dinner before he shows up at Uncle Matthew’s. She convinces him to fake an engagement so she can go to London — just for a month. She wants to make Jack jealous and realize what he’s missing.

So, she goes to London…and unwittingly falls in love with Freddy and he with her, thoroughly overturning Jack’s plans.

I asked my students what Kitty and Freddy learn, and we found something, but it’s so slight: she learns what a true hero is; he learns to grow up a bit. And although this isn’t profound, it doesn’t have to be. You just adore the characters anyway. And this is an utterly character-driven book. Nothing HAPPENS, but nothing has to happen because you’re having too much fun anyway.

And the characters are constructed in such a way that make the plot happen utterly naturally and perfectly. For example, Dolph is able to find his happiness because Uncle Matthew despises Dolph’s mother. Uncle Matthew’s dislike is set up at the very beginning of the book and seems perfectly natural and just the crotchets of an old, disagreeable man and don’t need to mean anything else. But they do mean something important by the end of the book, but it doesn’t look labored at all.

At the end of the book, there are four happy couples — it’s better than Shakespearean comedy.

But the book really is Freddy’s. He’s ridiculous and his sexuality is questionable (he’s a Pink of the Ton and very much NOT “in the petticoat line”), but he makes an amazing hero because Heyer does such a wonderful job of showing what makes a true hero. Kitty says at one point:

“Freddy is the most truly chivalrous person imaginable! . . . and a great deal more to the purpose than all the people one was taught to revere, like Sir Lancelot, and Sir Galahad, and Young Lochinvar, and — and that kind of man! I daresay Freddy might not be a great hand at slaying dragons, but you may depend upon it none of those knight-errants would be able to rescue one from a social fix, and you must own, Meg, that one has not the smallest need of a man who can kill dragons! And as for riding off with one in the middle of a party, which I have always thought must have been extremly uncomfortable, and not at all the sort of thing one would wish to happen to one — What is the matter?”

Meg raised her head from the sofa-cushions: “He w-would say it was not at all the th-thing!”

“Very well, and why should he not?” said Kitty, refusing to share in her hostess’ unseemly mirth. “If you were to hear of such a thing’s happening, you would think it most improper, now, wouldn’t you?” A sudden thought occured to her, and she choked, and said, in an uncertain tone: “As a matter of fact, he said that Lochinvar sounded to him like a d-dashed loose-screw!”

The Cotillion dance, according to Wikipedia, “The Cotillion is a type of patterned social dance that originated in France in the 18th century and was originally made up of four couples in a square formation . . . Its name, from French cotillon, “petticoat”, reflected the flash of petticoats as the changing partners turned. The Cotillion, of repeated “figures” interspersed with “changes” of different figures to different music, was one of many contredanses where the gathered participants were able to introduce themselves and to flirt with other dancers through the exchange of partners within the formation network of the dance.” This is an exact metaphorical description of the book: flashes of petticoat and couples forming and reforming in order to flirt. As my student said, utterly delightful.

Next up: Sylvester! and a visit from Sabrina Jeffries.