REVIEW: Champion of the Scarlet Wolf Book One by Ginn Hale 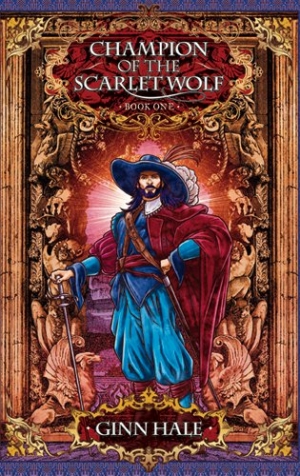 Five years after abandoning the Sagrada Acedemy, Elezar Grunito has become infamous in the sanctified circles of noble dueling rings for his brutal temper and lethal blade. Men and women of all ranks gather to cheer and jeer, none of them knowing Elezar’s true purpose. But a violent death outside the ring marks Elezar as a wanted man and sends him into hiding in the far northern wilds of Labara.

There, creatures of myth and witchcraft—long since driven from Cadeleon—lurk in dark woods and prowl the winding streets. Soldiers and priests alike fear the return of witch-queens and even demons. Elezar soon learns that magic takes many forms, some too alluring to resist, others too terrible to endure. But just as he begins to find his place in this strange new country, the past he left behind along with his school days returns to challenge him once again.

So far your books (and couple of other authors, but we are talking about your books now) have been the examples I most often point to when asked what kind of stories I want to read in the m/m genre (and any genre, really). These books are no exception. I say “books” because this is the first installment of a two-part story. The story is in turn a sequel to “Lord of the White Hell”. It is a loose sequel, because even though the main characters from the “Lord of the white hell” show up somewhere in the last quarter of this book (and probably participate in the events of the second book even more) the book is mostly not about them. I am trying to decide whether a reader can approach it as stand-alone, and I think you can, even if you will miss some references to the past events. Having said that, why would you want to do that? If nothing else, I am sure you will understand after reading “Lord of the White Hell” why I craved a happy ending for Elezar pretty much since I finished the last page of that book.

The blurb is excellent because it gives you a set up for the story without revealing much. The blurb being that vague leaves me with the complicated task of trying to talk about the story without spoilers because as I said, almost nothing of importance is revealed in the blurb and I do not want to spoil it for you. But I do have to spell out more details in the setup of the story.

As the blurb tells you, Elezar became an excellent duelist, having challenged many and killing quite a few men during those duels. However, after killing an innocent man in a duel (even though it was to protect a friend because that friend just had to get to sleep with the wife of that man), Elezar and Atreau have to run. Luckily Fedeles, the Duke of Rauma, offers them a reprieve because they are his friends, and because he thinks this is going to be the final repayment for what they did for him in “Lord of the White Hell”. Fedeles wants Atreau to pose as him and to meet his new bride, and he also wants to give a diplomatic mission to Elezar, whose disguise would be to pose as his varlet. We learn that this diplomatic mission would have been his, even if he did not have to run from the revenge of the deceased man’s family.

Elezar and Atreau go to the capital of Rauma County in Labara – Milmuraille (the pronunciation and spelling of this name and several others is the only issue I had with this book. I think the world building here is fantastic, but I would have liked to have an easier time trying to figure out the pronunciation and spelling of some of them). There is a complicated history between several countries in this universe, but to make a long story short, Labara is under Cadeleonian protection after war, while Mirogoth is completely independent and the territory is divided between four tribes with each tribe having a grimma (witch queen). Milmuraille has its own witch queen also as a consequence of war, and I think Mirogoth would not attack Milmuraille until her witch flame is burning brightly in the sanctuary.

To make matters more complicated, Elezar’s mission is to go and talk to one of the four Mirogoth grimmas, Drigfan. She is the Sumar grimma, and Sumar is the most powerful tribe of Mirogoth. Cadeleonian prince Sevanyo wants Elezar to find a way to convince her not to raid Cadeleonian monasteries anymore and stop killing the Cadeleonian monks who go in her forest, to teach her people their religion.

“Of the four Mirogoth tribes, the Sumar people were the most powerful. Their territories bordered Labara directly to the north. Nearly a hundred years ago a coalition of Mirogoth tribes had swept through Labaran peninsula to penetrate deep into Cadeleon. Elezar’s own ancestors had been among those who had driven them back through Labara into their forest holdings. In the process of being twice overrun, Labara has lost her king and broken into several counties, which had all fallen under Cadeleonian protection”.

I do not want to give you the impression that the book is engaged in information dumping. This quote is probably the longest one which describes the history in one sitting, but it is given to the reader at just the right time and right place in my opinion. The book starts with an action sequence (Elezar saving Atreau from the consequence of another one of his love pursuits) and it has plenty of action overall, but it also gives reader opportunities to catch a breath and sometimes relax with the characters. I thought the story was paced very well.

In Milmuraille Elezar finds himself right in the middle of problems which concern the Milmuraille witches, however very soon it may concern Cadeleon as well. Apparently the Milmuraille Grimma is dying after a bizarre encounter with unknown magic and his witch flame is weakened as well. In the meantime that magic threatens every witch in Milmuraille, and Elezar meets Skellan, another witch who is very much involved in these events. Unfortunately I really cannot tell you anything about how they met, because it would spoil some of the fun, nor can I tell you about how Skellan is involved in events with the Milmuraille Grimma Ozir. Let’s just say that he is right in the middle of that.

I loved that despite a fast moving fantasy plot, the romance storyline was given a lot of attention and care. Somehow amongst all the danger and problems and intrigue, two men find themselves growing closer and closer together. I think this is actually a slow burn romance, which is always my favorite type. I cannot stress strongly enough that I think that romance storyline was not sacrificed at all – I thought it was perfectly meshed with fantasy action. I always say that in a decent adventure story I am willing to forgive Insta!Love type of attraction, but this book shows that it does not have to be that way. It is possible to develop both storylines with the same care. The relationship builds up slowly and eventually we are given some very satisfying payoff (and as I am typing this I have not even read the second part yet, although of course I checked the ending ).

I liked how the widespread trope in m/m – protagonists having tragedies in their past — was used here. Specifically I liked that while tragedies of course shaped who Skellan and Elezar were, it did not make them unable to function. I do not think that everybody is born or should be a hero, but I think that both men in this book had heroic potential and had already started to fulfill it. I cannot wait to see how everything will come to a great conclusion.

Honestly, I cannot find what I did not like in this book. The magic takes all kinds of forms, and it is imaginative and fascinating, but I always like reading about how magic works. We have interesting creatures, we have witches who can do all kinds of things and while I am sure more interesting reveals are to come, I loved what I already learned. Here is for example how Skellan at some point gathers magical strength to cure Elezar’s wound.

“You’ve done this before, I hope?” Elezar asked.

“Don’t disturb me. My spirit must abandon my body to search for the means,” Skellan responded. His own words and flesh felt distant already. His senses drifted like an exhalation of breath. Only the finest red thread anchored him to the body crouching at Elezar’s side far, far below him.

Skellan focused intently, reaching out across the twilight streets of the city to those hidden recesses where fragments of derelicts and forgotten spells lingered. Disused wards lay like splintered sapphires within the gray stones of doorsteps and windowsills, tattered pink love knots wriggled in house timbers like hungry beetle grubs. Cracked candor stones glinted like bright pebbles from the mortar of garden walls, and the names of strength and valor faintly sang out from the heap of tinder that had once been a ship hull.

Skellan held the neglected spells in his mind like scattered bells collected from a dozen shattered chimes. Notes clashed, others reverberated as he sounded them out. He felt their purposes burn like embers against his fingers as he turned and twisted them to his own use. Before his glazed eyes geometric forms in luminous colors blazed and flickered, slowly taking on a harmony of light and sound, as he aligned them to reflect and resonate one another.

At last one odd, but complete spell hung before him, restrung from the abandoned endeavors of dozens of other witches. Not a shred of it arose from the forge of Skellan’s own scarlet witchflame, but still the whole form bore the stamp of his creation. “ (28%)

The book does not exactly end with a cliffhanger, but you will want to start book two right after you finished the last page.
Grade A

→ Sirius
Previous article: More on The Internet of Things
Next Post: DABWAHA – Time for the Reader Nominations