I thought about reviewing the two volumes of Captive Prince separately, but came to the conclusion that since they are two parts of the same story and absolutely must be read in order, this made no sense. I understand that there will be a third volume out in 2014, and I will wait with bated breath until then, because I’m dying for more of these characters and their story. 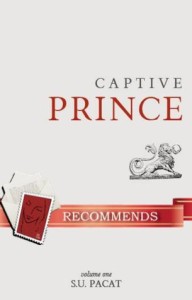 Captive Prince has an interesting provenance. It began as a serial on the web. It is not fanfiction in the sense that it’s not based off of any other author’s characters, but it was written for an online community. The online version has some differences from the published version, but it is still available here for free.

Volume 1 is disturbing, but good, and must be read before Volume 2. But Volume 2 is where it’s really at, because there the story gets mind-blowing.

On to that story.

Here’s the author’s blurb for Volume 1:

Damen is a warrior hero to his people, and the rightful heir to the throne of Akielos, but when his half brother seizes power, Damen is captured, stripped of his identity, and sent to serve the prince of an enemy nation as a pleasure slave.

Beautiful, manipulative and deadly, his new master Prince Laurent epitomizes the worst of the court at Vere. But in the lethal political web of the Veretian court, nothing is as it seems, and when Damen finds himself caught up in a play for the throne, he must work together with Laurent to survive and save his country.

For Damen, there is just one rule: never, ever reveal his true identity. Because the one man Damen needs is the one man who has more reason to hate him than anyone else . . .

And the blurb for Volume 2:

With their countries on the brink of war, Damen and his new master Prince Laurent must exchange the intrigues of the palace for the sweeping might of the battlefield as they travel to the border to avert a lethal plot.

Forced to hide his identity, Damen finds himself increasingly drawn to the dangerous, charismatic Laurent. But as the fledgling trust between the two men deepens, the truth of secrets from both their pasts is poised to deal them the crowning death blow . . .

I’m typically not keen on romances involving slavery — I could not enjoy Justine Davis’ Skypirate books, or Song of Scarabeus, which so many readers loved a few years back, because I found the slavery too disturbing.

And it was disturbing as hell for me in Volume 1 of Captive Prince, too, I don’t want to imply otherwise. But the great plotting and the characters kept me glued to the pages.

The book starts out a bit like a car accident that you can’t look away from. The hero, Prince Damianos of Akielos (known as Damen) and heir to the throne of his country, is attacked unexpectedly thanks to a coup by his older, illegitimate half-brother Kastor. There are too many attackers for him to fight off and he is bound, gagged, put in a gold slave collar and wrist cuffs and shipped to the enemy country of Vere.

When Damen arrives in Vere, he realizes he is believed to be dead and no one in Vere knows his true identity. He is presented as a gift to the Crown Prince of Vere, Laurent, from the new King of Akielos, Kastor. Laurent takes the gift as insult, since Damen, who hates all Veretians, is deliberately insulting, and also since Laurent is told the slave’s name is Damen.

You see, Prince Damianos of Akielos, whom Laurent assumes Damen is named for, killed Laurent’s beloved older brother Auguste in battle several years earlier. Laurent, now twenty but thirteen at the time, was left orphaned in the same war, and under the care of his uncle the regent, since by Veretian law, he can’t ascend to the throne until age twenty one. And Laurent and his uncle have bad blood between them.

If only he knew that Damen is the one Akielon who actually killed his brother… but he doesn’t, and Damen realizes his survival depends on his ability to conceal this.

For the longest time, Damen thinks Laurent is a spoiled, cruel, decadent young man and his uncle the Regent is wise and worthy of Laurent’s respect. But things aren’t what they appear to be in Vere. There are all sort of machinations going on behind the scenes, and no one is the same as the front they present to the world.

Damen is in over his head, but eventually he realizes that to help his countrymen, he must join forces with Laurent, of all people.

The romance is very, very slow to develop and the sexual tension is through the roof. The balance of power, which at first glance seems lopsided, is actually a lot less so than initial appearances suggest. And once these two fall in love — wow.

It is such an impossible conflict because (A) their countries are sworn enemies, (B) Damen killed Laurent’s beloved older brother, and if Laurent knew! And (C) they are both the rightful heirs to their thrones and doesn’t that mean marriage to produce legitimate heirs?

However, you have promised a HEA in Volume 3 and the strength of your writing is such that I believe you can deliver. Your prose has clarity and simplicity but is also poetic at times because the words have a way of gathering power. With the exception of a brief prologue, the book is written in Damen’s third person POV alone, and yet you manage to make Laurent at least as compelling. Both characters are real and complex and they grow.

Damien is strong, honorable and straightforward, but at first glance too naive for a 25 year old crown prince. Gradually he grows out of that and catches on to more and more of what’s going on around him. His strength of will shows in the ways he finds to be more than simply a pawn. At the same time a more complete picture of him slowly emerges.

Laurent is reminiscent of Dunnett’s Lymond, a character who is usually three steps ahead of everyone else, and whose interior does not match his exterior. At first we think he’s an out and out villain, and then we realize that is not exactly the case. His cleverness and scheming can be infuriating, but as more and more of the truth emerges, it becomes impossible not to fall in love with him bit by bit.

But one of the most wonderful things about this book is the plotting — it’s full of surprising twists, secret political maneuvers, and devious stratagems. There will be some little detail in the middle of the book, and later in the story the reader suddenly discovers just how important that small detail was, and that things aren’t what they appeared in any way, shape or form.

While the romance develops with exquisite slowness, as is fitting to these characters’ backgrounds and personalities, the pacing of the plot is fast and the book is hard to put down.

I love this kind of story. As for my criticisms, I have a few. Female characters are few and far between in Captive Prince. On occasion, I hit a line of contemporary-sounding dialogue, such as “No kidding,” that was jarring in the historical setting. The writing is less polished in the beginning, with some stylistic cliches and an overuse of adverbs, but this improves.

Also, while the worldbuiding was very good in terms of its internal consistency, and in terms of developing the cultural differences between Akielos and Vere (there is a very good portrayal of what it’s like to be displaced into an unfamiliar culture), I wished the world was fleshed out a bit more. For example I would have loved to know about the religions of these countries, the monetary system, the roles of regular people and of women.

Volume 1 does not make for comfortable reading. Rape and abuse take place in the first half of that volume. This is the kind of book where the price of admission may mean putting up with squick factors and triggers but there is a huge reward in return for that in Volume 2. By the time I finished the end of the second volume, I realized none of the upsetting/disturbing/triggering things had been gratuitous.

There will be a third volume, as I said before, but it won’t be out until 2014. I’ll be obsessively checking for news of it in that year, that’s how much I want to read it. Volume 2 ends on a huge cliffhanger, but one that comes after rewarding payoffs, so the ending managed to leave me salivating for the next book yet deeply satisfied at the same time.

If I were to grade Volume 1 by itself, I would give it a B, mainly because it’s so disturbing and not everything makes sense yet, even by the end. But Volume 1 is not meant to be read on its own. When I got to Volume 2 (which must be read after volume 1), I realized that a lot of things in Volume 1 were setups for payoffs that occur in Volume 2. Therefore I would advise everyone who wants to try Captive Prince to read both volumes, in order.

Despite the imperfections, my grade for Volume 2 is easily an A and for both together, an A as well, because the cumulative effect of reading them back to back is mind blowing.

ETA: Captive Prince is now available on Kobo as well.