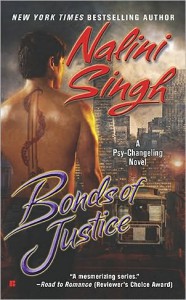 Being human in the Psy/Changeling world you’ve created must suck. Humans are at the very bottom of the Darwinian food chain, with both the Psy and Changelings well ahead of them in terms of mental and physical development. Or so it would seem from a peripheral reading and understanding of the world you’ve created. To make a human appear both desirable and powerful within this construct, without changing or giving him or her some sort of secret edge, isn’t easy. In  Bonds of Justice, you have accomplished it beautifully. I’ll make no bones about it: I  totallywant Max Shannon.

Max is a human cop in heavily Psy-influenced Enforcement, which shouldn’t automatically preclude him from advancing; the Psy think of humans as weak and malleable and when they want cops to look the other way they simply plant a mental suggestion that a human cop do so. But Max has a natural strong mental shield (no, this is not crazily unusual in humans), preventing the higher-ranked Psy officers (or anyone, for that matter) from planting suggestions, making him overlook evidence, or anything a "crooked" cop would do. Max also happens to be a very smart guy and an excellent cop, and realizes that he couldn’t live with himself knowing that his morals had been compromised.

After successfully incarcerating a serial murderer, Max is introduced to Sophia Russo, a J-Psy that has been put on the case after other J-Psy failed at extracting the location of the murderer’s victims. The J, or Justice, Psy have the special ability to delve into a person’s mind, extract a memory and project them in full to another person, a courtroom, or a jury. Unfortunately, the J designation is known to "retire" (read: be turned into a vegetable by Psy rehabilitation) early in their careers as a result of their special ability. When Sophia meets Max, she knows she’s getting close to rehabilitation, and had decided that the moment she finds out that she’s to be rehabilitated, she’ll suicide before being turned into a shell of what she is. She’s aware of her deterioration, but refuses to give up or give in.

Max is immediately intrigued by the juxtaposition of Sophia’s strength and vulnerability even though he knows that the chances of seeing her again are slim at best. Then Max is called by Psy Councilor Nikita Duncan to investigate a string of suspicious murders. Nikita has used her influence to have Sophia put on the case as well. On the surface, having a human cop work a case for a member of the Psy Council seems like a weak plot turn, but rest assured that there is nothing weak about the plot in this book. Nor is there anything weak about Max and Sophia’s relationship. Neither of them shy away from their obvious attraction. Rather than beating about the proverbial bush, they ask for, and receive, each others’ trust. There is  a lot going on in this book in terms of overall series plot; however, Max and Sophia’s interactions do not read like a secondary plot. They are riveting and I couldn’t get enough of them together. Max and Sophia were so hot together that before they even managed to have sex, I was sure the book was going to spontaneously combust in my hands.

I will mention it here, and I’ve said it in other reviews of the Psy/Changeling series: if you have not read the previous books in the series, you may be lost. The books are all interconnected, the characters reappear…and they don’t simply make Brandoesque cameos. Lucas and Sascha, the H/H of  Slave to Sensation, have a major role in the book, as do Clay, Tally, Faith and Vaughn along with appearances from Dorian and yes, Kaleb Krycheck (who happens to be at the absolute top of my to do list amongst the Psy/Changeling cast). The books seem to be following a similar arc as many of the characters do, but on a much larger scale: what started out as background is becoming more interwoven into the stories,more important to the plot of each book, and each character that is introduced is playing a role. All of these elements came together with amazing synchronicity in  Bonds of Justice. A.

This is a trade paperback published by Berkley and subject to Agency pricing. (I bought Bonds of Justice at $5.49 at Kobo Books. Not sure how/why they are discounting but yay?)