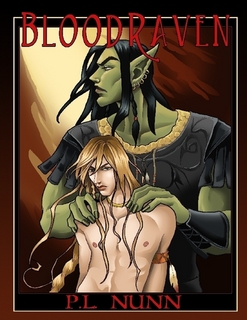 A son of a forest dwelling people, Yhalen knows little of the world outside the ancestral forest, until he is captured by a band of ogres on a slave-taking mission. Only grim tales of the barbaric giants had reached the forest, but Yhalen soon learns that even the darkest fireside story only hinted at the brutality of these Northern warriors. He discovers the meaning of true fear at their hands, and only the awakening of ancient magic saves him from destruction. Surviving ogre viciousness, he finds himself given to Bloodraven, the half ogre, half human war leader as a slave. Yhalen, refusing to bend, soon pays the price for offending prickly ogre pride. But Bloodraven is no mindless, violent ogrish beast. Bloodraven has an agenda and Yhalen finds himself drawn in the wake into human and ogre politics, into bloodshed and cruelty and into the forbidden magic that is damnation in the eyes of his own people, but which might mean the difference between death and salvation.

First and foremost PLEASE HEED THE WARNINGS IF YOU CANNOT READ ABOUT SEXUAL AND PHYSICAL VIOLENCE. I cannot stress it strongly enough, this book is not just violent, it is *brutal*. If I could I would put it in the red font, it is probably the most violent book I have ever read in m/m genre.

I first read your book four or five years ago on the persistent recommendation of a friend, who insisted that even if the book would be too violent for my tastes, I would love the great characters, the love story, and the world-building. What can I say? She was right on both counts – the book was so violent that I have never had an urge to reread it (not only that, there were parts, especially a few chapters in the beginning of the book, which I had to skim, and some of it I skipped completely when I was rereading). The book was also so memorable, the characters so well drawn, that I never forgot it and kept recommending it left and right if I thought that my book buddies could handle the violence. When I decided to introduce the story to DA’s readers I knew that I had to brace myself for the reread and mostly I managed to do it.

When I think about it, I think one of the main reasons this book stood the test of time with flying colors for me is because for me it managed to be both: dark erotic fantasy and romance. While I had probably never read an m/m book as violent as this one, I have surely read some violent books which also tried to be romances, but for me all those books failed miserably at the romance parts. You see, usually when I have read an entire book about two people who keep doing horrible things to each other, hate each other, one of them raping the other, or just physically assaulting him, I cannot buy that this is the story of a couple overcoming those obstacles to build a relationship together. I just cannot buy it. And when the couple who has done terrible things to each other throughout the book suddenly gets their happy ending with none of their issues being resolved to my satisfaction – well, a flying workout for my Kindle is what I start thinking about. But I thought that “Bloodraven” succeeded spectacularly where so many books have failed for me. Here is what I think the author did right in order to convince me as a reader that this book is also a romance.

As the blurb tells you, Yhalen starts the story as a naïve,sheltered young man, who is caught by Ogres and who encounters terrible horrors at their hands. He then becomes a slave to Bloodraven and Bloodraven from the beginning does not treat him kindly either (that would be an understatement). But the characters grow and change throughout the whole book and readers can see it. They grow and change as individuals and they grow and change in the ways they see each other.

I am trying to decide whose character arc impressed me more, Bloodraven or Yhalen, and I really cannot decide. I mean, I did not really care for Bloodraven as “individual” for the first quarter of the story. “Disgusting, violent brute” summarizes pretty well what I thought about him. He never really stopped being violent, but I started to discover other things about him. Here we have somebody whose upbringing was a constant battle for survival and he still wants to help the other half-blood Ogres like him to have better life than they have. We see that Bloodraven may not talk much, but he can do political intrigue like nobody’s business. And we see that his attitude about Yhalen changes as well – oh possessiveness never really goes away, but shockingly I saw respect and I could even believe in his love.

“No,” Blloodraven agreed and looked away. “ I regret…my loss of…temper.”
Yhalen had no earthy idea of how to deal with that concession. He felt a vague little tingle of elation that it had been offered at all. He waited, but Bloodraven said no more, apparently having dried up his reserve of conversation. Yhalen settled back down in the bedding, curling within meager warmth. Bloodraven did not join him there, and soon enough sleep did creep up and take him”.

I have read stories with the “master-slave” trope and will continue reading them, but usually I prefer stories with a reluctant master and the slave being freed at the end, either because the society changes or because both of them are somehow transported to another, more tolerant society. I am usually not keen on very violent masters in my romances (obviously I do not expect anything but violent masters in non – romance books), but here the author somehow managed, if not to make me to love the violence, at least to get me to tolerate it and believe in the love story. I thought she did several clever things to achieve it. Even though Bloodraven certainly treats Yhalen badly in the beginning of the story, his worst trauma is caused by somebody else, and the more the story progresses, the less violent he becomes. In fact, the only times he unleashes violence on Yhalen later in the story is when there seems to be no other choice for them.

Another clever thing that the narrative did was to show me that eventually no matter how much brutal physical strength Bloodraven has, Yhalen also has some very scary skills at his disposal and if need be, he can easily do a lot of damage to Bloodraven, even kill him. In other words, the balance of power shifts over the course of the story and the two men truly become equals, even if one likes to submit to the other in bed.

“Little fool! Little fool who was the cause of this futile frustration, who belonged to him and refused to acknowledge it. Who insulted him with word and deed and threatened the very nature of his manhood by creating fear and doubt. Even his own dog, a snarling beast that even full-blooded ogre warriors were wary of, more often than not padded at Yhalen’s side more than his own, gentle as any cowering camp fur.”

There is nothing sudden about the way Yhalen slowly but surely learns the hidden and not so hidden truths about himself, about what he wants to do and what he can do. There is nothing sudden about Bloodraven slowly but surely realizing how much he cares for Yhalen. We do not just suddenly see at the end that everything is forgiven and now they have a happy future in front of them. Rather, we see them falling in love right in front of us.

Moreover, I thought the world-building was superb. Familiar magical creatures like Ogres and mountain trolls did not feel derivative to me at all – especially Ogres, because we get to know some of them. The magic is also creative as demonstrated by the excerpt from this battle scene.

“Then, with a great sound of creaking wood, the forest awoke. The ogre closest to him cried out in surprise as dozens of slithering branches reached down to wrap about his upper torso, piercing flesh as they wove their way around and into his body. They yanked him up off the ground and drew him into the snarl of limbs overhead. His comrades roared in shock, hacking away at wooden attackers as they were snared in the same fashion. And not just the branches from above, but from below, a well. Roots burst up out of the earth to encircle legs, torsos, and heads like great serpents, hauling bodies back into the earth and the tangle of old roots at the base of ancient trees as they retreated.”

I do not know if I will ever reread “Bloodraven” again, I am sure the story had some stylistic issues, but for the sheer power it holds over me for quite a few years, and because I flew throughout almost 10000 locations on my kindle, it gets an A.