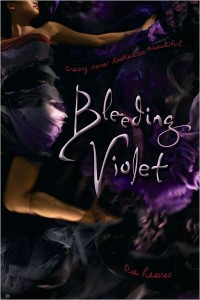 I was casually perusing the Book Smugglers' blog when I came across this midyear list of their favorite books of 2010 and saw that Ana had given your debut, Bleeding Violet a grade of perfect 10.

Since the book's genre (YA with a paranormal flavor) is one I enjoy, I looked up Ana's review of Bleeding Violet. The book sounded unusual and well-written, and perfect 10's are a rare event on the Book Smugglers' blog, so I thought I'd give it a try. I downloaded Bleeding Violet from the Sony store to my ebook reader, began to read, and found myself engaged almost immediately.

The truck driver let me off on Lamartine, on the odd side of the street. I felt odd too, standing in the town where my mother lived. For the first seven years of my life, we hadn't even lived on the same continent, and now she waited only a few houses away.

Sixteen year old Hanna Jarvinen arrives in Portero, Texas to reunite with her mother, who isn't expecting her. The town of Portero isn't in any way normal, but then Hanna doesn't feel normal, either. She's not only biracial and bicultural (half African American and half Finn), but also bipolar.

As she approaches her mother's house, Hanna hallucinates her deceased father's voice coaching her on how to deal with her mother. Hanna's mother, Rosalee Price, left Hanna with her father in Finland shortly after Hanna's birth, and Hanna has no memories of Rosalee. But the voice of Hanna's father, Joosef, warns Hanna not to wake her sleeping mother by knocking on her door in the middle of the night.

So, after finding the spare key and letting herself into Rosalee's house, Hanna follows her father's advice to lure Rosalee out of her bedroom with the scent of a grilled cheese sandwich.

My grandma Annikki once told me that anyone who looked on the face of God would instantly fall over dead. Looking at my mother-‘for the first time ever-‘I wondered if it was because God was beautiful.

To Hanna, who did not resemble her Finnish relatives, Rosalee, who looks much like her, is beyond beautiful. Hanna wants nothing more than her mother's approval and love.

But Rosalee is not pleased to find her daughter in her kitchen instead of in Finland. As she learns that Hanna and her father came to the United States nine years earlier, and that in the last year, Hanna's father passed away, Rosalee notices the bloodstains on Hanna's clothes.

It turns out that Hanna struck her aunt Ulla, with whom she had been living, on her head with a rolling pin during an argument over whether Hanna should be committed to a mental health facility. And that discovery is how Rosalee learns that her teenaged daughter hears voices and is prone to violence.

While Rosalee tries to ascertain just how badly Ulla was injured, Hanna settles into the attic and unpacks her wardrobe of violet dresses. Hanna sews her own clothes, and she is going through a purple phase.

Rosalee does not want Hanna to move in, but Hanna digs in her heels and refuses to leave. And so, Hanna and Rosalee strike a bargain: if Hanna can fit in at Portero's high school and in the town within two weeks, she can remain in Rosalee's house. If not, she will leave.

Hanna is elated and determined to make friends and stay, but there's only one problem: she has never fit in anywhere.

Still, Portero is not anywhere. When Hanna goes to the school, she discovers that it is a very strange place, one where glass statues shaped like students get more attention than newcomers, where nearly everyone wears black clothes and uses earplugs for some mysterious reason, and where Hanna's geometry textbook turns into "A Teen's Guide to Living with Bipolar Disorder" with multiple choice questions like this one:

At first Hanna thinks she's hallucinating, but then she begins to suspect that that's not exactly the case. The other students refer to Hanna as a "transy," and after school, Hanna asks her mother what the word means.

"A transient." She grabbed an apple for herself and leaned against the picture window, since she couldn't sit with me at the table. "Anything transient. Like a mayfly."

I knew about mayflies, had seen them in action during the slow summers at our lake house in Finland. Huge swarms of them rising like dark mist from the lakes, mating in the air in winged orgiastic abandon, only to flutter back down into the water, drained. Dead. An entire lifetime played out in the space of a few hours.

But what the hell was mayflylike about me?

Since the students treat Hanna with indifference, she decides the quickest way to gain acceptance is to attach herself to a popular boy. The best candidate appears to be Wyatt Ortiga. Unlike everyone else, Wyatt dresses in green. Students seem to hang on his every word. And Hanna finds him attractive, if annoying at times.

As Hanna gets to know him better, she discovers that Wyatt is as far from normal as she is, and that he is still hung up on his ex-girlfriend, Petra. But that doesn't stop Hanna from pursuing him. And Petra, who doesn't seem to be entirely over Wyatt herself, does not discourage this.

Petra grabbed my shoulders, leaning on me again, but this time so she could whisper in my ear. "Do yourself a favor and find someone tough, someone like Wyatt, who'll look after you. You'll thank me." She let me go and rushed off to join Lecy.

Someone tough to look after me?

Petra seemed like a nice girl, not quite the bitch I'd been expecting, but even if I'd wanted to be her friend, her attitude would drive me insane. Did she think this was the fifies? I didn't need some guy to look after me. I could look after myself.

The more Hanna discovers about how dangerous Portero can be, the more determined she is to face its threats head-on. And that means becoming more and more involved with Wyatt, who knows more about those dangers than any other kid in Portero.

Hanna's goal is to win the right to stay with her mother, and more than that, to win Rosalee's love. But with threats abounding from sources both supernatural and natural, what will she discover about Portero, about Wyatt, about Rosalee, and about herself in the process?

Bleeding Violet is one of the freshest and most original books I have read this year. I don't want to reveal too much of what is going on in the story, but the world-building is startling and surreal, and some scenes have a dreamlike, hallucinatory quality.

But as great as the world-building was, what I liked even more was the writing and the characterization. The dialogue was exceptional – snappy, surprising and real, while the narration was full of the contradictions that make Hanna such an interesting character.

Yes, the girl may be prickly, even pugnacious, and she's not above using her boyfriend, but her need for love and her determination to attain respect and acceptance made her indelibly appealing to me.

Hanna's relationship with Wyatt stands out from many of the teen romances I've come across because the two jump into bed pretty quickly. One of the things that impressed me was how much I liked Wyatt despite his difficulty in getting over Petra even after he was sleeping with Hanna. There was decency and goodness in Wyatt that Hanna sensed from the first but which he could not see in himself.

Rosalee was also a memorable character – seemingly cold in her constant rejection of her daughter, but more complex than she appears at first. And many of the side characters stand out too, from Wyatt's fierce mother to the insecure Petra to the objects that should have been inanimate but came to life and acquired a personality.

I have very few criticisms of this book. Although the portrayal of Hanna's illness did not seem realistic to me at first, I quickly realized that that was because of the book's surreal quality. I do feel that at one point, during the ramp up to the book's climax, the supernatural goings on overwhelmed the human conflicts a bit, but that problem quickly righted itself.

Besides that, I have just one gripe, and that is that not about the book itself, but about the typesetting for the electronic edition I read. As mentioned before, I purchased the book from the Sony store, and my copy was peppered with question marks in places where I think there should have been dashes.

But those minor caveats aside, I enjoyed Bleeding Violet enormously. Original, quirky, suspenseful, occasionally funny, romantic, and dramatic – it was all these things and more. A for this one.