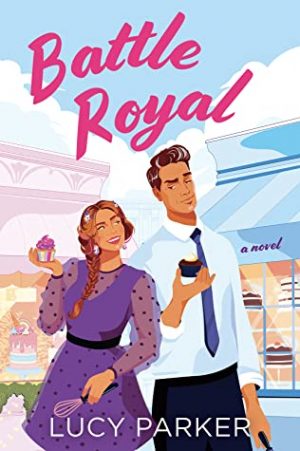 If ever a book was made to please me, Battle Royal is it. It even has cake! I have a soft spot for the grumpy one and the sunshiney one and when he’s also a cinnamon roll? Sign me up. Generally speaking I’m hesitant with books billed as “enemies to lovers”; I dislike mean characters and I need to like the main characters in any romance I’m reading or else I can’t care about their journey to a HEA. Sylvie “detests” Dominic and she certainly thinks some less-than-flattering thoughts about him, but they are never truly mean to one another. That makes all the difference to me as a reader.

Sylvie Fairchild met Dominic De Vere four years earlier, when she was  a contestant on a baking show which I envision as a more commercial and ruthless Great British Bake Off (in the US for copyright reasons it’s known as The Great British Baking Show). The format described in the book is not the same as GBBO but I admit from time to time, I had trouble not picturing Dominic as Paul Hollywood. (He’s not Paul Hollywood though. For one, he’s got dark hair, lightly threaded with silver and he is far more into cake and chocolates rather than bread. Still there is a scene involving a handshake so there’s more than one nod to him in the book.)

Dominic is the stern judge on “Operation Cake”; known for his ruthless honesty and harsh (but accurate) critiques. He’s also a fan of classic styles and colour schemes. Sylvie never saw a cake or cookie that couldn’t be improved by some colour and glitter.

Sylvie’s exit, shortly before the final in her season of the show, was precipitated by a catastrophe, entirely caught on film of course, involving a sponge cake unicorn hoof being accidentally shot straight into Dominic’s forehead.  Much to his continued dismay, it has over a million views on YouTube.

Now, four years later, Sylvie has her own bakery – Sugar Fair – a magical sensory explosion of colour and sparkle, filled with a spun sugar castle and chocolate fountain and everything a child and cake-loving adult could ever want. (She even has a basement area called the Dark Forest where she runs “potions” classes for adults, involving alcohol and sugar syrup bubbles and cocktail theatre.) As it happens, Sugar Fair is in Notting Hill, right across the road from De Vere’s, which Dominic inherited from his beloved grandfather, Sebastian. De Vere’s is establishment, classic, staid and meticulous – ie, the opposite of Sugar Fair.

Sylvie had seen dozens of his own, incredibly expensive cakes in his London bakery. His preferred color palette covered a diverse range from white to ivory. Sometimes he really pushed the boat out and ventured into the realms of cream. Once at a black-tie event, she’d spotted a De Vere cake on the banquet table that actually had gold accents, and assumed he was either extremely unwell or suffering an early-onset midlife crisis.

He went in for elegant minimalism.

She rarely saw an object that couldn’t be improved with sequins.

She was, aesthetically, his worst nightmare.

And this year, Sylvie has been invited to be a judge on Operation Cake, the previous third judge having left unexpectedly after the prior season.

Added to that, Princess Rose, granddaughter of the King of England has just announced her engagement to Johnny Marchmont and an epic wedding cake will be required. In the tight London bakery market, the royal contract will go along way to keeping any business afloat; building reputation and bringing in more custom. De Vere’s was invited to tender; Sylvie put in a proposal anyway. She’s bold and confident and backs herself and that is just one of the reasons I loved her.

Over the course of the book, the season of Operation Cake is filmed and Dominic and Sylvie compete against each other for the chance to make the royal wedding cake. Along the way they find themselves collaborating more than clashing, learning about and appreciating each other in news ways, and of course, they fall in love.

Sylvie perceived Dominic as lacking in heart and personality, thinking him cold and unfeeling but nothing could be further from the truth. Dominic has difficulty sharing intimate emotions and being physically demonstrative and he has reasons, stemming from childhood neglect and emotional abuse.  But astute romance readers can tell very early on that Dominic is kind and caring – there are multiple clues, both overt and subtle.

Far from unwinding in front of the TV, she’d be surprised if he ever went home at all. He started work as early as she did, and he was frequently still across the road when she tottered tiredly out the door after a Dark Forest session. In fact, he often stood outside the door of De Vere’s, practically ticking with annoyance and impatience, and waited until she’d safely made it to her car.

I mean, we all know what that means, right?

He’s not only kind to Sylvie though. We see more than glimpses of the way he treats his staff, his patience and care for those who work for him and their unwavering loyalty and commitment to him in return.

Sylvie’s parents died in when she was a very young child and she was raised by her paternal Aunt Mallory. Sylvie grew up with her best friend in the world Jay Fforde – they were born only 12 hours apart and in the same maternity ward. They have literally been friends their whole lives. Sugar Fair is a joint partnership between Jay and Sylvie – he looks after most of the business side of things but also can run the potions classes when necessary and Sylvie handles the creative side. Mallory, a talented artist specialising in glasswork in particular, died of cancer when Sylvie was only 19. Apart from Jay, she has been alone ever since.

Dominic has two sisters, but is largely estranged from them. His younger sister, Petunia “Pet”, 12 years his junior, has recently installed herself as his temporary assistant at De Vere’s and trying to build a relationship with him. Dominic wants it, very much, but he’s stiff and formal with her, not knowing how to breach the divide between them caused by their years apart.

We also meet Rose and Johnny and see their love come under fire from the tabloids and incessant pressure of royal life. With everything about Prince Harry and Meghan in the media this year, it felt familiar and very sad.

In creating their wedding cake, Rose and Johnny challenge Dominic and Sylvie (separately) to incorporate some special items in their designs and this leads to research about Rose’s beloved uncle, Prince Patrick, who died a bachelor and with whom Rose shared a close bond.  Dominic and Sylvie discover a great love in Patrick’s past and it adds bittersweet piquancy to the book. In some ways there are three, perhaps even four romantic storylines in this book, albeit not all of them have a HEA. (The inclusion of Patrick’s romance reminded me a little of those wonderful WWII storylines in the early Troubleshooters books by Suzanne Brockmann.)

There is a delightful humour to the book, from the chapter headers which range from the whimsical to darkly funny and generally set the scene for the action –

Where somebody has made the executive decision to hold a meeting about baked goods and not serve snacks.

to Dominic’s dry wit and Sylvie’s sharp observations. But there are serious moments too, like when Sylvie remembers those moments before Mallory passed away and how she said goodbye – even reading those bits now when writing this review still brings tears to my eyes. The depiction of loss and grief clearly comes from a place of familiarity and experience. It is not trite or manipulative. It is raw and real while also providing an opportunity for Sylvie to see Dominic as the man he is, kind and caring, albeit hidden behind an uptight, gruff exterior.

Cool, firm lips were pressed against her temple. Closing her eyes for a moment now, as she had then, Sylvie breathed deeply before she turned her head and looked up at Dominic. He was holding her, his arms wrapped around her without hesitation, his body sharing its warmth.

For once, the expression in his dark eyes was transmitting clear as day. Deep concern, but primarily empathy. The bone-deep understanding of someone who had walked a similar path.

And when Dominic shares his childhood story with Sylvie, it not only gives us a glimpse into the who and why of him, it shows the reader Sylvie’s fierce protective streak and her compassion.

Dominic De Vere is one of my favourite kind of heroes, kind and honest but who needs someone to see beneath his surface, rewarding the person who does with undying loyalty and devotion.

I loved Sylvie too but I am a hero-centric reader and it was Dominic’s vulnerability and his bravery and determination not to let his past ruin his future that spoke to me particularly. I fell more than a little in love with him. He’s the kind of guy who will never let someone down. That kind of stalwart constancy is my catnip. Seriously, it’s sexiness cannot be overrated IMO.

There is a broad, diverse cast and each member felt like a whole person, no matter that they may have had only a small part to play in the story or have had a brief appearance. I liked the way Sylvie and Dominic both were with their respective staffs, their professionalism and skill and I loved the way they were with each other. I loved the way they negotiated their relationship and their professional rivalry – with a thread of kindness running through their interactions but remaining true to their own identities and career aspirations.

I have enjoyed all of your books so far but I think this one may be your best one yet.

Battle Royal had everything I want in a romance. It made me laugh, cry and swoon at turns and I ended the story with a very contented, very happy book sigh.

→ Kaetrin
Previous article: REVIEW: The Next Pharaoh by Sally Watson
Next Post: Review : In the Best Families (Nero Wolfe, #17) by Rex Stout