REVIEW: Anna and the French Kiss by Stephanie Perkins

This was a book I just knew I would like.    I often talk about the unexplainable pull I have to certain things.   Movies, television shows, books.   There are certain ones that just tug at the very fiber of my being and say, “You’ll love me!”   Ms. Perkins, your book was not being a liar when it sent out this call to me.   Far from it. 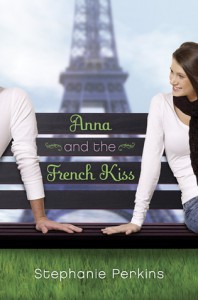 There’s a lot of pressure placed on a father/daughter relationship when the father in question writes sappy love novels in the vein of Nicholas Sparks.   Anna and her father have never had a great relationship, but they’ve always loved each other.   The lack of a father/daughter connection only widens with her teenage years and with the fame of Anna’s father as a bestselling author.   To remedy that, and to help Anna get some culture, he sends her over to a boarding school in France known as the School of America in Paris (SOAP).

Paris, France.   The City of Lights and Love.   The City of Anna-Is-Screwed-Because-She-Can-Barely-Speak-Spanish-Let-Alone-French.   She’ll also be leaving behind a guy who has finally shown interest in her, her best friend, and will be separated from the influence of the American cinema that she loves so much.   Anna is not that happy.   Yet there is a hint of excitement as she gets ready to board the plane.   Anything can happen in Paris.

When she disembarks, Anna finds herself homesick and alone.   A girl on her floor named helps her get used to things with some chocolat chaut (hot chocolate).   Anna finds herself among Meredith’s group of friends, including Josh, his girlfriend Rashmi, and Etienne St. Clair.

St. Clair, as everyone calls him, is unbelievable.   3 inches shorter than Anna, he has that thing about him that just makes guys attractive.   He manages to have a British accent while speaking flowing French and knowing a lot about America as well.   He’s kind and hilarious and has great hair.   It’s like someone took everything that could be perfect concerning the male species and put it into St. Clair.

Anna still feels tied down to her guy back home.   Even if she doesn’t really like him that much.   St. Clair apparently has a much older girlfriend.   Despite how he glosses over that part, it sounds to Anna like their relationship isn’t as awesome as its supposed to be.   They become friends at least, and St. Clair shows Anna some of the best things about Paris, including the many independent cinemas within a few blocks from Soap.

Anna and the French Kiss is a debut novel that encompasses everything that could be asked for in a contemporary romance.   It has the spark between two people, a slow and rich relationship build, great side characters, hilarious dialogue and writing, and a subtext of important and deep issues.

What starts the book off with a bang is the protagonist.   Anna is an every-girl with a heart for cinema and a lack of knowledge in French.   She’s not a farcical personality, and her character doesn’t rely on obvious traits to come across as unique.   Her voice in the writing is so humorous and delightful that she comes off as just simply a good character.   She’s not majorly spunky or shy or mean or kind.   Anna is simply Anna.   To have a character be so defined in a book makes for a great reading experience.

St. Clair is just as enjoyable and complex a hero.   Short, sexy, and intelligent men are hard to come by in YA and romance, but for St. Clair, it works.   He’s written with an air of wit and eloquence about him, yet he’s still so much a teenager and has his own set of problems like Anna.   The way he would interact with her and try to be moral despite his feelings for Anna growing made for excellent tension and showed how his character was legitimate.   The reader will particularly find his need for a sensitive friendship to be a big turn-on.

That is where the novel goes really right.   Most teen romance novels focus on the Love-Now-Questions-Later mentality.   Anna and St. Clair blatantly have crushes on each other, but they start off as friends.   There are countless scenes where this relationship slowly builds and expands over time, but it never feels rushed.   At the end, the reader will almost sigh in relief because the romantic tension between the two is resolved in some way.   This was such a big plus because the reader finally feels like they are reading a novel where there is romantic payoff and the characters actually had to build a relationship for that payoff.   Their fun quips and scenes make the reader warm inside, like this early one.

“It’s right here.”   He hands me a yellow padded envelope from his desk, and my stomach dances like it’s my birthday.   I rip the package open.   A small patch falls to the floor.   It’s the Canadian flag.

He tosses his hat onto his bed and rubs his hair.   It flies up in all different directions.   “It’s for your backpack, so people won’t think you’re American.   Europeans are much more forgiving of Canadians.

“I had to order it online, that’s why it took so long.   Didn’t know where I could find one in Paris, sorry.”   He fishes through a desk drawer and pulls out a safety pin.   He takes the tiny maple leaf flag from my hands and carefully pins it to the pocket of my backpack.   “There.   you’re officially Canadian.   Try not to abuse your new power.”

“Whatever.   I’m totally going out tonight.”

What you don’t refrain from showing is the darker side of your characters.   Most light romances don’t read too into their character’s darker ends.   At least in the young-adult world.   Here, Anna has her own severed father/daughter relationship, the wavering relationship with her best friend back in America, and dealing with liking a guy a tiny bit, and then liking St. Clair a lot more than a tiny bit.   St. Clair has father issues that could rival the most dysfunctional family on the planet, and has a lot of stress as well in relation to something that happens to his mother.   Amid the snappy one-liners and observations of Anna, there are so many moments of subtle clarity between the two characters.   They learn to deal with each other at the times when they are bitter and depressed, and they learn how to be better people.

This growth actually extends deeper into the romance.   During the final scenes (which will bear no mention in this review, as spoilers for this book would be wretched), the reader sees just how far both of the characters have come.   St. Clair isn’t so bitter.   Anna is a little more careful and adventurous.   They both yelled and snapped at each other and made mistakes, yet became better people.   It shows such a great theme of how people change with each other, especially in relationships like these.   It also provides a nice gender balance, because the guy and girl are equally at fault when the relationship has failings.

Dealings with the romance aside, the book has a lot going for it in the writing department as well.   You write like a dream.   Teenage like in humor and style, yet still very adult.   References from old films to iconic French tourist attractions abound.   Some will be gotten by everyone, and others will be looked up due to the reader’s shear fascination with the text.

Anna’s voice in this is just so strong that the reader is engrossed to the point where every emotional event directly affects them.   I will admit to blatantly laughing/crying/feeling frustrated and defeated along with Anna 100% of the way.   Your sense of theme in and out of the romance is also strong.   You take the idea of her father being a Nicholas Sparks-esqe writer and turn that into a major thematic concept and string it expertly throughout the book.   Friendship.   Relationships.   It all gets weaved expertly together in a mass of book that reads quickly and smoothly.

I cannot explain just how…enraptured I was by this book.   I really can’t.   I can go on and explain every little detail I picked up, but it’s so hard.   Influences from so many artistic sources are present, and the characters are all nicely rounded and formed.   It’s like the textbook definition of an awesome book.   Your mixture of the romantic comedy and the romantic drama into such a fun journey between two meant-for-each-other characters in this is flawless.   This is one of those books that I wish I could have written simply because I admire it so much.    Now where’s the damn companion book? A

→ John
Previous article: My First Sale by Grace Burrowes, Author of The Heir
Next Post: Jennie’s Best of 2010 List