REVIEW: Almost like being in love by Steve Kluger 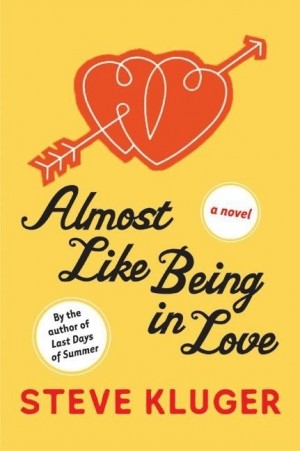 A high school jock and nerd fall in love senior year, only to part after an amazing summer of discovery to attend their respective colleges. They keep in touch at first, but then slowly drift apart.
Flash forward twenty years.

Travis and Craig both have great lives, careers, and loves. But something is missing …. Travis is the first to figure it out. He’s still in love with Craig, and come what may, he’s going after the boy who captured his heart, even if it means forsaking his job, making a fool of himself, and entering the great unknown. Told in narrative, letters, checklists, and more, this is the must-read novel for anyone who’s wondered what ever happened to that first great love.

I first read this book three or four years ago and ever since it has remained on my top ten lists of favorite m/m/gay romances. Not all books manage to stay on my favorites list because new and better ones come along, but your book is still there.

The blurb states it but I want to say it again – the story is not told in a regular narrative style. I am not sure if it can be called an epistolary novel, because it does not only consist of letters. It has clips from imaginary newspaper articles, diary entries, memos that characters would write to their employees and letters to friends. This is how the story is told, and if such a style does not work for you, you will not like this book. Otherwise I highly recommend buying this one the moment you finish reading this review.

The first chapter introduces us to your seemingly standard characters from YA gay romance – jock and nerd. Despite the way story is written, I thought the book managed to convey both guys’ thoughts extremely well and from the very beginning I was intrigued by both of them. They become friends who want to know more about each other and learn more and more about each other, until they realize that they are in love with each other. They get to their first kiss as Craig describes it to us:

“I kissed him, I fucking kissed him. First our noses touched and then I kissed him.
I shouldn’t have smoked the joint. I knew that was a mistake! But what else can you do when you’re playing catch and it starts to pour? If there hadn’t been one of those metal arch things with the benches underneath, it never would have happened – we’d have jogged back to school, wet and unkissed. This was a conspiracy!”

We learn that the guys had an amazing summer together after they graduated high school but eventually drifted apart because they went to different colleges.
However, instead of continuing the story chronologically, the second chapter flashes forward twenty years to 1998 and we are now introduced to Travis as a college professor. I hope this can give you a little glimpse of Travis as a history college professor.

“ BOOK PROPOSAL.
“Alexander Hamilton and the Designated Hitter”.
Issue: Once we’d won our independence from the Crown, how were we going to set up the House?
Objective: proving that the baseball and the United States Constitution were founded on the same set of rules, as outlined in the Federal papers by Alexander Hamilton”

The whole book proposal is a bit more detailed, so if you end up reading a book, you will get to read it in the longer form, but I think the topic alone gives a good glimpse at Travis’ personality.

After that chapter we meet Craig, who in the year 1998 is an attorney in a small private practice and who seems to have a passion for changing the world around him. Craig also seems to credit Travis for instilling in him the desire to change the world. Craig is also with Clayton, who I fell for probably faster than I fell for both Craig and Travis. Clayton is just such a nice guy, someone who suffered an abusive childhood and is scared now that people whom he loves will leave him. As an aside, I have read so many m/m romances where the heroes had abusive childhoods and I am yet to see many stories where the writer spends so few words describing it and invoking the sympathy for Clayton right away as opposed to writing many pages full of angsty storytelling.

“But nobody needed to be loved more than my boyfriend did. When the father he’d idolized had found out his kid liked men, he’d thrown him out of the house bodily. (“You make me sick,” he’d said, slamming the door on his only son.). Clayton never sufficiently recovered, especially after old man died. Instead, he inherited a legacy that became his trademark: If it looks like they’re going to dump you, beat them to it. It saves a lot of wear and tear on the heart. So I never allowed our skirmishes to get in the way for too long”

As much as the style allows, the chapters switch between Craig and Travis (and those characters who they communicate with, like Craig’s boyfriend Clayton, Travis’ friend Gordon, and so on).

We learn that Travis cannot find a boyfriend who will satisfy his “Boyfriend checklist” (a hilarious one, but it is really hard to quote stuff from this book because so much of it is not in a regular format and this checklist alone takes three pages in the book). He eventually realizes that he never forgot Craig and starts a crazy adventure of trying to find Craig and see if the love they shared can be rekindled twenty years later.

“Okay, maybe he doesn’t need a psychopathic history professor showing up from the Twilight Zone, and maybe he won’t even like me anymore. But he still has my heart – and if he is not using it, I want it back. Otherwise I’m going to go on loving him for the rest of my life. And there’s not a damned thing either of us can do about it.
Somehow I never got around telling him that.”

Travis eventually finds Craig, I do not think I will spoil anything by telling you this, but the little complication is that Craig, while not being able to forget Travis altogether is also genuinely in love with Clayton, who as I said before is a kind, generous soul. I will not tell you what happens, but there is a happy ending for everybody. I can tell you that amongst many other things that I think Steve Kluger did so well, this book completely spoiled me for the resolution of the love triangle. I hate love triangles in most stories, especially if everybody is good people, because I do not want to see anybody broken hearted. I sigh happily every time I reread the ending of this book.

I also think that this story mixed humor and serious things really well – as the reader learns about the lives Craig and Travis lived apart for twenty years we of course hear about the AIDS epidemic for example. How could we not hear about it, since it affected them and their friends so much? But I never felt that the writer used a heavier touch describing it than the rest of the book and for me it worked perfectly.

I have to admit, I think everything worked perfectly for me in this book. The characters I can never forget and want to imagine that they are living their lives helping people around them. The writing style, the humor, I liked it all.