Hi, my name is Jaclyn and I am a Fever-aholic.

This is a post about addiction. Yes, dear ones, I did read book four of the Fever series, DreamFever, by candlelight because the electricity went out the night I got my hands on a copy. I started reading this series in 2006, and had read the Highlander books before that, and after all this time I have high expectations of ShadowFever (which I will be reading on its publication date, Tuesday, January 18th). I want a spectacular ending. 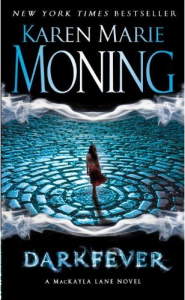 The Fever series books in order are: DarkFever. BloodFever. FaeFever. DreamFever. ShadowFever. This is a series for readers who like fantasy fiction; the fictionalized Irish mythology Ms. Moning has created continues to fascinate me eleven books later.

I’m sucked into the world of Mac (MacKayla Lane, sidhe-seer) and Barrons (Jericho Barrons, bookstore-owning man of power and mystery) and their quest for a powerful book. What book? It's called the Sinsar Dubh, an ageless Fae-created book that may hold the key to the Song of Making (which, I understand, is a song that allows the singer to create and give life). The book has developed sentience, turned evil, and every magical being in existence is seeking to control it, including Mac and Barrons.

Allow me to bring you up to speed on the story.

MacKayla Lane, a blond, beautiful Southern Belle from Georgia, learns that her beloved sister has been murdered while living in Dublin; Mac has a mysterious and horrifying voicemail from her sister that clues her in that someone was threatening her and, dissatisfied with the progress of the police investigation and wracked by guilt, Mac decides to go to Dublin-‘she's grieving and wants to know anything and everything she can about what happened to her sister. Mac stumbles upon the bookstore owned by Barrons and is drawn into the intrigue and horror of the evil stealthily taking over Dublin.

Our lovely blond babe goes pseudo-Goth, learns to fight, learns she's a sidhe-seer (can see the Fae, unlike most humans) with the ability to sense magical objects, and that she's tougher than she ever imagined. The borderline-TSTL Mac of page one in DarkFever sheds her cluelessness with each fingernail that she breaks, as she battles her way towards learning what happened to her sister and seeks revenge on her killer, and tries to find and contain the Sinsar Dubh.

Mac is a trip, and I am so gunning for her to beat the bad guys. I love the hard-edged Mac, the woman honed by horror and death.   I mourn her loss of innocence, but only a little.

The walls between the Fae and the human realms are failing and evil is moving into our world. Not all of the Fae are evil, per se, but they are not human and their realm does not belong in our world. Humans and Fae have not proved able to co-exist peacefully in the same place-well, ever.

What makes this series particularly appealing is that the lines between the good guys and the bad guys are not well-defined. There are people who are seeking to rid our world of the Fae-‘we'd call these the good guys, but they aren't fully good-‘every character in the book exists on at different points on the continuum of good and evil and no one is fully good, though some characters are pretty much fully evil. Even Mac, our intrepid heroine, does some really horrible stuff. It is the complexity of the characters that has kept me reading after all this time.

I have some frustrations, too, the biggest of which is that every book ends on a cliff-hanger. The cliff-hangers ratchet up from, "Mac has a mystery to solve' in the next book, to "someone just died (I think) and I don't know who.' I hate cliff-hangers. They make me frustrated and sometimes I throw the book across the room and refuse to read the next one out of spite. In this case, I'm reading ShadowFever as soon as I can get a copy; I've invested a lot of years in this series. However, the cliff-hanger in FaeFever pissed me off, and in DreamFever I was horrified and then immediately resigned to waiting a year to learn what just happened. This is not a literary device that I like, and interestingly, I've never discussed this series with anyone. (Until now.)

The Fever series is best if readers have already read the Highlander books, but it's not necessary. The world-building, myths, and knowledge about the Fae, the Unseelie, and the Druids are all richly layered book after book. Characters and events from those books are referenced and make cameos throughout the Fever series. I suspect that many of the characters will play a role in how ShadowFever resolves. It's a big investment of a reader's time.

Here's what I want to know:

1. What is Barrons? He's more than a garden-variety human. Barrons is feared and/or respected by the Fae and the Unseelie. Some readers have speculated that Barron's is the King of the Unseelie Court. (I don't believe this.) I've seen a tweet where someone posited that he's the son of the Unseelie King. (Interesting thought. I don't believe this, either.) I have no theory of what he is, just a bunch of thoughts on what he is not. After almost five years I'm tired of the endless speculation with no answers. Just tell me already.

2. Does Barrons love Mac, or does he simply need Mac? I want him to love her; I'm a romance reader, after all. I know he needs her. Does Mac love Barrons? Dunno. Sometimes she hates him; she doesn't trust him, though she trusts that he'll keep her alive because he needs her. I really want an HEA for each of them, preferably together. I'm not sure if that they are going to get one.

3. Is Adam Black going to make an appearance in ShadowFever and will Queen Aoibheal turn him back into Fae? In the book, Spell of the Highlander, she hinted that she'll need all of the MacKeltars, maybe Adam, plus one more (Barron's?) to overcome evil.

4. What was Christopher MacKeltar becoming? Whatever he's transforming into is freaky. (This happens in book four. I'm not spoiling anything for those of you who haven't read the books by asking this question.)

5. And last, but definitely not least: does Mac die? When it is all said and done, can she continue to live in the human realm? She's not a garden-variety human anymore, either.

Now you know what I want to know. On January 18th I'll be reading ShadowFever in the hopes that my questions are answered.

p.s. It's the custom here at Dear Author to grade the books we read. How does one grade one's own addiction? No idea. I'd give the first four books as a whole a B because let's face it, they've caught me, but I'm too frustrated by the cliff-hangers to give it an A, and the books aren't even in their execution, in my opinion; if I graded them individually I'd do it like this: DarkFever

→ Jaclyn
Previous article: Why do ebooks cost so much?
Next Post: REVIEW: Call Me Irresistible by Susan Elizabeth Phillips