REVIEW: A World without Princes (The School for Good and Evil Series #2) by Soman Chainani 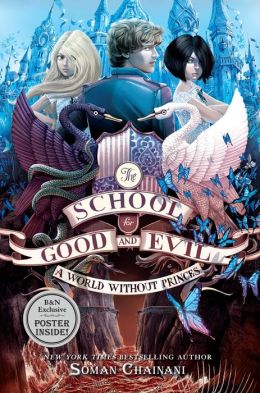 Thank you for sending this book to us. It arrived right around the time I finished reading The School for Good and Evil for my bookclub. I was really excited to discover that there was a sequel. My mom asked if I would review it for her blog and I agreed.

Agatha and Sophie are finally home and safe—well not exactly. In the first book, the two girls battle the idea of what it means to be good and what it means to be evil. In the end, they realize that there are some of both in every person. When they return to their homes in their village, Sophie—a former student of the School of Evil is trying her best to be good. Agatha—a former student of the School of Good is hoping that Sophie remains good not evil.

But the Red Coats don’t want to allow them to have the happy ending they earned in the first book. They are magically transported back to the school grounds only to find out that the Schools of Good and Evil have changed into the School of Girls and Boys.

Agatha and Sophie are trying to capture the Storian, a magical pen, to rewrite the ending of their story. But the Boys are the only people that stand in their way.

Agatha was once a girl that nobody ever cared about. Everyone also said that Agatha was a witch and parents told their kids to stay away from her until Sophie came around. Sophie first did it because she viewed Agatha as her “good” deed but eventually their connection turned into a real friendship.

When Agatha and Sophie are back at school they are facing a lot of challenges like the trial where boys and girls compete to win for their school by making the other school participants fail. They are also facing forces that are trying to tear them apart and people trying to tell Agatha that she is better with a prince rather than a friend like Sophie.

Sophie undergoes some surprising changes–like literal changes–in order to capture the Storian. In the first book Sophie pretended to be friends with Agatha because she thought that is what a “good” person would do. In this book, Sophie is afraid of losing Agatha’s friendship because of a prince who is interested in Agatha. The prince also believes Sophie is evil and tries to separate her from Agatha. Agatha struggles with her feelings for the prince as well as her desire to remain best friends with Sophie.

I did not like the fact that there had to be a prince in the story. But I really liked the storian and that Agatha had to choose between her prince and her best friend. I was really surprised of how the story turned out. Also Agatha’s crazy plan on how to get the Storian. There are a lot of people that I had no idea would come in to the story like people that were only mentioned little in the book one. I would give this book an A. I really hope that you love this book as much as I do.

Jane’s Note: These books are surprisingly about female friendship which I liked. Their message is very much like the movie Frozen and the first book has a very Frozen like ending (the book came out in advance of the movie so there’s no copying here). The books do tend to enforce gender norms and focus a little too much on looking good. I.e., you’re beautiful outside when you’re good inside and vice versa.

But as a book for my daughter, I loved the message of the importance of female friendship. The ten year old girls in our book club enjoyed the book quite a bit and are eager to read more.

→ Jane
Previous article: My Switching Story: How I made the move from IPhone to Android with few regrets
Next Post: Monday News: How people use their tablets, the trouble with Indiegogo, NPR’s tricks its readers, and amusing YA quiz