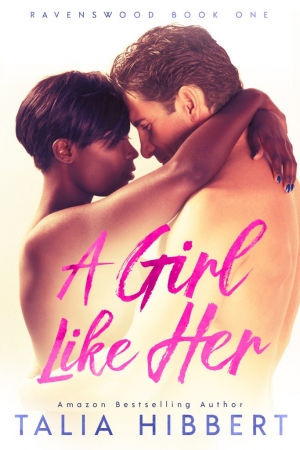 I can barely contain my squee I loved this book so much. I think I nearly wore out the highlight function on my ereader while reading and it was difficult to pick which quotes to put in this review. I wanted to use ALL of them.

TL;DR This book is excellent and readers who enjoy contemporary romance with a soft-hearted hero and a prickly, awesome heroine should definitely one-click, stat.

The only thing I didn’t really enjoy about the story was the prologue. It’s only a couple of pages (maybe 4) and set in 2016. It was told from the POV of the villain of the piece and as such had quite a different tone to the rest of the book. Also, it starts in the middle of something and is a little confusing but as the main story moved forward, all became clear.

Chapter one picks up two years later in early 2018. Ruth Kabbah is a young black woman living in Ravenswood, a small village somewhere in England. After the events of 2016, Ruth has become a virtual shut in. Her new neighbour is Evan Miller. He’s a former military man who is working as a blacksmith for Burne & Co.  Daniel Burne, the son of the owner is the bad guy. As it happens (Evan has excellent taste), Evan doesn’t like Daniel much at all. When he sees the way Daniel treats Ruth when they (literally) bump into her (actually she bumps into them) –

The most beautiful man on Earth frowned at her. “Are you alright? Did you hit your head?”

Ruth didn’t bother answering. Talking to this guy could not possibly be as worthwhile as simply looking at him

– his contempt for Daniel only increases.

Ruth is wonderful. She’s prickly and solitary and after being worked over by Daniel, has lost much of her confidence. She’s also funny, geeky, talented and brave. She is mistreated by most of the town thanks to Daniel’s influence but she is never pathetic. She is fierce and I loved her hard.

Ruth stared dully at a crumb on her plate and tried to unlock her latent mutant powers. She knew she had some. They should come out under moments of extreme stress. Surely, if she could teleport or, say, tear a man’s head from his body, that ability would make itself known now?

Evan likes Ruth on sight but he has to work very hard to get past her defenses. The romance is a delicious slow burn and the payoff is totally worth it.

Evan is kind. He’s a genuinely good guy. He occasionally tips into over-stepping territory because he cares so much and one of his lessons is to support Ruth in her journey without trying to do it for her (out of care and because he wants to protect her from hurt). Otherwise, he’s practically perfect. He’s well built (very tall and broad-chested with big muscles) but he doesn’t use his size to intimidate Ruth. He is a bit of a teddy bear really; his marshmallow centre isn’t remotely hidden. I didn’t find him at all cloying or weak. He is patient and caring; the kind of guy who does good deeds for people just because. He’s a bit of a unicorn that way actually. I don’t think I’ve ever met a romance hero quite like him. Unsurprisingly, Ruth is suspicious of him.

She turned, folded her arms, and pinned him with a hard look. “Are you a serial killer?”

“Has it only just occurred to you that I might be?”

The humour in the book is terrific and I laughed out loud often through the story.

“I am not in need of an oven. I had the oven removed.”

His brows lifted slightly. “I… see?”

He did not see. Which was usually just how Ruth liked things.

So why the hell did she feel the need to explain further?

“I had an accident about a year ago, and both my sister and the landlord got all pissy about the way I use ovens. Or something. So I thought, I never cook anyway—might as well stick with a microwave, a toaster, and a kettle.”

“What the hell do you make with a microwave, a toaster and a kettle?” He asked, sounding absolutely aghast.

Why did his obvious astonishment make her want to smile?

“Supernoodles, usually,” she said, just to watch his concern grow.

The writing is lovely with some descriptions which stuck with me long after I read them.

Sometimes, in the middle of the night, he heard the pipes on her side of the wall flare to life. The wall was so fucking thin. It was worse in his bedroom; he could hear the creak of her bed every time she lay down. They’d barely spoken, but Evan knew that she slept restlessly, that her bed must be poorly made, and that she showered at odd hours. It made him feel weirdly connected to her in a way neither of them had earned.

She smiled. It was an involuntary smile, an overflowing of the steady warmth that his presence sparked inside her chest.

Ruth’s autism and introversion is part of her character, like the colour of her hair or her ability to draw her web comic. She was easy to relate to, particularly here:

Without the sexual attraction – because (a) Ruth is fictional and (b) I don’t swing that way – I fell in love with Ruth for the same reasons Evan did.

Evan’s heart swelled, because he could tell that Ruth thought she was being extremely subtle. Her weighted tone and speaking looks actually had all the subtlety of a dying hippopotamus. She was, in a word, adorable.

I loved the way Ruth’s body confidence was portrayed.

Evan sank slowly to his knees beside the bed, his eyes traversing all the hills and valleys of her body—and then repeating the journey again, slower, as if to savour certain parts. She wondered if she should’ve done this lying down, to minimise the roll situation, but then decided that rolls were fine. If they were going to do anything interesting, rolls would eventually occur. She couldn’t lie down constantly whenever they were naked.

Plus, Evan didn’t seem to have any complaints.

Oh this book is SO. GOOD.

“If I were in a demonstrative mood I might say that you’re the sexiest man I’ve ever met.”

“I already knew that.”

She narrowed her eyes. “You thought you knew that.”