So where have you been all my reading life? Oh, hanging out in the sci/fantasy aisle? Well, get your pub to move you to the romance aisle. You get tons more traffic. And paranormal romance right now? Very very hot. 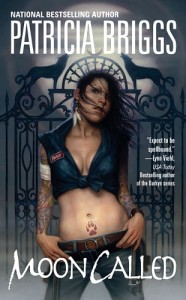 I bought your book based on the banging cover and the cool blurb. I am a sucker for the urban fantasy since the seminal work by Emma Bull, War of the Oaks (which all you romancelandia fans should definitely read).

Moon Called features Mercedes Thompson who is a walker, a natural born shapeshifting coyote. She has no magic to speak of. She is not super strong, merely fast. Her trade is a mechanic and she has a number of interesting friends. Her next door neighbor is the local Alpha. She fixes the vw bus of a vampire. Her mentor is a gremlin.

The plot revolves around the kidnap of Jesse (the Alpha neighbor’s daughter) and the severe maiming of Adam. Mercy thinks that there may have been a coup attempt and instead of calling his pack for help she takes Adam to the Marrock. The Marrock is the leader of all werewolves in North America. Mercy lived with the Marrock until she was 16 when she went to live with her mother. Mercy left because the Marrock’s son wanted to marry her but only, Mercy believed, because she could bear him children. Werewolf females cannot bear children. Mercy is a coyote, though, and could. Mercy loved Samuel too much to mate with him for that reason alone –” at least at the age of 16.

The mystery is fairly good and there were some good red herrings but the ending –” the reasoning behind what was done –” didn’t cut it for me. But because of the overall good of worldbuilding, I’ll overlook the weak suspense ending. I like that Mercy is no Anita Blake –” she needs help to save herself. She doesn’t gain more powers at the end. She is not in bed with either Samuel or Adam or both. While I do see a love triangle emerging which is my least favorite thing but I like both male leads enough that I wasn’t bothered by it greatly. Maybe because Mercy herself acts so reasonably about her feelings. I like a sensible heroine and I thought Mercy fit that bill. Thanks for writing this book and I can’t wait to see the next Mercy story. This is a A-. Not perfect but I will be re-reading it.

P.S. I also loved your Hurog series: Dragon Bones and Dragon Blood. So did my DH. He is currently cursing romance readers all over since he learned that your next four books will be Mercy books. I am sure you won’t mind that I put in a request for his sake for one more Hurog book.