Several readers recommended this book to me as the ultimate f/f/m ménage romance. They were all absolutely right. I bought it on Christmas Day (using my new kindle!) and I'm so glad I did. La Bonne was a delight from start to finish. 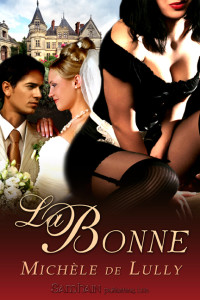 I'm not going to include the back-cover description because it's overcomplicated and confusing. If not for the strong word of mouth, that muddled blurb would have deterred me from buying. Dear Samhain-‘this story deserves better.

La Bonne (The Maid) is told in first person point of view from (you guessed it) the maid's perspective. This character remains nameless. The fact that I didn’t even notice is a testament to your storytelling skills. When I referred back to the text to look for a name, I got wrapped up in the fairytale romance again and enjoyed it even more the second time around. Oh, Mlle. de Lully. You are good.

Writing a review–or a blurb–is difficult when the  heroine has no name, but I will try to do her justice.   The maid is a plucky, plainspoken young woman. She's low-class, hard-edged, and down on her luck. No one has ever treated her with kindness or respect, so she doesn't value herself or feel entitled to anything. She knows her station in life and accepts it without flinching.

When the story opens, the maid has been arrested for prostitution. She’s left her loser boyfriend and is out walking the streets when a handsome older gentleman (really an undercover police officer) asks her for a paid date. She’s cuffed before she can turn her first trick. After three months at a halfway house, she's released on a probationary period to work as a servant at the illustrious Cheroigne House. Dame Cheroigne is involved in many charitable pursuits, including the rehabilitation of wayward girls. If the maid does an exemplary job, she won't go to jail.

During the maid's employment interview, the Dame's granddaughter comes sailing down the stairs in a designer gown. Amanda is a present-day princess, pure and unspoiled and achingly lovely. She needs help fastening her dress. The maid jumps to the task, dazzled by fine fabric and flawless skin. Amanda requests the maid as her personal assistant. She doesn't have any friends her own age and longs for a fun female confidant.

The Dame doesn't consider the maid a good influence, but she indulges Amanda for a very cunning reason.

The maid and the princess hit it off well. Amanda is an adventurous spirit, eager to break free from the restrictions of propriety. The maid, in turn, feels a wicked compulsion to coax some naughtiness out of her. When she advises the princess to go bare beneath her revealing ball gown, Amanda complies easily.

Without the underclothes, the dress clung to her like paint, making a surface so smooth and shiny I could barely resist running my hands over it. "This dress shouldn't be worn with underthings."

The stunningly beautiful woman in the mirror agreed. She didn't look like an innocent child anymore. I couldn't imagine any man not breaking his neck when she walked by. Yes, I was envious, but only a little. Mostly I was just in awe. Amanda was too sweet to envy, too pure for spite.

When I first saw His Highness, I forgot to breathe.

I was expecting some stuffed shirt, either a tweedy, arrogant young man or a fat, arrogant, old one. What I saw was a Mediterranean concoction that melted my knees, a honey-brown liqueur that I wanted to drink until I drowned in it. His stylish suit could not conceal the hardness of his body, lean and lithe and graceful at every turn. His black eyes saw everything, and when they swept over me I wilted, shamed by my desire.

Petros has been engaged to Amanda since she was twelve and their marriage will be an “affair of the state.” He sees the princess as a child; or worse, his duty. He treats her with the utmost care and deference, but there's no passion between them. Amanda is too naive to realize anything is amiss. When the maid informs her that Petros kisses her like a sister, she bursts into tears.

Changing into my nightgown, I wondered what had just happened. Her eagerness I could understand. She was young, inexperienced, untouched. Anything would feel good to her. But what about me? Was three months off men enough to sign me up for the other team?

Not quite. The maid continues to tutor Amanda at night but she never loses her interest in men, particularly Petros. She takes a vicarious thrill in seeing Amanda in his arms. The make such a beautiful couple that the maid feels excited just to be near them. For the first time, she has a chance to do something good in her life, by helping Amanda catch her prince.

When Petros invites Amanda on a Mediterranean cruise on his private yacht, the princess insists on having her maid chaperone.

The Dame pulls the maid aside for a stern warning. Amanda must come home a virgin, and prove it by a doctor's exam, or the marriage will not take place. The maid is to protect the princess's chastity by offering her body to Petros for relief. If she fails, she'll be released from her position and sent to jail. The maid has no choice but to comply. She must betray Amanda's trust, and ensure the royal engagement.

The tension on the cruise is sizzling. Amanda and the maid are treated like goddesses by Petros and his crew of loyal, prestigious sailors. Petros is a perfect gentleman, noble and gracious, but he’s also a bit of a playboy, in no hurry to set a wedding date. The princess has blossomed under the maid's tutelage, however, and their special friendship doesn't escape his notice. There's a priceless scene in which the women rub each other down with sunblock on the deck of the yacht, torturing a mesmerized Petros.

At night, in the stateroom they share, Amanda and the maid share every kind of pleasure imaginable.

I was thoroughly confused, and not a little ashamed-The things she had done to me surprised me, but the way I reacted to them terrified me. I had accepted being sent out here to relieve sexual tension. If Amanda was the one who had to be serviced instead of Petros, well, one had to have a certain amount of flexibility in these affairs.

But what I was doing with Amanda was more than service. It felt, to me, like love.

The maid decides she can't hurt Amanda by sleeping with Petros, although she longs to. The steamy sessions with the princess have made her desperate for a man's touch. Complicating matters, Petros recognizes the maid's honor and finds her irresistible. She can't help but be enamored of him in return. They are kindred spirits, bound by duty, resigned to their fate.

I challenge anyone to read La Bonne and not be charmed. A

Available in ebook and print.