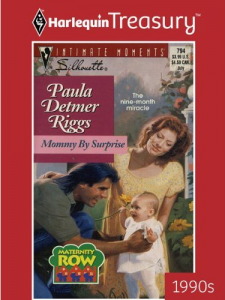 Prudy & Case’s first marriage ended when Case couldn’t forgive Prue for her deception. She desperately wanted a child (while Case didn’t) that she tricked him into getting her pregnant. She not only lost her baby, but her husband as well.

Eight years later Prudy and Case meet again. They let their attraction run loose and spend the night together. She gets pregnant. As she tries to get courage to admit it to him, he lands in her ER with a gunshot wound. And he needs someone to help him recuperate. Guess who’s the only one who can do it? :-)

I like Case, with all his surliness and bad temper. He loves Prudy so much, but his fear of having children drove him to hurt, eight years ago, and now. The scene at the end when he admits that he loves her, and their unborn daughter is heart-breaking.

We see some more of Luke, as well as Boyd & Stacy (h/h from Daddy By Accident (Maternity Row)).