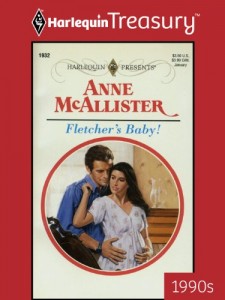 I loved Fletcher’s baby. Sam Fletcher(the guy dumped in Finn’s Twins) comes home from Tokyo to find his mother telling him that his Aunt Hattie left him everything, her inn and Josie. Josie came into his aunt’s life at fifteen after roaming from foster home to foster home and is now the inn-keeper.

Seven months ago when Izzy was getting married Sam went there to get away and one night he found Josie crying when on her birthday her fiancee didn’t come. They start drinking and end up making love. Sam doesn’t really remember the details, he feels guilty and the next morning Josie is gone to meet her fiancee. He figures she may be married now.

Josie has been in love with Sam since fifteen but he never noticed her, so she started dating Kurt even if he was more interested in his parishioners. She even agreed to marry him when she found out Sam was engaged. But on her birthday when he doesn’t come she realizes how alone she is , how wrong he is for her. She loses her virginity to Sam and the next day goes to tell Kurt but Sam is gone.

She is shocked to see him in the inn months later and when he questions her, she blurts out he is the father. Sam who has never faced anything he couldn’t handle in life doesn’t know what to do, so he goes to clear his head and then offers to marry her but Josie says no but he is determined to stick it out and wonders why is it that women find it to so easy to refuse him, he’s nice, not bad looking and kind.

He starts working from the inn but Josie keeps avoiding him and derailing his work. Sam also feels guilty that he sabotaged her relationship with a man he thinks she loves. But when Josie has a little scare they come close with him taking care of her and she even agrees to marry him temporarily for the sake of the baby.

Honestly I loved the book. Josie was stubborn and wanted love which she never had gotten, poor Sam was clueless but sweet. Josie was also used to hacking it alone so accepting help from Sam came a little hard since she think he was doing everything out of responsibility which he initially was. Seeing these two come together was awesome and I loved how Izzy(Sam’s ex-fiancee) gave him some insight into the female psyche.

Previous article: Guest Backlist Review: Secrets of Midnight by Miriam Minger
Next Post: Buying Books on the iThings Now that the Catalogs Are Gone