The first time I read Requiem for Ashes was under its original 1994 title, Murder in a Minor Key. I was working at the now-closed and much mourned Scotland Yard Books in Winnetka, Illinois, where I’d earned a reputation for liking books with quirky characters, or maybe it was for characters with quirky books. Either way, Albert, the most unlikely sleuth to grace any detective novel, stumbled and chain-smoked his way into my heart and head; I never forgot him, not in all this time. 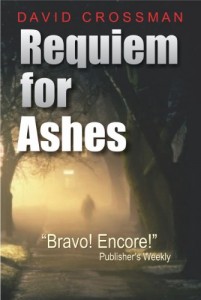 In 1983, Professor Albert–he of no last name, but a musical prodigy/genius/savant of international fame nonetheless–lives in his own head, writing music and lecturing at tiny and prestigious, thanks to him, Smethhurst College. He is safe there, able to think in the familiar language of half-notes and contrapuntal triplets, to shuffle to class where eager and talented young musicians absorb every word, to shop at Dunkin’ Donuts. Albert is completely divorced from the world around him and grateful for the mysterious workings of the New England college that feeds and houses him, taking care of those unfathomable and numerous awards, “plaques with records you couldn’t even play.”

To Albert, the school was the womb. It defined the parameters within which he lived and breathed. It sheltered him. It abided his imperfections. Forgave him for being clueless. Together with Huffy, his agent at William Morris, it coordinated his life; told him when to be where and got him there. Best of all, it welcomed him when he returned.

He ate free at the cafeteria.

Into this safety zone steps Andrew Tewksbury, Head of Archaeology at Smethhurst, who knocks on Albert’s door with the observation that the forgotten cigarette behind Albert’s ear had set his head on fire and the news that Justin Glenly, Middle Ages and Classical Languages, has died. A month earlier, Tewksbury and Glenly had the academic equivalent of a fight over Tewksbury’s paper on the Etruscans, something Albert struggles valiantly to understand as his colleague explains all.

For Albert, communicating with anyone is difficult and completely foreign; he’s learned that if he picks out and repeats an occasional word the other person has said, the conversational ball will keep rolling on its own and he can think about the next few measures playing in his head. He is neither unkind nor unfriendly, but music, for the reclusive composer and performer, is the “domineering mistress that commanded all his senses.”

Later that night, while eating a dinner of sardines and peanut butter and watching the news on his small black and white TV, Albert sees Tewksbury’s face on the screen: he’d been arrested for Glenly’s murder. This development effectively shuts down his muse and pushs Albert out of his cocoon, taking him over the next several months to the jail, the courthouse, to Tewksbury’s attorney after a guilty verdict is handed down, to a shopping mall. How Albert navigates these strange, new and disturbing experiences is at once touching and humorous. At the jail, he is Tewksbury’s only regular visitor.

He hadn’t been prepared for the search. He should watch more TV. It was embarrassing and they seemed suspicious when they didn’t find anything in his pockets but a sax reed and a tidal chart. It took him a long time to remember where the chart came from, then he realized he must have gotten it when he went to see his mother in Maine last year. He used the sax reed as a guitar pick.

They asked him why he didn’t have a wallet or any money. He said he didn’t own a wallet. He didn’t need folding money or credit cards … they didn’t fit in cigarette machines. Finally they called the school and got someone to identify him. Apparently it wasn’t that difficult.

He meets with Melissa Bjork, Tewksbury’s attorney, whose efforts at perfecting lawyerly inscrutability don’t prepare her for Albert’s wide-eyed and charming naivete. He has no idea how the world works, but manages to convince her that her client couldn’t be guilty, primarily because Tewksbury had quit smoking a week prior to Glenly’s death-by-sulfite-allergy murder.

“When he came to my apartment all he could think about was cigarettes,” Albert explained. “He’d quit smoking. Somebody who’s planning to murder someone doesn’t quit smoking.” Albert was sure of that. He’d tried to quit smoking once. He could certainly imagine committing murder in that state, but planning such a thing was out of the question.

Miss Bjork eventually believes him and sets him to the task of “chatting up” his other colleagues to learn more about Glenly, whether anyone had something against him. (“You can start with his mother and work your way out in ever-widening circles, I should imagine,” Tewksbury suggested early on, a conclusion borne out ultimately by students and faculty alike). Albert, terrified, clueless, girds himself in his tweed suit from high school graduation and sets out to be a detective on behalf of the one person who thinks of him as a friend.

And, here, Mr. Crossman, is where you made me a lifelong fan of your writing, of Albert. If the definition of bravery is to act in spite of bone-cracking fear, Albert is all that. You make him immediately likable and sympathetic at the same time your descriptions of his inner workings and outer perceptions are painted with exquisite (and delightful) care.

In his T-shirt and boxer shorts he banged around the darkened kitchen, preparing supper. He had meant to buy a light bulb, but they didn’t sell them at Dunkin’ Donuts. In the past he had simply transferred bulbs from room to room. Now there was only one left, by the bed.

He’d have to move soon.

The next morning, following his new routine of personal grooming, Albert put on his other tie … the white one. It would be impossible to say what he thought of himself as he walked across the common, but he held his face right out front, his hands thrust purposefully in his pockets. His step–yellow woolen socks in black patent-leather shoes–was jaunty, and he cut an irresistible figure against the ice and snow. He wanted only directions to the nearest windmill.

The recent change in Albert was the topic of no little speculation in the faculty lounge. The tropical fish of indeterminate species might have crawled out of the tank in the corner and taken up hairdressing at reduced rates and attracted less attention. Some things just didn’t change. Yet there he stood in the doorway … suit, tie, matching socks. For the first time in his life, Albert was making a fashion statement of sorts. What, exactly, he might be saying was anybody’s guess, but he was saying it unequivocally.

N.B.: I try to work “tropical fish” and “hairdressing at reduced rates” into my conversations or written communications on a regular basis, which is harder than one might expect.

Albert soldiers on, fortified by Sherlock Holmes, bewildered at the intricacies of human dialog and certain of his friend’s innocence. He interviews colleagues who paint a portrait of a thoroughly despicable Glenly, thereby opening wide the field of other potential suspects. In the meantime, word comes that Tewksbury has attempted suicide and is being held at the hospital. When Albert himself is attacked and seriously injured, landing him in the same hospital, the solution is clear: Break Tewksbury out.

More than a jail break occurs in the process of learning to pick locks on doors: Albert meets people whose paths he’d never have crossed before leaving the womb of Smethhurst and getting hit over the head. His deep capacity for compassion is roused. He falls in love.

And then terrible things happen: Another murder and still another after that. Albert’s world is rocked to its shaky foundation. He continues to follow his growing powers of observation to the next logical thought, dog-paddling through Stygian waters, weighted by grief. In the end, propelled only by his certitude and no proof whatsoever, he confronts a killer.

Albert had been confident he’d never get this far. He had no idea what to say or where to begin. The torch-bearing throng of gray cells that had initiated the uprising, that had passed him over their heads and deposited him at the door of the monster’s castle, fell silent when the beast appeared and now abandoned him altogether. “I know about you,” he said at last.

There are so many things I love about this book, most of it related to the wry and subtle humor that pervades the pages. You use metaphor like the finest seasoning and irony has found its home. The mystery, and Albert’s solving of it, was very satisfying. I was less interested in the “who” than the “why” and “how,” probably because I was so captivated by his awkward yet determined progress.

“You never know.” For some reason the words struck a chord in Albert, drawing him out of his worries for the moment, crystallizing a resounding, universal truth in their ringing simplicity.

He had found a credo: You Never Know. “You never know,” echoed Albert, who never did.

“One thing leads to another.” Albert was amazed how people dispensed these nuggets of wisdom like multi-colored spheres from broken gumball machines. “One things lead to another.”

I should note that the text I’ve quoted throughout is from a digital edition released earlier this year, which is slightly different than the original Carroll & Graf publication. Seeing some of the differences has been illuminating in a surprising way, but nothing readers of only one edition would notice. (I am intrigued, Mr. Crossman, because I think I know where you’re going with those changes.) If I have a quibble with the digital edition, it’s one we hear frequently: Missing or misplaced punctuation, page and paragraph breaks; underlining where italics should be. While aware of them, they were not enough to take me out of the story, but an annoyance nonetheless.

Good reviews should avoid the halo effect and I’ve been racking my brain to identify things that didn’t work for me. I’m still racking, which is not to say the book is perfect. Others more knowledgeable about police investigations and the legal process might have objections; real trials never occur as quickly as they do on television or in books, for example. And I have no idea if academia as presented here is accurate, although I thoroughly enjoyed your sharp characterizations, the internecine warfare in the name of scholarship and acclaim. Is there anything so ruthless as a world built on knowledge, on the acquisition and dispensing of it?

But Albert is the star and your obvious affection for him is catching, which had the unexpected effect of overcoming my persistent and systemic avoidance of amateur detectives. His conversations are what might happen if Chance from Being There understood “who’s on first.” His first trip to the bank, which results in an application for a Keogh plan and $125 in quarters that threaten to pull his pants down, nearly does him in. He is so obviously not from around here and yet his befuddled eccentricity invites us in and makes us welcome.

As Miss Moodie, English Lit, says, at the end, “Quite remarkable, really.”

Requiem for Ashes (and the sequel, Dead in D Minor) is available electronically at Amazon and Barnes & Noble for $.99. Used copies of Murder in a Minor Key (the title of the original Albert story) can be purchased through Amazon Marketplace and other outlets and will be released again soon in print at Amazon as Requiem for Ashes. According to Mr. Crossman’s website, there is a third Albert mystery in the works, currently titled Coda.

Previous article: REVIEW: Taking a Shot by Jaci Burton
Next Post: REVIEW: A Promise of Spring by Mary Balogh