The following is a guest review from dri who you can find at http://aquandrian.livejournal.com

I started pilfering Mills & Boons at the age of nine from a housemate who tactfully pretended not to notice, read every romance novel I could lay my hands on from SuperRomances to Victoria Holt to Barbara Cartland to Catch-22 (there was a sex scene in that, wasn’t there? that was enough!) and came back to the world of romance some twenty or so years later. Since then, I read almost exclusively Regency romances and UK-based chick lit, probably because I am a total Anglophile. I live in hope for well-written erotic romance that doesn’t make me want to throw the book across the room (or aeroplane in one instance), and for Australian-based romance with characters that don’t make my eyes glaze over with boredom. I worship Georgette Heyer, Agatha Christie, Meredith Duran, Sophie Kinsella, Anna Maxted, Sherry Thomas, Loretta Chase (we’ll ignore the Palace of Delight), Melanie La’Brooy, Jane Lovering, and Marian Keyes. I also have a slight obsession with the films of the 40s and 50s, a rabid love for music of all decades, and am currently in love with Dirk Bogarde’s leather accessories.

It’s true I bought an ereader just so I could read this novel. And I regret nothing! 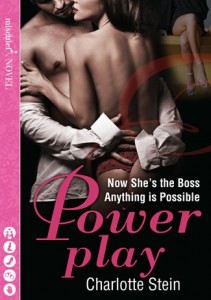 It was through a Dear Author review of Waiting In Vain that I discovered Charlotte Stein. Funnily enough, that too was the first ebook purchase I made. I was immediately hooked by the humour and the visceral hotness of her writing style, loved the short intense rightness of that short story. So when I stumbled across her booklist on Goodreads a few months ago, it was with a definite quickening of interest. What followed was intense disappointment at seeing all but one of the books/stories were in e-format. And then I saw the blurb for Power Play, and the decision was made in a split second. Hell, I think I bought the story before the ereader!

Power Play is one of two newest releases, the other being Sheltered which I have yet to read. At 260 pages, I personally would consider Power Play a touch closer to novella than novel but then I do like my books as doorstops. And certainly Power Play does read like a novella to me, so very intense and tightly focused is it with barely a breath taken between scenes. Or perhaps that was my own shortness of breath, heh.

Our female protagonist is Eleanor Harding who we meet when bent over the desk of her boss and about to be penetrated by a certain inanimate object. Said boss however exits the picture fairly soon and Eleanor finds herself in his job, faced with a dawning terrible attraction to the fumbling office boy, Benjamin.

What I loved first and best about this story was the sheer intellectual power of our heroine, the fact that we’re witness to every ethical tussle she experiences about the situation, the fact that she notices and analyses Benjamin’s reactions, and most importantly analyses her own. No witless female, our Eleanor. She’s scathing and rather wonderful, deeply complex and secretly vulnerable. Just my kind of female protagonist, thank goodness. I thoroughly related to her, increasingly so as the story progressed and most particularly at the end.

Benjamin did give me some pause, especially at the start when he’s so bumbling and a little too wide-eyed American boy. I couldn’t help but picture Tom Welling’s Clark Kent from Smallville. But as Eleanor learns about him, so do we. And I was secretly delighted as she was to discover just how clever he was behind all the gabbling and the dropping of things. He could have come across as manipulative but there’s such a wealth of generosity to his character that Stein never leaves us in doubt he is quite simply “a lovely, lovely man.”

The sex sears off the page. I kid you not. It’s quite unrelenting for a good long while but then I like that sort of read and was very appreciative of the fact that Stein never loses focus of the characterisation even once. As it should be. Every sex scene develops their relationship and it’s particularly fascinating to see how Eleanor struggles to maintain sexual dominance as her feelings respond to Benjamin’s artless warmth. The kink rockets up at almost a breathless pace and then just as I thought there was nowhere else to go after a most excellent and beautifully drawn out consummation, Stein twisted it.

Once all the kink’s out of the way, the tenderness comes in and it’s heartbreaking to see Eleanor’s confusion and yearning. There’s no saying how much I adored that cleverness on Stein’s part, to recognise that emotional bravery is so much more dangerous and powerful than sexual adventurousness. In a way, that almost made the one incidence of menage unnecessary for me but I did appreciate how Eleanor’s misgivings mirrored mine and how that did refocus the emotion of the primary relationship. The scenes following that are possibly the loveliest in the whole story.

I would have liked more detail of Eleanor’s family history, one that has clearly scarred her. Certainly it felt like we got enough of Benjamin’s and maybe Eleanor’s stuff was cut out for space constraints but I would have liked to see that unpacked. As it was, the reappearance of the former boss to sort of explain her conflict seemed a little unnecessary and almost forced to me but again I appreciated how that worked very cleverly into an ending that was utterly heartwarming.

The writing is strong and clean, something I always appreciate. I only found one formatting error, quite literally one lack of space. Praise be! And admittedly there were a few phrases where the sexual humour was a little crass and overplayed for my liking. But then I very much liked how every time I thought “Really? Did he really just say that?” Eleanor promptly thought the same thing. That sort of intelligent writing wins me over every time and makes me forgive any horrible phrase.

Deliciously taboo office sex, deep characterisation and unvarnished writing with not a single paranormal cliche in sight? That would be Power Play by Charlotte Stein. I’m so glad I bought that ereader!

Previous article: REVIEW: A Night Like This by Julia Quinn
Next Post: REVIEW: The Demon You Know by Julie Kenner