GUEST REVIEW: Giving It Up by Audra North 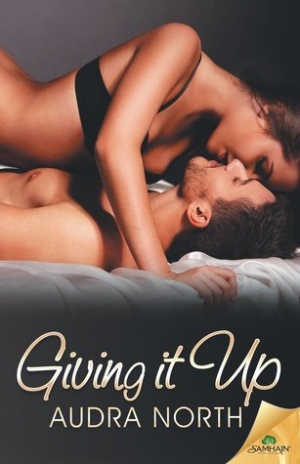 Warren, the hero of our story, is a man so caught up in the lives of others that he has no time for any kind of mutually satisfying adult relationship, especially since his last girlfriend ended things because she felt he didn’t pay her enough attention. He lives with his aging parents, to help care for them and his single sister with her young son. When he’s not bogged down in family obligations, he’s 100% committed to his high stress job as a SWAT Officer where his specialty is defusing explosives. He’s in control of everything, all the time. His co-workers bug him about why he doesn’t date, why he can’t make time for a girl, to which Warren thinks (but won’t say aloud) ‘I don’t have time to take on one more person’s life. I can’t shoulder one more fucking responsibility all by myself’. He knows it’s not supposed to be like this. But oh, what he wouldn’t give to have just one hour a week where he doesn’t have to think, doesn’t have to be in charge, where he can just let go and be in the moment. In fact, it’s that desperation that leads him to place a call to Queen Dommes, a call that Beatrice inadvertently overhears.

Beatrice is a photographer. She works as a photojournalist for the city newspaper but her longstanding dream is to have her works shown in a gallery, though she doesn’t believe her pictures are good enough.  She comes from a restrictive religious background, where women were always polite and subservient, one she gave up to strike out on her own. She has the support of her grandmother, a woman she loves and greatly admires. In fact, helping support her grandmother financially is one of Beatrice’s big stresses, and she’s taken on some extra photography jobs to help in this regard. She and Warren met a year ago at a party thrown by mutual friends who are now getting married and they are both involved in the wedding, Warren as a groomsman and Beatrice as the photographer. Warren does it for Beatrice, big time, but he seems to regard her with some disdain – he is always gruff and taciturn with her. In reality, Warren is just as attracted to Beatrice as she is to him but doesn’t see any point in trying to pursue any type of relationship since he hasn’t the time for one (nor does he think she’d be interested, which makes him understandably frustrated when she is around). When Beatrice overhears Warren’s private phone conversation with Queen Dommes at the wedding reception she makes a snap decision. It’s clear that Warren can’t afford what the Domme charges. But, having done a photo-shoot for Mistress Michelle at Queen Dommes, Beatrice has admitted to herself that she’s envious of the confidence the Dommes display. She quickly offers Warren a deal – a reduced rate for an hour of time together for a few weeks in which she’ll endeavour to give him that freedom  from control that he’s looking for (with her own secret desire to gain some confidence and self-esteem by plunging into the role).   It’s a business arrangement only (just like at Queen Dommes, which promotes itself as a role play service – no sex allowed), to which Warren reluctantly agrees.  And thus the stage is set for this unconventional romance.

I really liked the idea of two people learning the ropes (ha-ha) together. When Beatrice did her photo-shoot for Queen Dommes, she was struck by the absolute confidence the woman had. She turns to Mistress Michelle for some advice, explaining the rudiments of the situation and trying to get a better understanding of why men come to her. She gets this advice from Mistress Michelle:

‘”Our culture forbids men to be weak. What is forbidden often makes it so much sweeter, heightens the enjoyment. The vast majority of the time, our clients don’t need sex from us because we have already given them that which they are usually denied. The chance to hand over power to someone else for a time. The permission to be submissive. A trusted environment where they can give up control.”

“Give it up.” Beatrice recited the words written on the ads.

“Exactly.” Michelle gave her an approving look. “And we accomplish that through simple confidence. We issue commands as though it is a foregone conclusion they will be followed. We never say ‘I want. I want you to bend over. I want you to take off your shirt. That sort of thing.”

Michelle waved her hand in the air as if to imply that sort of commonplace thing, but Beatrice’s heart was pumping in her ears at the mere suggestion. Probably because she was imagining Warren bending over, Warren taking off his shirt.

“Saying you want something leaves the door open for it to be denied. You must not allow that to happen. Eliminate the want in your life and you will never want for anything. It is, ‘Bend over.’ It is, ‘Take off your shirt.’ You do not need to add a qualifier like ‘now’ or ‘immediately’ and certainly not ‘please.’ You have to own the role. You have to live the role. And you will be obeyed.”

Oh God, this is a lot to take in. To be so bold…could she do it? Owning something like this…living this life…that sounded intimidating.

It was one thing to live life through the lens of a camera. It was another thing to jump naked into a mud pit and wrestle it into submission.’

Armed with this new knowledge, and a book on dominance written by Mistress Michelle, Beatrice does some studying, picking up some interesting paraphernalia and clothing to really embrace the role, one she’s looking forward to playing. The first encounter she has with Warren is a little bit awkward and uncomfortable, but a whole lot of sexy, as the unresolved attraction between them comes to the forefront. It’s very hard for Warren at first, to really give up that control that he’s clung to for so long, but Beatrice is determined to give him what he’s paying for. Their first hour together ends abruptly with Warren realizing that this could become more complicated, with the relief he feels at getting that first time together out of the way combined with the knowledge that he can’t wait to do it again – and that it’s definitely something he wants to explore only with Beatrice.

The fine line therefore is the crossing of the contract that they’ve made with each other – five weeks, one hour each Wednesday evening – with the development of tender and affectionate feelings between them. As they connect emotionally in their time together, there are moments when their hour is up, and the clock is stopped and they are reluctant to part ways. And after their first few meetings it’s clear to Beatrice that she can’t take money from Warren, that her heart is becoming too invested. They share some steamy scenes of course – Warren relishes giving up control to Beatrice as much as she loves having it. When they start to get involved with each other’s personal lives, in particular when Warren lets Beatrice into his complicated family role, it becomes clear that he’s going to have to consider what it would mean to have Beatrice in his life full time. He struggles with the idea that she could be a partner to him, not another responsibility. Beatrice is willing and able to go the distance with him, if he’ll let her. The most difficult thing for her is realizing that in this she doesn’t have control – one hour a week with Warren isn’t going to be enough for her but she can’t force him into a relationship for which he’s not ready.

I really loved how this story played out, not just from a sexual perspective (because  there was some fabulous sexual tension and hot scenes), but emotionally as well. For Warren to be able to trust someone with his heart again was so wonderful to see and the relief he gets from realizing that Beatrice understands him and his needs  is palpable. But equally, Beatrice really grows into her new self, a confident, take-charge woman in all aspects of her life. She learns to take risks, to be bold, and it pays off for her in the end. It’s a really unique, touching, sexy, and sweet romance. It gets a well deserved A.