Continuing with my Mercyverse reading, which starts here. 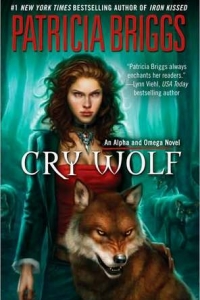 This is a book I’ve read multiple times in the past. Charles and Anna arrive in Montana, Charles injured and therefore off-kilter, Anna hesitant to commit to their relationship. Anna is also having difficulty reading Charles, and is easily hurt by what she perceives as rejection. Nor does her rape trauma disappear overnight, and when Asil, an old and possibly unbalanced werewolf, cluelessly challenges Charles to complete the mating bond, Charles’s protectiveness of Anna, combined with his silver bullet wounds, put him on edge.

Meanwhile, in a remote mountain range, a “monster” has attacked people and turned one old Vietnam vet, Willie, into a werewolf. Bran doesn’t realize exactly what the situation is, and he sends Charles and Anna out on a mission to take care of the “monster.” What they find in the mountains is an opponent more formidable and terrifying than they imagined—one who poses a threat not just to them, but to Asil, Bran, and through Bran, all of North America’s werewolves.

My husband complained that the first half of this novel was too “mushy,” but I did not mind the romance focus one bit. Once again I loved seeing Charles and Anna navigate their relationship and their individual fears—Anna’s, that she was unwanted; Charles’s, that Anna would believe that and leave him—as well as the greater threat out on the mountainside. Willie was a wonderful character, too; just as heroic as Anna and Charles in his own way. Asil begins as a villain but proves himself to be more complex than that, and we learn a lot more about Bran, one of the most fascinating characters in the series. A-.

“Star of David” by Patricia Briggs 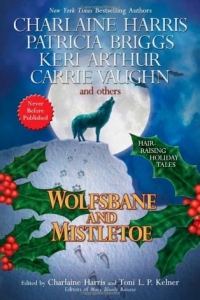 “Star of David” can be found in two anthologies, Wolfsbane and Mistletoe and Shifting Shadows. This is a short story about David, a mercenary who first appeared in Moon Called. David hasn’t been in touch with his daughter, Stella, since he came home from Vietnam. He was a new, uncontrolled werewolf then and he killed his wife for cheating on him while he was away, and for intending to leave him for her lover.

About thirty years later, Stella, David’s daughter, finally reaches out. Stella is hesitant to do so but she needs David’s help in defending Devonte, one of her foster children that she, a social worker, oversees, from something supernatural. I don’t want to say much more about what happens next because “Star of David” is such a brief short story.

I didn’t like the premise, that David half-accidentally killed his wife—I wasn’t certain Stella should forgive him such a thing—but I tolerated it better than I might have in a romance context. Other than that it was a solid story, and Stella and Devonte were appealing characters. The writing deserves a B but the premise is more of a D for me, so I’m giving this story a C. 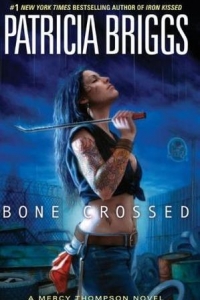 Bone Crossed begins when Mercy and Adam are interrupted by her mother’s visit. Stefan appears shortly after, burned and emaciated almost beyond recognition, and Adam and another wolf from his pack feed him their blood. Then Amber, an old college acquaintance of Mercy’s, arrives and asks Mercy to come visit her in Spokane, and help rid her house of a ghost.

Not long before her mom goes home, Mercy discovers two crossed bones marked on her garage. Marsilia, the vampire mistress, has found out that Mercy killed André, and in revenge she has punished Stefan, declared Mercy a traitor and invited any allies of the vampires to attack Mercy. When Stefan contacts Mercy mind to mind, Adam makes Mercy part of the pack, binding her to the wolves to keep her safe from the vampire.

Then Adam’s wolves are attacked by vampire magic, and realizing they need time to negotiate a truce with Marsilia, Mercy heads to Spokane to help Amber with the ghost. She is accompanied by Stefan, who plans to stay elsewhere unless needed. In Spokane there is only one vampire, the powerful, territorial and monstrous James Blackwood, and Mercy reasons that she is unlikely to run into him.

But Mercy is scarcely introduced to Amber’s husband Corban and her young, deaf son Chad, whom the ghost has been scaring, before she meets Blackwood, a legal client of Corban’s and a guest in their home. To survive Blackwood, Mercy will need the help of every ally at her disposal—and perhaps even that of her enemies.

Bone Crossed was a disturbing read for me because I read it within a month of reading Iron Kissed, and it takes place only one week later. Having just seen Mercy survive a rape at the end of the previous book, the last thing I wanted was for her to be coerced or victimized again so soon. Then, too, Mercy’s decision to stay in Spokane without telling Adam about Blackwood seemed at first to border on TSTL. I would have liked to understand her reasoning better as she was making this decision, instead of getting the explanation later.

Still, there was a lot to like here, including Chad, who was a smart, brave boy, Adam and Mercy’s playful, tender lovemaking, Stefan’s redemption, Marsilia’s scheming, and a certain fae who talks to oak trees.

Can I also say how much I’ve come to appreciate that fae stick for being there when Mercy needed it, too?
As courageous and clever as Mercy is, I thought she had better options than putting herself in Blackwood’s power with no backup late in the book, so this one gets a B-. 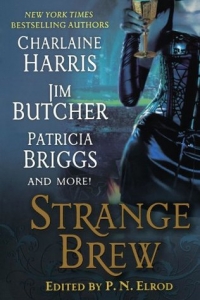 This story first appeared in the anthology Strange Brew, and can also be found in Shifting Shadows.

Moira Keller and Tom Franklin meet when Tom comes knocking on Moira’s door. Moira, who has had a premonition that she will die soon, is reluctant to open the door, but she does. Since she is blind, she cannot see Tom, but she senses that he is a werewolf.

Tom’s brother, a cop working undercover as a homeless man, has recently been kidnapped by Samhain’s Coven, a group of witches headed by an evil man named Kouros, and an acquaintance has told Tom that Moira is the only witch “with enough moxie to defy them.”

Tom isn’t sure he should trust Moira—she is a witch after all—and it takes him a little while to understand that she is also blind. But Moira’s brand of magic is white; she does not harm others. She agrees to help Tom, and together they approach the pay phone from which Tom’s brother last called him to begin their hunt.

This is a fun little story with romantic elements, and I especially enjoyed the way the connection between Tom and Moira worked, as well as learning about Moira’s history with Kouros. But the story felt sketchy and underwritten to me, as if it were all but begging to be expanded, and I was sorry to see the romance rushed. I also wanted to understand better about the source of Moira’s premonition, and why at one point, her magic bounces off of Tom.

The author has said that she plans to write more about Tom and Moira, and I hope those plans come to fruition, since both are interesting characters. C+/B-. 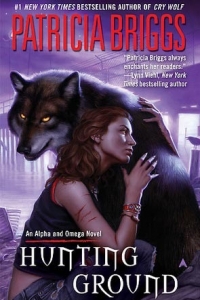 This novel takes place about a month after Cry Wolf. Since Bran’s decision to bring werewolves out in public, a conclave of alphas has been called in Seattle. Bran planned to attend himself, but something tells Charles that Bran shouldn’t, and after he argues with Bran, it’s decided that instead, Charles and Anna will go.

The proceedings are to be monitored by a fae named Dana Shae, who, it is hoped, can keep the European alphas from exploding in violence. Not that this will be easy, given the sociopathic nature of Jean Chastel, the dangerous French alpha, and his enmity with Arthur, the leader of the British wolves.

Tom and Moira from “Seeing Eye,” make an appearance here, accompanying Anna on a shopping trip during which all three are attacked by a pack of vampires. Charles must then keep his violent, protective urges in check—and the stakes only rise during and after a hunt.

Back in 2009, I gave Hunting Ground a B+. This time, I enjoyed it somewhat less, although I had forgotten much of the story. My 2009 review seems to have been focused a lot more on the progress in Anna and Charles’s relationship. Because I’m now reading with the benefit of hindsight, I was less engaged by that aspect or by Anna’s growth this time, and therefore focused more on the external adversary.

The conflict with this big bad was less compelling than the confrontation with the villain in Cry Wolf. Here, for much of the book it wasn’t clear who the villain was, but the fact that this person had to hire vampires made him or her seem like less of a threat.

A love scene late in the book seemed shoehorned in; Charles and Anna were so exhausted that I didn’t understand why then. And after Bran said he couldn’t get rid of Jean Chastel because if he did, he’d have to take over Europe, it wasn’t clarified, at the end of the book, who will run Europe from here on out.

Still, I liked Anna’s growth in confidence and happiness, and Charles’s struggles to open up to her. I also enjoyed Ric, an Austrian omega werewolf belonging to the Italian pack, who was introduced in this novel. His interactions with Anna were delightful. Moira and Tom were far more interesting here than in “Seeing Eye,” and I found the denouement exciting, too. B-.