The Rook by Daniel O’Malley

A couple of you mentioned enjoying this book in our December open thread. It had been languishing on my TBR pile for years, and the love in the open thread prompted me to actually read it. 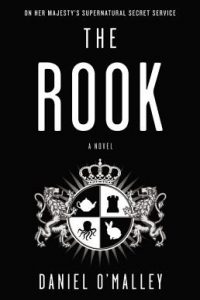 Myfanwy (rhymes with Tiffany) Thomas comes to in a park with no memory of her past, surrounded by dead people wearing latex gloves. It’s evident that she killed them, but not why or who they are. Or for that matter, who she is.

A note in her coat pocket (from her predecessor, the Myfanwy she was with her memory intact), apprises her of her identity and suggests she find a safe place as soon as possible. She’s also carrying another letter with the keys to two safe deposit boxes. That letter informs her that the keys correspond to two options: a choice between resuming her old identity and learning why there was an attempt on her life or assuming a new identity and escaping England as soon as possible.

A mishap at the bank (more dangerous people wearing gloves) makes Myfanwy curious enough to choose to the red pill. She retrieves a binder full of information and a key to a safe house. It turned out that old Myfanwy Thomas, whose memory and personality have been wiped out, was a Rook—that is to say, an executive in the Chequey, a kind of secret superhero organization whose members battle supernatural threats to England.

With the aid of the binder her predecessor left her, Myfanwy resumes her identity as Rook Thomas, but she needs to be vigilant. The Chequey is a powerful organization and one of Myfanwy’s fellow upper-echelon members is behind the attempt on her life. Myfanwy has to unravel the mystery and identify the would-be murderer before she is killed.

This was a fun read. The setup is riveting and the book is original and fresh relative to other urban fantasy novels. Myfanwy (either version of her) isn’t streetwise or cynical (she does make wisecracks, though). There are no vamps or werewolves, and the narration is part third person and part epistolary first person, neither of which are typical of the genre.

The binder is full of letters from Old Myfanwy to New Myfanwy and through them, smooth exposition gets what we need to know across. The two Myfanwys are very different from one another. Old Myfanwy was organized, competent and smart, but underconfident and afraid of her power (she can kill people with a touch). New Myfanwy is much more confident and has fewer qualms.

There’s a lot of humor in the book and the good guys are all likable. My favorites were Old Myfanwy and Ingrid, her secretary. The Chequey building (a kind of James Bond / MI5 headquarters for the supernaturally gifted) houses an old, stodgy organization and it’s entertaining to see New Myfanwy shake things up.

Part of the joy of the book is in the discovery. We learn about the Chequey along with New Myfanwy, both from the unfolding events and the letter-filled binder. We’re right with her as she struggles to stay abreast of all that she needs to know to survive. And she does that with panache, too.

My main criticism is that there wasn’t as much depth to the characterization as I would have liked. Additionally, Old Myfanwy was my favorite character but since all that remains of her is the binder, I doubt I’ll see much of her in the sequel, and that makes me sad. B-.

Sixteen Ways to Build a Walled City by K.J. Parker

I picked up this one because I saw a couple of people recommend it for consideration as a possible contender for the Hugos. It was an interesting, different kind of book and I enjoyed it but I’m glad it isn’t a Hugo finalist since it has some obvious flaws. 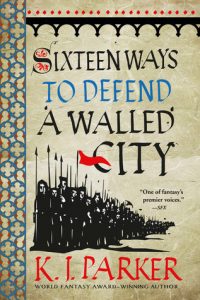 The plot concerns a siege and an engineer. The siege is based on the Siege of Constantinople and the engineer is our main character and narrator, Orhan. Orhan is a colonel of engineers in the empire’s military force. He and his engineers are short on rope and he is attempting to bilk some rope from a supplier in a town near the city that is his home when the town he is in is ransacked and its supplies burned. Orhan only survives because the raiders mistake him for one of their own. He takes advantage of the ensuing chaos to escape and returns home.

Orhan got as far in life as he has by lying, cheating and stealing his way to the rank of colonel. He is scrappy, snarky and pragmatic. He’s also smart and thinks one or two steps ahead of most people. That and his sense of humor are two of the things that make him likeable despite himself. I say despite himself because Orhan is not a good person.

When the navy is lost to enemy ships and the infantry killed in an ambush, Orhan and his engineers are all the city has left. Can he lie, cheat and steal his way to survival, not just for himself but for all the people who depend on him now?

The first half of the book was hilarious and clever. There were surprises I did not expect, including some that even Orhan, for all his quickness, didn’t anticipate. Even though Orhan isn’t good-hearted, he is a good guy within the context of the novel because he is all that stands between the city’s inhabitants and death. There’s a fish-out-of-water aspect to his story, too; he makes an improbable leader. Yet he rises to the occasion.

Orhan threads one needle after another. Even he doesn’t understand why he’s propping up the empire’s capital city instead of merely watching out for his own skin. After all, he’s an ex-slave and as a “milkface” he has been discriminated against by the patrician “bluefaces” all his life (this bit gave me pause; I was not comfortable with the idea of pale-skinned people being discriminated against for their skin color).

Orhan’s narration is interesting. There is no attempt made at avoiding anachronistic language; to the contrary, the novel thrives on it. How it does that is a neat trick. The reader gets so swept up in the jokes that after a while the modern vernacular and idioms seem like part of the fun.

But in the second half, the novel falters. Things get more serious (as they must), and as the humor fades into the background. The tightrope the author walks slackens enough that the writing wobbles. It turns out that the humor obscured a lot, including a lack of character dimension. The few female characters suffer from this even more than the men.

The last quarter of the book reads like the author wrote himself into a corner and couldn’t find a good way to resolve the conflicts he set up. The ending isn’t exactly a cliffhanger (this seems to be a standalone novel) but nevertheless, things remain murky as to what the future holds. Still, on balance, it’s not a bad book. C.

Back in the 1990s, I was a huge Mary Jo Putney fan, and the Fallen Angels novels were some of my favorite books. In 2012, I tried to revisit the series, but it was hard to finish Thunder and Roses, and I wrote Dancing on the Wind off as a DNF. Recently, a friend mentioned that she too was disappointed in the early books in the series when she reread them, but that One Perfect Rose, the last book in the series, held up well. Her comment convinced me to give rereading it a shot. 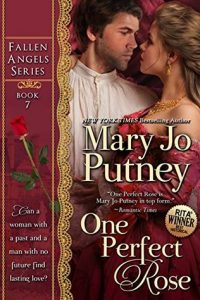 Stephen Kenyon, a duke, has lived an exemplary life, fulfilling all his duties, including making a well-regarded match. He had hoped that love would grow between himself and his wife but it never did. Now widowed, Stephen intends to seek a new bride, this time without regard for convention.

Stephen’s plans are foiled when he experiences gastric pains and his doctor tells him that he has a tumor and at most six months to live. Since time is in short supply, Stephen takes off on a solitary trip on horseback, to give himself a chance to come to terms with his impending death.

One afternoon, Stephen catches a performance of The Tempest given by a family of itinerant players. A couple of the actresses are gorgeous but his eye is drawn to another whose beauty is more subtle. The next day, he is riding toward the next town in the rain when he spots the theatrical family traveling ahead. A child falls into river rapids and Stephen dives in to save him. Stephen sustains a head injury and wakes to find himself in the troupe’s wagon, tended by the boy’s oldest sister, Rosalind, the woman he noticed earlier.

Rosalind is also widowed and hers too was a less-than-ideal match. She was adopted as a young child after her parents found her on the street near the London docks when she was only three or four. Rosalind is even-tempered and practical, and Stephen comes to see her as the eye in the dramatic storm. She steadies her family and does the job of the stage manager as well as taking on a small role here or there.

Rosalind and Stephen are attracted to each other but Stephen feels he can’t marry due to the death sentence that looms over him. Things change, though, when his secret comes out.

This book was a refreshing and wonderful surprise. The premise, that the hero is living on borrowed time, is one I have not seen done before or since in a romance context. The characters are sincere, intelligent and thoughtful. Stephen is a bit stodgy but he’s also solid and appealing. Rosalind, with her pragmatism and kindness, is easy to love. One of the best aspects of the book is that they hash out their disagreements like adults. They listen to each other and adjust their opinions based on their conversations.

The book is well-paced, especially considering that it was published in the 1990s (it compares very favorably to Kinsale’s The Shadow and the Star, which I reread recently). The plot feels sturdy, and the book is emotional without being angsty. Toward the end, I shed tears.

I loved that there were things to discover about both Stephen and Rosalind. Stephen’s struggle to accept death as a part of life and feel at peace with it is the theme that ties everything together, but Rosalind also has things to grapple with—a childhood trauma she has blocked out, and the identity of her biological parents.

Some of you may remember that in my review of Lucy Parker’s Act Like It, I took exception to the egregious lack of research into the theater. Here, in One Perfect Rose, the theatrical milieu is captured beautifully. Everything that Parker got wrong, Putney gets right.

There were just a few things that bothered me, most having to do with Rosalind’s backstory. The villains in her past were over-the-top. It was hard to believe that a three- or four-year-old child could scavenge and survive on the street even for a few weeks.

I also felt that Stephen’s spiritual experience late in the book was a little belabored.

Still, I thought this book was very strong. A-.

→ Janine
Previous article: REVIEW: Starbreaker by Amanda Bouchet
Next Post: REVIEW: The Parable of the Sower by Octavia Butler