Sunita’s Best of 2010 Review: Dare She Date the Dreamy Doc? by Sarah Morgan

You have become of my autobuy, go-to authors, not just in category romance but as a writer of satisfying reads, full stop. The first book

of yours I read was a Medical Romance in your Glenmore series, when M&B briefly made it available as one of their free reads. I enjoyed it very much, so when Dare She Date the Dreamy Doc?

came out and I saw it was set in the same place, I was immediately interested. 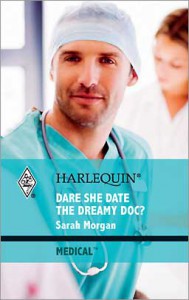 Glenmore is a fictional Scottish island which is very busy during the summer tourist season and cold, windy, and underpopulated otherwise. It has limited medical resources because of its size; there is a clinic for routine and manageable illness and injuries, and patients who need more critical care are airlifted to a mainland hospital. The community is small and tight-knit, and most of the people we get to know across the four books are not billionaires, millionaires, or aristocrats.

In Dare She Date, we are introduced to Jenna Richards, who comes to the island to take a position as a nurse after a humiliating and financially unequal divorce from her adulterous husband. Jenna is reluctantly accompanied by her teenage daughter, Lexi, whose hurt at her father’s disinterest in her and unhappiness at having her life turned upside down is almost exceeded by her horror at the poor mobile phone reception on the island. Jenna is attractive but not drop-dead gorgeous, and her husband’s infidelity has sapped most of her confidence. They are met at the ferry by one of the clinic doctors, Ryan McKinley, who is taken aback by how attractive he finds Jenna and how unaware she is of that effect.

Jenna and Ryan’s attraction to each other develops slowly and hesitantly. Jenna has trouble believing such a good-looking man would find her sexy and worries about any effect on Lexi, and Ryan realizes between their work relationship and her recent divorce, Jenna is not really fling material. Despite the clear chemistry between them, they resist for more than half the book. This results in some really great sexual tension, with which you expertly tease and torture the reader. Along the way, while they resist each other, they become friends. The scene right before they finally give in and act on their feelings has some very fun dialogue:

He squinted at the crumpled paper. ""10 reasons why I shouldn't fall in love with Ryan-‘" Ah.'

With a groan, Jenna covered her face with her hands. "Please, just ignore it-‘'

"No.' His voice was calm and steady. "If you can make a list of ten reasons not to fall in love with me, I have a right to know what they are.' He scanned the list and frowned. "I put you off your food? That's why you don't eat?'

Mortified, Jenna just shook her head, and he sighed and tucked the mangled envelope into the back pocket of his jeans.

"If you want my opinion, I don't think it matters that you've been divorced for less than a year, nor do I think your age has any relevance. The fact that I put you off your food might be a problem in the long term, but we won't worry for now. As for Lexi-‘' He stroked his fingers through her hair. "I can see that might be a problem. That's why I stopped when I did. I didn't want her to walk in.'

"For selfish reasons. I want you, and you come with a daughter.'

Did he mean he wanted her body or he wanted her? She was afraid to ask and she found it hard to believe that he wanted her at all. "Why do I always meet you looking my worst?' Jenna couldn't believe the unfairness of it all. He looked like a living, breathing fantasy and she was wearing Lexi's cast off tee shirt.

"I think you look fantastic.' Ryan slid his hand into her hair, studying each tangled curl in detail. "Does your hair curl naturally?'

"Yes, of course. Do you think I'd pay to make it look like this?' She snapped the words, embarrassed that she was looking her worst when he was looking his best, and really, really confused by the way he made her feel.

"I really like it.' His smile was slow and sexy. "You look as though you've had a really crazy night in some very lucky man's bed.'

As this excerpt demonstrates, Jenna is often painfully insecure. She is continually second-guessing herself and wondering whether Ryan’s interest in her can be genuine and lasting. As I initially read the book her insecurity made me impatient, but as I thought about the character, I realized that she reflected the way many women feel in her position, and her unwillingness to fight her ex-husband for her rightful share of the marriage assets is not unusual. As an author, you are very good at creating a character with believable flaws and then following through by depicting the kind of behavior those flaws produce. Jenna’s insecurity made me uncomfortable at times, but then I realized that I would be uncomfortable in real life if I were witnessing this behavior. And that means, I think, that Jenna is a realistic character. Yes, Glenmore is a fictional place, and we know that Jenna and Ryan will get their HEA in less than 200 pages, but they are realistically depicted.

Ryan is not quite as well developed as Jenna, perhaps because this is really her story. He is handsome, thoughtful, sexy and truly caring about the people around him. His backstory is presented in less detail, and veers into unforgiveable-ex territory, but he is an excellent match for Jenna. And he is seriously yummy. Wait, did I say that already?

The plot is relatively straightforward. Jenna and Lexi slowly become comfortable on the island, as Jenna begins to find her feet and her confidence and Lexi makes friends. There is an accident which cements Lexi's place among the locals and allows Ryan and Jenna to show their medical chops, and there is a brief stretch where Jenna gets cold feet and decides she'll be a terrible mother if she gets involved with Ryan. Luckily, Lexi identifies this momentary role reversal and straightens her mother out.

Dare She Date the Dreamy Doc? is not a book which breaks new ground. But it excels at what it sets out to do, and it’s not a by-the-numbers book by any means. Jenna is 33 and never stops thinking about what’s good for her daughter. Ryan is a hottie, and he’s clearly well off, but he’s not a gazillionaire. No one is the handsomest, or the richest, or the most accomplished. No one has a private plane. The conventional aspects of the category form are expertly presented, and the unconventional elements are a breath of fresh air. And best of all, while both Jenna and Ryan have past baggage and emotional issues, they behave like adults. Thank you a thousand times for that.