I’ve heard your name mentioned whenever readers talk about their favorite m/m mysteries and paranormals. You’ve even been the subject of an If You Like column here at Dear Author. But although I’ve read your first two sets of Petit Morts stories, I never read any of your own series or standalone novels and novellas. This past summer I was looking for more m/m mysteries with romance, and I went to your website, where you generously offer half of Among the Living as a free read. It took me about 5 minutes’ reading before I bought and downloaded the whole book, kicking myself all the while for taking so long to discover it. 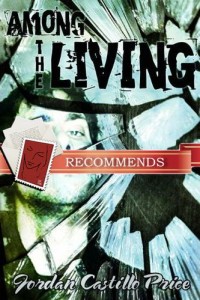 Among the Living is the first novel in the PsyCop series, which is set in present-day Chicago with one important twist. The Chicago Police department has a Paranormal Investigation Unit, in which detectives with a range of psychic abilities are paired with non-psychic partners (called NPs in polite conversation and Stiffs the rest of the time). You clearly know your Chicago setting, and by the end of the second chapter I knew I was in a familiar place with an expert guide.

Victor Bayne, our narrator, is a 5th-level medium;, yes, he sees dead people. Lots of them. This makes him very good at solving cases, since he can frequently talk to the murdered victims, but it also means he sees ghosts everywhere. He takes Auracel, an anti-psyactive, when he wants relief, and he lives in a spartan, all-white apartment to reduce the sensory overload when he’s at home. Vic is not exactly in the closet, but he’s not out and proud at work.

I finished the wrap before I got home and spent an extra minute trying to get mayo off my sportcoat. I gave up when it became obvious that all I’d accomplished was embedding rolled-up fragments of cheap paper napkin all over myself. I realized that I’d dropped my other coat off at the dry cleaner’s about four months prior. And I wondered if they would give the thing to me without the pickup slip, or if they’d given it away to Goodwill by now.

Vic is one of the most engaging narrators I’ve encountered in fiction. With first person POV, a reader either takes to the narrator or gets tired of him; I can listen to Vic talk all day. He’s smart, funny, and honest about himself to the point of self-deprecation. When he falls for a fellow officer (and Stiff), the gorgeous and accomplished Jacob Marks, he can’t quite believe it’s mutual:

He slid his hot mouth from me and then flipped me around, one strong hand keeping me from tripping over the wad of clothing at my feet. “That’s right,” he said, caressing the side of my cock with his cheek. “I want to look up into your face while you come.”

And then my awkwardness increased exponentially as I realized Jacob Marks was gonna stare at me while my cock sank into his throat. He was gorgeous–simply beautiful. The most handsome man I’d ever been with, that I ever even dreamed I’d be with. And yet it was easier to spread myself wide open and half naked on that damn window than it was to look into his eyes.

Vic and Jacob are tasked to work together on a serial killer case in which the murderer kills gay men after sex and leaves their bodies in set-pieces of shattered glass. Jacob’s partner, Carolyn is a level-2 PsyCop who can tell if people are lying, which makes her a valuable detective but often awkward as a coworker or friend. Vic’s longtime Stiff has just retired, and his new partner is a young woman who has passed the test that differentiates psychics and non-psychics. The mystery storyline skillfully integrates the mundane aspects of police work with the twists that arise when psychics are involved. Vic’s harrowing training to become a PsyCop turns out to be instrumental to his ability to determine who the killer was. I was thoroughly immersed in both the mystery plot and the larger world.

This book is novella-length, but it is so well paced, and the characters are so interesting, that I didn’t notice the shorter word count. I definitely wanted more when it ended, but that was because I was engaged by the characters. I wanted to see where Vic and Jacob went after this installment’s HFN. I wanted to know what happened next to their respective partners. And I definitely wanted to read more set in almost-but-not-quite Chicago.

Much of my pleasure with the novella stems from Victor’s voice, but that voice is a reflection of your overall writing style. It’s deceptively straightforward and lacking in frills, but it rewards careful reading. Some passages that are so understated that they almost feel like throwaways, but they add immeasurably to the story and to the reading experience. The romantic storyline is developed through Vic’s matter-of-fact perspective, so although I realize and believe in Jacob’s attraction before Vic does, the depth of their mutual attachment kind of sneaks up on me. And as a consequence, the utterly romantic last paragraph gets to me much as it does to Vic.

Ahoy readers: bonus materials! In addition to the novella- and novel-length installments of PsyCop, Ms. Price has written several short stories in the PsyCop world. Two of these are available for free at her website and elsewhere and bookend Among the Living. Thaw is a very short and sweet amuse-bouche that takes place after Among the Living and is set in Chicago at Christmastime. Inside Out is a prequel with an unusual genesis and is written from Jacob’s POV. Both are well worth reading.