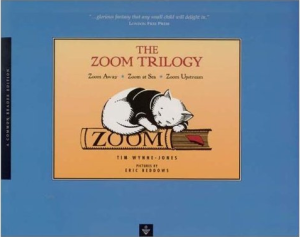 Years ago, before I was on the internet or associated the word amazon with anything other than ancient female warriors, I used to get a book catalogue called “A Common Reader.” It was an eclectic mix of fiction and nonfiction with enticing descriptions which several times coaxed me into buying many books. The one section I always turned to first was the children’s books. I will confess to being a children’s book junkie with a collection of them all for myself. Alas, this catalogue is long gone, a victim of….who knows. But three of the books they urged me to buy, and which I did buy, are by you. They are the trilogy “Zoom at Sea,” “Zoom Away,” and “Zoom Upstream.” 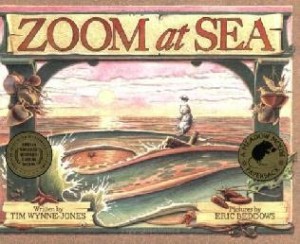 I love Zoom. He’s such a polite, well mannered cat who loves the water. “Not to drink – he liked cream to drink – Zoom loved water to play with.” When he finds a diary written by his seafaring Uncle Roy and addressed to him, he sets out and discovers a new friend named Maria who lives in a magical house and with whom he shares three adventures. In the first, he gets to enjoy a day at sea after Maria turns her vast kitchen into the ocean. But when he misses meeting his Uncle, Maria invites him back whenever he wants. 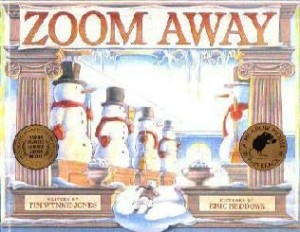 The second adventure sees them off to the North Pole where Zoom ties on his skates and is watched by gulls, grebes and seals as he skates round and round. But when he spies his Uncle’s vessel “The Catship” caught in the ice, his Uncle has already “boarded a passing iceberg and are headed south.” Zoom puts a captain’s whistle around his neck then he and Maria head home where they settle in front of a fire where Zoom dreams of traveling with Maria and Uncle Roy to somewhere warm.

Where, he wondered. And when would he see the brave captain?
He closed his eyes.
He hoped it would not be too long. 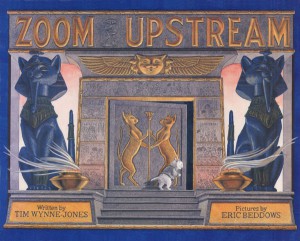 In the last adventure, Zoom is helping Maria tend her garden when the phone rings and Maria goes to answer it. Zoom stretches out for a nap. When he wakes up he discovers her note. “It’s the captain. Had to go. No time to lose!” Following after her, he discovers a passage way behind some books on a shelf which leads to an Egyptian tomb. Here he saves Maria who’s been wrapped as a mummy then together they track his Uncle to “The Catship.” Here he finally meets his Uncle, “a large yellow tomcat in a captain’s hat.”

“Welcome aboard,” he said. “And just in time for a bowl of grog.”
Zoom couldn’t speak for smiling.
“We’ve got quite a trip ahead of us,” said Roy.
“Where to?” asked Zoom.
“Upstream,” said Captain Roy. “To search for the source of the Nile. Are you game, my small friend?”
“Yes,” said Zoom.
“Good,” said Maria.
“Then it’s as good as done!” said the captain.
And they all sailed off into the gentle Egyptian night.

The illustrations by Eric Beddows are delightful, full of life and the details of Zoom’s adventures. I especially love the endpages of “Zoom Upstream” which look like the walls of an Egyptian cat tomb. The level of your writing is perfectly set for younger audiences and beginning readers. The adventures are fun without being scary and just right to lure people into their own fantasies and wondering of what’s behind doors and books and inside nooks and crannies. I will reluctantly admit that the last book falls a bit short of the first two in that there are aspects of the story left unexplained while the ending led me to believe that there would be a further book to tie up the adventures.

Zoom is sweet in his cat’s curiosity to know the sea, the North Pole and what’s behind the stone sentinel cats in the “room aglow with torches” where “the walls were crawling with pictures, and all the pictures were of cats.” He’s full of wonder at what he sees and filled with a spirit of adventure to discover more. I think he’s a marvelous guide to lead young minds into creating their own magical worlds and I’m glad to see that he’s still in print in single editions or the new trilogy from Groundwood Books. Go Zoom!