REVIEW: Zero at the Bone by Jane Seville

It came to the reviewer’s attention that this story is fan fiction of Brokeback Mountain (Original posting.). This was unknown to the reviewer at the time of the review. 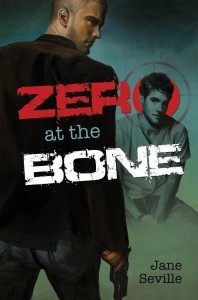 Denise Rossetti recommended this book to me late last year, but it took Maili ALSO recommending it to me recently to finally make me read it. I think I had about 7 hours of sleep in the three days since I started it. It’s just…brilliant. As I write this review a few days after finishing it, I’m still lost in your world, thinking about the characters, wishing them well.

Dr. Jack Francisco is a maxillofacial surgeon who witnesses a mob murder and is taken into protective custody. He gives up his life and his job (OMG, all that training!) in order to do the right thing and testify about what he saw. But he’s quickly found by a hitman, known only as D, who refuses to kill Jack because he’s been mysteriously blackmailed into taking the hit and can’t bring himself to do it. He’s one of those mythically moral hitman who will only take the hit if the mark “deserves” to die. One might roll one’s eyes at the cliche and might even, in a dorky moment, quote Gandalf (“Many that live deserve death. Some that die deserve life. Can you give it to them, Frodo? Do not be too eager to deal out death in judgment. Even the very wise cannot see all ends”), but by this point, your writing and characterization had pulled me in so perfectly, I really didn’t care about quite how much disbelief I was suspending.

D takes charge of Jack (if HE found Jack in protective custody, someone else would too, and in sparing Jack’s life, he felt he’d taken responsibility for it), and they wander around the country, avoiding death from the many people on their tail (mob hitmen, mysterious people after D, Federal Marshals who want Jack back), and falling in love. One thing I ADORED about this book was that they only started noticing each other physically and being attracted to each other and falling in love AFTER the danger was (mostly) over. When they were running for their lives, they were running for their lives and not stopping to fuck like bunnies, or even stopping to make eyes at each other. And yet the sexual tension, the unacknowledged attraction was still there and I’m not sure how you did it. Brilliantly done.

That’s pretty much the plot for half the book. The second half is taken up with trying to keep both Jack and D alive through the trial and then trying to clean things up enough that they could get their HEA. But this bare bones summary does the story such an injustice. You don’t shy away from the moral issues these two men have to face, you don’t shy away from showing their struggles with themselves and with each other. And OMG, you don’t shy away from their emotions. You show Jack struggle with his feelings for a hired killer. You show D’s slow return to emotional life so carefully, so perfectly, I literally couldn’t put the book down:

D shut his eyes, every cell in his body pushing and pulling at him…pulling him toward Jack, pushing him away, a tug-of-war where nobody won. He shuffled forward, slow and hesitant steps that drew him up behind Jack. He didn't turn from the window although he surely knew D was there. D's hand rose from
his side, a marionette arm on strings, his breath going shaky and panicked like a spooked horse. Jack didn't move.

Fuck it. D let his hand fall to Jack's shoulder. He felt him flinch a little at the contact, but he didn't turn. The feeling of Jack beneath his hand, warm through his shirt and solid and strong and alive, sent another blast against that vault door, shuddering it on its hinges. He put his free hand on Jack's other shoulder, his head sagging down. He could feel Jack thrumming, like putting his hand on the hood of a car with the engine
running.

D gave up. He couldn't fight this, at least not now. [ . . . ]-‘it was all too much, even for him. He tilted forward until his forehead was resting against the back of Jack's neck. A great exhale rushed from him and
he found himself hanging on to Jack's shoulders for dear life.

I’m still drowning in these characters a full day after finishing this book.

Also, the suspense was unbelievably good. I am not a mystery reader and I rarely read suspense, so the fact that I had no idea about the course of the plot might not say much, but I think it was wonderfully done. My heart was in my throat for HOURS on end and I could NOT put this book down. (It might have helped that I was reading on my iPhone — it’s so difficult to read ahead.)

Niggles: Jack had a doctor’s bag and it had stuff in it. Do doctors REALLY have doctor’s bags nowadays? Especially specialists like Jack? If they do have doctor’s bags, would he really still have it all through the many transfers of protective custody? And if he DID keep it with him, would it really have medicine in it? And syringes? Really?

Also, Jack’s profession is not fully integrated into his character. He chafes a little at losing it in the protective custody, but considering how what D does is SO much a part of who he is, in comparison there’s no discussion of WHY Jack chose to do what he trained for. It’s part of his Type A personality and it’s used to discuss moral issues:

"How about deciding whether you're going to treat the woman with the head trauma or the drunk driver who mowed her down? Or whether to let a man die of gunshot wounds because you know he shot a cop on his way down? How about treating a woman who's been beaten nearly to death and having to watch her walk out the door back to the husband who nearly killed her while she tells you that he didn't mean it, not really! Don't you fucking talk to me about hard choices, and harsh reality. Just because I didn't tote a rifle around Kuwait and never put a bullet between someone's eyes doesn't mean I live in some world of sunshine and rainbows, D. I live in a world where I spend months putting a four-year-old's face back together after her own father smashed it in with a bowling ball. You think you've got it so hard, and maybe you do, but the shit is tough all over. Fucking suck it up, man."

But his career is not as brilliantly a part of him as being a hit man is part of D. But that’s really an “in comparison” niggle rather than anything else. If D hadn’t been so brilliantly done, I don’t think I would have noticed this about Jack.

D’s “dialect” is…slightly annoying. When he’s thinking to himself about whether or not to kill Jack:

Just do it. Fuckin' do it. You can live with it. You cain't live with what'll happen if you don't, and that ain't no figure a speech. Only takes a second. Two shots. Shut them eyes a his lookin' at you like they see through ta yer bones. Fucker; why does he keep lookin' at me like that? Most folks look away. Look at the floor, at the ceiling, at their own hands, anywhere but at me. Biggest damned eyes I ever saw on any man, and bluer'n the sky down in Bryce Canyon. Big enough ta hold all the life in him so's I can see it, the life they want me ta take, the life I'll hafta stand here and watch leave him. Stupid motherfuckers killin' their own and makin' me clean up for 'em like they fuckin' branded me.

It’s part of him. It’s perfectly sustained throughout the book. But it’s never explained by where he came from (either geography or class). And it slowed down my reading sometimes enough to be mildly irritating. But not enough to stop. Never enough to stop. Did I mention I couldn’t put this book down?

And finally, there’s a 15 page Epilogue that should have been cut completely. Even before the Epilogue, you’ve got two endings. I’m glad you went beyond the first ending to the second ending, but then adding the Epilogue as well was just too much. And the short stories on your webpage are just…sad? I understand another sequel’s coming, but don’t give Jack and D problems before they’ve even settled into their happy ending.

That aside, your writing is amazing. The individual words you choose surprised me in a good way. The sentences you string together flow beautifully. The paragraphs you make are perfect:

With his shorn hair and stubble, D's head looked like it had been sandblasted and weather-stripped. Jack had spent most of his professional life cutting people's faces open, and his surgeon's eye showed him the bones beneath D's skin, although his seemed much closer to the surface than most people's. His jawline was like a flying buttress, his brow like one of the table mesas that lurked on the horizon. His skull was geologic in its architecture. One could only imagine the seismic events and plate tectonics that had gone
on in his life to shape him into this…whatever he was.

The story as a whole is still glowing bright in my mind. I would pretty much read anything else you wrote, no matter what. I’m torn how to grade this book. Logically, looking at all the niggles I had, it should get a B+ or even a B but the book FELT like an A- book, so I’m going to go with my gut.

→ SarahF
Previous article: Spring 2010 Giveaway for Putnam and Riverhead
Next Post: REVIEW: On the Steamy Side by Louisa Edwards