REVIEW: Yours to Keep by Shannon Stacey

Robin read and reviewed your first two books. I agreed with Robin’s first book grade, but skimmed the second one. Hated the heroine, really. Sorry about that. When Angela James sent me Yours to Keep, I confess to being a bit leery of it. But Angie was very excited about it and she’s in my trust network. In fact, the last book that I believe she sent me was the incredible Butterfly Tattoo by Deirdre Knight. (Angie hardly ever recommends her own books to me, I suppose so that I don’t feel like her emails are spamming me). 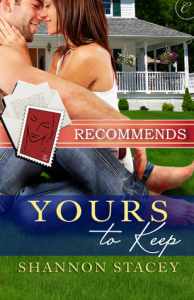 I could tell by the first page that this book was going to work for me. I knew it right away because I have this thing about dialogue. I want the dialogue and characters to feel authentic or real for me but I want the characters to be exaggerated.  By that I mean, I want them to act smarter, be wittier, and quicker with the comebacks.  Real but better?

Of course, after the build up, I have to give an example right?  I give you the first page:

Sean Kowalski flipped the bartender the bird and dropped his duffel on the floor next to an empty stool. “Runs in the family, cousin.”

Since they both stood a hair over six feet, they were able to exchange a quick hug over the bar, and Kevin thumped him on the back. “Damn glad you made it home.”

“Me, too.” Sean sat on the barstool and took a long swig of the foamy beer Kevin put in front of him. “Sorry I missed your wedding. And Joe’s, too.”

“You were getting your ass shot at in Afghanistan. We won’t hold it against you. Much.”

“Still can’t believe you both found women willing to be your Mrs. Kowalskis. What’s wrong with them?”

Kevin flashed him a grin. “It’s the dimples, man. Women can’t resist them. Too bad for you we got ’em from Ma and all you got are the blue eyes from the old man’s side.”

“They do me well enough. How are your parents doing?”

“Good. They’re looking forward to seeing you, and Ma made lasagna for tonight.”

Sean grinned and patted his stomach. “I didn’t stop for lunch so I’ve got plenty of room. There are a lot of things I miss about my mother, God rest her soul, but her cooking isn’t one of them. Aunt Mary, though? Damn, that woman can put a meal together.”

Kevin nodded, then stepped away for a minute to grab a water. “So, you’ve got no job. Gonna mooch food from Ma and bum an apartment from me. The army was supposed to make you a man, not a useless son of a bitch.”

“Twelve years was enough. Don’t know what I want to do now, but I know it’s not more of that.”

I love the term “Mrs. Kowalksis”. That seems like a very guy sort of thing. I also liked the jocularity between Kevin and Sean.  That dialogue really sets the tone for the entire book. Funny, good humored characters with a touch of uncertainty.  Sean’s big conflict arc is that he doesn’t know what he wants to do now that he is out of the military.  It’s not just what he wants to do for a living, but how he wants to live his life.  He hasn’t experienced this kind of freedom in twelve years.

Another mark of really good dialogue is how individualized it is.  In other words, between the two main characters, I would like to be able to tell who is saying what merely by the dialogue itself.  People have different rhythms and mannerisms. Good dialogue exemplifies this.  Sean and the heroine, Emma, speak differently enough that if you read the lines aloud without dialogue tags, I believe I could tell the difference.  Another example ahoy:

“Lady, I’ve never had a fiancée, fake or otherwise,” he said in a low voice that made her knees weaken just a little. “And it’s been a while since I’ve gone on a decent bender, so if I’d asked you to marry me, I’m pretty sure I’d at least remember your face.”

That would have been hard to do. “We’ve never actually met.”

He stopped squinting at her and snorted. “Let me guess—this is some joke my cousins thought would be a funny way to welcome me home? Okay, so…ha ha. I’ve got stuff to do now.”

He started to close the door, but she slapped her hand against it. “I’m a friend of Lisa’s. Your cousin-in-law, I guess she’d be.”

“Mikey’s wife?” He pulled the door open when she nodded. “Maybe we should start this conversation in a different place. Like the beginning.”

She took a deep breath, then blew it out. “My grandmother’s raised me since I was four.”

“Maybe not that far back.”

He shook his head. “Let me get this straight. You told your grandmother that a guy you’ve never met is your boyfriend?”

“I just wanted her to worry less.”

“Maybe she’s right to worry about you.”

He folded his arms across his chest and looked down at her. “You made up an imaginary boyfriend.”

He didn’t even crack a smile. “What do you want from me?”

Worried I’m sharing too much?  Trust me, I haven’t even gotten to the good stuff yet.

Seriously, I read this book while I was waiting in line for the iPad at the Mall of America. I didn’t even notice the line. I kept smiling and then giggling, causing all kinds of looks of consternation around me.

The plot is thus: Emma lives outside of Boston in her grandmother’s home.  Emma owns a successful landscaping business.  Emma is happy in Boston and she’s even happier that her grandmother (who raised her) has moved to Florida to enjoy her retirement. Unfortunately, the grandmother is worried that Emma is too lonely, having no family close by, and keeps making noises that maybe she should give up moving to Florida.  This makes Emma unhappy and thus she invents a fake boyfriend that morphs into a fake fiance and now grandmother is coming to Boston to meet said fiance.

Emma, being good friends with Sean’s counsin to be that fake fiance. It was great because Sean was away serving in Iraq and Afghanistan but now that he is discharged, she can’t use that as an excuse anymore.   After some internal debate, prodding by Lisa, and begging by Emma, Sean is convinced to serve as the fake fiance.  This involves moving in with Emma and yes, sleeping her in bedroom.

“Screw you, Mitch. She’s paying me to do landscaping. The fiancé thing is…whatever. She’ll be sleeping on the couch in the bedroom. I’ll be in the bed. It’s strictly hands-off.”

His brothers would have the betting pool in place by the end of the day, no doubt. “Throw me in for making the whole month. Got no problem taking your money.”

“She’s hot and single. You’re a guy. Sleeping in the same room? You’re as good as half in the sack already.”

What makes this book so funny, beyond the dialogue, is that the joke is on them.  Emma and Sean have to pretend to be the loving couple all of the time, except in the bedroom only Emma and Sean know nothing about each other.  This is highly problematic in the close knit family of the Kowalksi’s where family get togethers are the norm, rather than the exception.

What makes this book stick beyond the funny is the truly endearing aspect of the romance.  When Emma and Sean decide to live to each other, Mitch is right.  They are “half in the sack already”.  But being intimate is something that goes far beyond just the physical interaction.  Emma and Sean really get to know each other and therefore the reader gets to see how and why they fall in love.

Emma  is very type A and she presents Sean with a notebook of all of the details that she think he should know about her.  Sean calls it her “owner’s manual” and refuses to provide anything in response.  This leads to a hilarious dinner scene wherein she cooks something with broccoli and Sean is forced to eat it because her grandmother is at the table.  In response, Sean starts leaving post it notes on Emma’s bathroom mirror.  These little details, like the dialogue, show the individual.

Cat smiled and Sean forced his lips to move into what he hoped was a similar expression. A woman who was sleeping with and living with and planning a future with a man would know he didn’t like broccoli. And it was his own damn fault for laughing off her suggestion he write an owner’s manual of his own.

The store-bought apple pie went a long way toward making him more comfortable but, at the first opportunity, he excused himself. “I need to make a few phone calls, so I’ll leave you ladies to catch up.”

It was a lie but, hell, what was one more? On his way out, he ducked into Emma’s office and grabbed one of the umpteen pads of sticky notes she had scattered on the desk and rummaged around until he found a Sharpie marker.

Once upstairs, he went straight into their shared bathroom. He peeled the top sticky note off the pad and stuck it to the mirror, and then pulled the cap off the Sharpie.

Emma stared at the notes stuck to the mirror, her fingers curled over the edge of the sink. Her face was washed. Hair and teeth brushed. It was time to go out and curl up on the couch and try to sleep.

I hate broccoli. And peas.

The post it note begins to be the way that Sean communicates with Emma about his true dislikes and desires on a regular basis.

I felt like this book had it all: humor, agnst, sexy times.  The one problem I had with it was that there is a romance that develops between the grandmother and the widower and as a secondary romance, it’s a good one because it highlights the romantic arc of the main protagonists.  The problem I had was that I liked Emma and Sean and the Kowalksis so much more that all I wanted to do was spend time with them.  I kept hurrying through the grandmother scenes.  This is my explanation for why I am giving the book an A-.