REVIEW: You Are My Only by Beth Kephart

After my review of Dangerous Neighbors last year, I became quite a fan of yours.  Quite a fan indeed.  It’s rare that I find a literary YA author that I connect with on a writing level, but your writing sits alongside the likes of Catherine Ryan Hyde and others for me.  You have a poetic way with words that I will follow anywhere, and You Are My Only is really a take-off from what I’ve read from you previously. 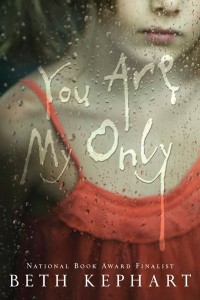 Dangerous Neighbors is a dramatic historical novel, and House of Dance is a lighter contemporary work with shades of drama.  You Are My Only is a departure from these previous reads of yours, but I have to say it’s a fitting one that should impress many readers looking for a unique experience.

Sophie has been homeschooled since she was very young.  Her mother hasn’t let her go to a public school or go out of the house for long stretches of time.  She hasn’t visited relatives the way other kids have instead she visits houses.    That’s what Sophie and her mother do.  They move so often that it’s all Sophie is familiar with.

This life for Sophie isn’t normal and on some level, Sophie knows it.  She knows that her mother’s overprotective nature isn’t healthy.  She knows that the life she lives inside the various houses they move into isn’t typical.  Her mother may help her learn about the importance of complicated history and sciences, but she can’t help her daughter learn about the outside world.

As dangerous as it has been made to be, Sophie has to take the plunge.  She leaves the confines of the blanketed world her mother has created.  Something so simple leads to a momentous change in Sophie’s life: a friendship with her next-door neighbor, Joey, and his aunts.

Fourteen years before Sophie came into the world, Emmy Rane was married and a mother just coming into her twenties.  Her marriage wasn’t the best, but she got through it with the love of her baby.  Her child.  Her only.

It was no surprise that Emmy lost the threads of her sanity when her baby was stolen away from her.  Emmy falls apart.  What’s left of her joy and her thoughts is as mangled and smokey as the train tracks that seem to attract her in her search for her baby.  Her husband Peter is disappointed her.  A mysterious man named Arlen attempts to pick up the parts of herself that are too broken to touch.

When Emmy is later sent away due to psychiatric reasons, she has to save herself and retain the hope that, one day, Baby will be found again.

The story that you spin is so unique in its construction.  From the beginning, the reader is allowed to witness the lives of two individuals who share a deep connection that is broken through impossible circumstances.  There is no mystery to what this connection entails, but instead to what it brings out in the characters as they live their lives.  You Are My Only is not the usual story of a separated parent and child.  It is something much, much more.

The dual perspectives of the two main characters are the first aspect of the novel that really call for attention.  Despite the fact that your distinct literary style shows quite clearly in both view-points, there is a definitive difference between the main characters and their first person voices.  Sophie’s voice is more sensible and grounded, where-as Emmy’s voice is up in the air and flitting from subject to subject.  The way they play off of each other is intriguing, especially when the essential roles of the characters are reversed from the physical ones.

Making Sophie act like the mother trying to find herself while having her physically be the daughter is why she’s so appealing.  There’s something about her that screams discovery.  The way she slowly defies her mother by simply gaining friendship is also a refreshing change of pace in characterization, and Sophie’s character makes a lot of strong connections that create a great web for the story.

Joey, Sophie’s friend, is equally charming and exuberant as a character.  Together the characters make a strong team.  A hint of romance winds throughout the text, but the strength of their relationship is based in their common friendship which is reinforced throughout the book.  Joey himself is very adventurous and propels Sophie to become more open and risk taking herself. Coupled with his aunts, he provides a creative escape for Sophie into a more warm and welcoming home than she’s ever seen.

The simple beauty of the safety of Joey’s family and how it changes and challenges Sophie is the core of her story.  In living with her mother, Sophie is subject to a life of seclusion.  The ability to open herself up to a life that isn’t cold and leeching is one that readers will cheer at the sight of.  As she gains the courage to analyze the skeletons in her mother’s closet, Sophie becomes a character that the reader wants to succeed.

Joey’s “aunts” are other major highlights of the work.  One thing that I appreciate about Miss Cloris and Miss Helen is the subtle relationship.  They are pictured as two loving aunts who are absolutely darling.  They take in the orphaned Joey and treat him like family and provide him – and soon, Sophie – with an excellent environment.  Their relationship is more than what their title implies, and you portray that beautifully.

Emmy is a more complicated character to work with in narration, and her viewpoint doesn’t work on the same level that Sophie’s does.  I appreciated the overall effect of the narration and how it connected with Sophie’s on a subtly thematic level.    The relationship between Autumn and Emmy is what brings a real light to the overall narration.  Autumn is such a boisterous character that’s wrapped in her own mystery, and she allows Emmy to open up in way that is similar to how Joey allowed Sophie to open up.

As much as I loved this connection, I did feel that Emmy’s narration was the weaker of the two.  At times her wavering sanity is hard to connect to, and the overall story is much more grounded in the magic of reality instead of the complicated musings of Emmy’s brain.  It’s also hard to tell if the treatments Emmy receives are truly accurate enough because of the way her narration takes place.  Sophie is a straightforward narrator that suggests honesty, but Emmy is a tougher nut to crack that is almost too elusive at times.

The use of first person present as the narration tense is also risky.  You do that frequently in your novels, but as a reader it can go very badly if the voice or styling of the narration doesn’t hold up well.  Your prose and its flow works very well for this tense, and you make it so easy to escape into it.  There were many moments that I would find myself diving into the simple joys of the description of the novel.

“We’re Joey’s aunts,” Miss Cloris says.  “But that doesn’t mean we’re sisters.  here.  Let me show you something.”  She pushes back from the table and walks across the room.  She pulls a picture from the wall, a pencil drawing, brings it to me, sits down again.

“Time washes over, changes the look of things.  But that’s not the point I was making.  My point was, Miss Helen drew this.  Miss Helen is an artist.  Was when I met her and always has been.  I fell for her Wonderland dioramas.”

I nod, confused, and Miss Cloris’s face gets far away – the look in her eyes, the smile not for me.  “You ever been to Wonderland?” she asks me now.

“Don’t deny yourself, you hear me?”

You Are My Only is a book that could so easily fall into others of its ilk.  It has the makings of a high-end drama that promises teenage angst and romance, but it instead goes the less trodden path.  You use sparse prose, rich characterization, and a simple plot to share a simple connection between two people that may or may not come to fruition.  You end on a note that leaves so much left to be said, yet completes the story in such a timely way.  Minor complaints are just that – minor.  There is a reason I’m a big supporter of your work, and this is why.  My final grade is a solid A-