REVIEW: Written in My Own Heart’s Blood by Diana Gabaldon 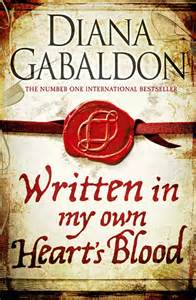 It’s fair to say that reading Outlander however-many-years-ago was what turned me into a romance reader. I had had fitful encounters with the genre before, as a teen, but it was Outlander that made me OBSESSED with historical romance. I still remember searching for books immediately after finishing it that might replicate the experience I had with Outlander, with very mixed results (Catherine Coulter and Woodiwiss’ The Flame and the Flower…shudder). I’ve read before that you reject the romance label for the Outlander series, and I certainly understand why – they’re no more “just” romances than they are “just” fantasy time-travel books. But at the same time any books that contain such an incredibly compelling central love story have to be considered romance on some level.

Written in My Own Heart’s Blood is the eighth entry in the Outlander series, and like a lot of fans of the original book, my feelings about the series have waxed and waned over the years. It’s bad enough that I’ve forgotten whole chunks of books five, six and seven; my memories of all but book one get hazier as the years pass. The central details of some are vivid (Claire and Jamie’s reunion scene in Voyager…sigh), but the surrounding pages (hundreds of pages) are much less so. I really need to re-read the entire series from the start, but that would involve slogging through some of those less-than-compelling entries, and we’re probably talking well over 5,000 (maybe closer to 10,000?) pages at this point, and there’s SO MUCH else to read…maybe I’ll just go refresh myself with some online synopses for now, and hold off the reread for retirement. Anyway…

My main recollection, when I read earlier this year that WiMOHB actually had a publication date, was how angry I was at the ending of the previous book, An Echo in the Bone. I remember very little about AEitB except for how pissed I was about this incident (SPOILERS AHEAD!): Jamie was thought dead (again?!), and Claire was of course grief-stricken, but forced to marry Lord John Grey to protect herself from possible arrest as a rebel spy in Philadelphia, which was still held by the British Army at that point. One drunken night Claire and John consummated their marriage in an act of grief and shared passion for Jamie. Who then showed up, alive, of course, almost immediately afterward. This struck me as both the lowest sort of soap-opera conflict-creating nonsense, and sort of distasteful given John’s orientation and long-standing love for Jamie.

Anyway, Jamie’s return was only one of the cliffhangers that AEitB ended with – the other was the modern (well, relatively) day troubles of Roger and Brianna, whose son Jem was kidnapped and, they believed, taken back through the stones by some crazy guy whose motive I’ve already forgotten. (An online synopsis suggests it has something to do with hidden gold, which I vaguely remember coming up before. Okay, then.)

So it should go without saying that Written in My Own Heart’s Blood begins with a lot of action – there’s Jamie’s joyous return and his quick escape from British forces. But before he escapes he encounters Lord William Ellesmere, who is Jamie’s illegitimate son and John’s stepson (as well as a British officer), and William rather abruptly realizes that he’s Jamie’s bastard rather than the son of an English nobleman, as he’d always thought (based pretty much entirely on the marked resemblance between the two men). The revelation doesn’t go over well.

Meanwhile, Claire is ecstatic that Jamie and his sister Jenny are alive, but she’s got problems. One of them is that she’s got two husbands; another is that she’s got to tell her first husband that she slept with her second husband (Lord John actually takes care of this, in what I thought was a fit of over-sharing; the consequences end up being troublesome if not disastrous for him).

So then there’s the fact that Claire’s first husband has absconded with her second husband (technically, second husband with third husband, actually), and shortly after everyone connected with the British army in Philadelphia appears to be looking for said third husband, up to and including his older brother, Hal Grey, the Duke of Pardloe. Claire’s somewhat unorthodox solution to dealing with Hal is to essentially take him hostage, which she does while treating him for a severe asthma attack.

In the 18th century, we are also following the doings of William, Jamie’s nephew Ian, Ian’s fiancée, the Quaker Rachel, Rachel’s brother Denny and his fiancée, who is Hal’s daughter. And that’s before you even get to the more minor characters or to the business in the 20th century – Brianna and her kids, and various folks who have mysterious designs on their family. Then we have a storyline set in a THIRD time – Roger and his time-traveling ancestor Buck have traveled back through the stones at Craigh na Dun (which are starting to resemble a set of revolving doors, with all the coming and going) to try to find Jem and his kidnapper (who aren’t even there, not having ever actually traveled through the stones). They end up in the wrong time, though, and encounter none other than Brian Fraser, Jamie’s father, having landed in the 1730s, a few years before Brian’s death and before Claire originally traveled back in time (as detailed in the beginning of Outlander).

The preceding paragraphs have crystallized for me the impossibility of writing a coherent synopsis of this book. It would be like 8,000 words and probably wouldn’t make sense. Suffice to say, a lot of stuff happens in WiMOHB. While Claire’s is the only first-person perspective (in keeping with the tradition set by the previous books), we get at least a half-dozen others: Jamie, Ian, Lord John Gray, William, Brianna, Roger. Naturally, some are more compelling than others.

I was surprised to find early on that Brianna’s story in 20th century Scotland was more compelling to me than the stuff going on in 18th century America (though I think in part it was because there was a mystery as to who all was involved in Jem’s kidnapping and what they wanted). I found some of the newer voices more interesting – Ian and William are both intriguing (though Ian’s POV has been represented in probably several books prior to this one; I honestly can’t remember). It’s not that I don’t like Claire and Jamie – I LOVE Claire and Jamie. It’s just nice to hear from the fresher voices (even if in this case the fresher voices have been present for four or more books).

There can be a dissonance involved in switching not just between perspectives but entire centuries; thankfully, Brianna’s chapters and Roger’s chapters are kept pretty much separate from those of the characters in Revolutionary War America. Even then, I sometimes felt like I was being batted around in the middle of the book, when we rapidly (well, rapidly for an 850 page book) switched scenes amongst the various characters involved in the run up to a battle, the battle itself and its aftermath. I think it would have been easier if all of the characters were focused on the battle, but there’s just so much else going on: Jamie’s worried about Claire, Claire’s worried about Jamie, Ian’s going his own stuff going on, Lord John Grey is both worried about William and concerned about his own situation and the appearance of Percy Wainwright, Grey’s former stepbrother, erstwhile lover and general no-goodnik.

The switching perspectives and concerns didn’t bother me exactly (reading the entire five-book Song of Fire and Ice series since I read the last Gabaldon has kept my mind limber for POV changes) but reorientation was required at times. And while, as I say, I liked that Roger’s and Brianna’s sections were kept distinctly separate, I felt a bit of anxiety about what was going on during the hundreds of pages we were away from them. Conversely, when the action finally switched back, I started to wonder what was going on in Ye Olde Revolutionary War America, and to miss the characters there. In some ways WiMOHB is like a couple of books smushed together, and the effect is to make the story feel episodic, but in a weird way, since the episodes are often intertwined (not just within each time period; a lot of Brianna’s actions as the story progresses are informed by what she knows about Roger’s movements).

Even within the book, there were things going on that I just didn’t understand, probably because they involved things ancillary characters had done in previous books, things I had long forgotten about. I could just look these folks up (thanks, Outlander Wiki), and sometimes I did, but sometimes I didn’t really care enough to. It wasn’t that I didn’t care about the characters or the story, it was just that my plate was full of characters and plot and I couldn’t really be bothered to try to figure out why some other random soldier has nefarious plans involving William going back to the last book. I was content to just let the story unfold without worrying about the backstory.

A few quibbles: at one point, there is a scene with four characters, and all of them are time travelers born in different times (though two have traveled to the place they are at together). On the one hand, I find the stuff about other travelers intriguing; on the other hand, it starts to feel a little gimmicky when 18th century Scotland gets overrun with time travelers. Also, the action did start to lag in the last third to quarter of the book; it wasn’t so much that it was boring was that it was quieter than the previous sections and so felt slightly dull in comparison.

To get back to my “episodic” comment, in some ways, this and other recent books in the series strike me as something that resembles old-style serialized writing. The scenes are almost like little (or not so little, depending) set pieces. Some are action-oriented; some advance the story; others seem to be included just as color or because the author researched the subject (if that sounds critical or dismissive, it’s not meant to be; a bit late in the book where Claire performs surgery on a child slave who has been raped and given birth, causing damage to her bladder and other organs, was not connected to the larger story but still very interesting and well done). By their very  nature, and because the book is so long, some parts are going to be more interesting than others. But overall I thought Written in My Own Heart’s Blood was an excellent entry in the series, and left me eager for me. My grade is an A-.