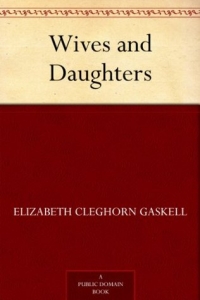 Way back in 2010, when I reviewed my first Elizabeth Gaskell book, Cranford, a few commenters urged me to read Wives and Daughters. I can’t quite explain why it’s taken me quite so long to actually pick the book up, but recently when I read and reviewed Ruth, someone again mentioned this book, and I knew I had to give it a try.

Wives and Daughters was Gaskell’s last book and was in fact unfinished when she died suddenly in 1865; it was completed by a writer named Frederick Greenwood. (The completion is more of a synopsis of what Gaskell intended for the characters; she was very close to finishing it when she died.)

The book is subtitled “An Every-Day Story”, suggesting something modest and commonplace. It’s true that the novel isn’t full of melodrama, but as much as I love melodrama I really enjoyed Wives and Daughters‘ quieter pleasures.

The story’s central character is Molly Gibson, the daughter of a village doctor whose mother died when she was quite young. Molly is thus very attached to her father. Early on in the story Molly is taken to a day event – a sort of picnic – at the local great house. She falls ill and is put to bed by Lady Cuxhaven (one of the daughters of the house) and Mrs. Kirkpatrick, the family’s former governess. Mrs. Kirkpatrick promises to wake Molly in time for her to leave with the family friends who have brought her, but forgets. Molly is distraught at the thought that she may have to spend the night in this strange place and concerned that her father will worry for her. He eventually comes to fetch her, to Molly’s relief.

The incident, though seemingly minor, is one of those formative events that shape our childhoods and relationships. Molly retains a sort of visceral dislike of the manor house and her attachment to her father remains strong throughout her childhood. Dr. Gibson is a gruff but loving parent. He takes in apprentices who live in the Gibson house and train with him for medical careers. When Molly is about 17, the attachment of one of the students to Molly, though unknown to her, spurs several events that change the Gibsons’ lives.

Dr. Gibson sends Molly away to stay with another local family, the Hamleys, in order to keep her away from his amorous apprentice. Mrs. Hamley is an invalid who has long expressed an interest in having Molly’s company; with two sons, she appreciates the opportunity to have a daughter figure around. Indeed, though Molly is at first upset to leave her father, she quickly acclimates to Hamley Hall and her role as surrogate daughter to both Squire and Mrs. Hamley. The Hamley are not as wealthy as their neighbors the Cumnors (of the great house previously mentioned), but Squire Hamley takes great pride in how far back the family title goes.

The two Hamley sons, Osborne and Roger, are away at school, but Molly gets vivid impressions of both from the proud parents. Osborne is the eldest and clear favorite; his parents expect brilliant things from him. Roger is considered more stolid and “slower.” Molly ends up meeting Roger first when he makes a trip home, and though he’s not particularly handsome, she comes to like him for his lively and open demeanor and his enthusiasm for the natural world.

It’s while Molly is away at Hamley Hall that her father decides he should marry again, after many years of widowerhood. His reasoning is that Molly needs a mother, in part to prevent unwanted attachments of the kind that he feels she narrowly avoided. (I wasn’t clear on quite why he was so worried, since Molly never evinces that slightest interest in or even recognition of her father’s apprentice. I also felt like it was kind of late in the game, considering that Molly was nearly grown, for him to be concerned about a female influence on his daughter.)

Lady Cumnor promotes the very same Mrs. Kirkpatrick who forgot to wake Molly all those years before to Dr. Gibson as a possible match. Mrs. Kirkpatrick is the widow of a Scottish pastor, a former governess, and currently the headmistress of a not-very-successful school. She accepts Dr. Gibson’s proposal of marriage as an escape from a life she doesn’t particularly care for, and a step up in the world.

Molly, however, is devastated by her father’s marriage announcement. Both the prospect of change and the notion that she’s being replaced in her father’s life leaves her distraught. However, she resolves to put on a good face and in fact is at least happy to discover she will have an instant sister in Mrs. Kirkpatrick’s daughter Cynthia. Cynthia is at school in France and her mother does not seem to prioritize her joining her new family, though Cynthia does eventually show up. She turns out to be very different from Molly, but they become fast friends anyway. The fact that neither of them seem to care much for the new Mrs. Gibson (nee Kirkpatrick) bonds them. Cynthia is firm in her belief that she herself is not very good, but she admires Molly’s goodness.

Events at Hamley Hall devolve when tragedy strikes and a secret that Molly wishes she hadn’t overheard causes a strain between parent and son. Mrs. Gibson wastes no time trying to promote a match between her daughter and first Osborne Hamley and then Roger Hamley. Roger ends up smitten with Cynthia, and Molly finds herself bothered by this, though she had previously believed that she favored the more cultured and delicate Osborne to ruddy Roger. Then there’s the Cumnors’ land agent, Mr. Preston, who hangs around making everyone feel uncomfortable and being vaguely villainous.

The characterization is what really makes Wives and Daughters such a rich and compelling story. Osborne, for instance, is not a bad fellow, but when he’s described as “…too indolent to keep an unassisted conscience”, the observation feels spot-on. Cynthia has secrets that remain hidden for much of the book (it’s clear they have something to do with the oily Mr. Preston). She is an intriguing character; not as “bad” as she may breezily admit to being, but undeniably somewhat selfish and callous about the effect that her beauty and charm have on the people (especially men) around her.

Molly is sometimes in danger of being a bit of a goody-two-shoes, but she does have dimension. For one thing, her dislike of her stepmother (which is totally understandable) is something she struggles with. She never quite gets over yearning for the time when it was just her and her father.

Things get complicated for Molly when village gossip turns on her; she’s believed to be having secret assignations. Here, Gaskill shows us the darker side of village life, where even the appearance of impropriety results in swift punishment for young women.

Wives and Daughters is both “an everyday story”, and a very specific, rich depiction of the interwoven lives of people in a small village. None of the characters are all good or all bad, though several could use improvement. But they are the sort of everyday “bad” – people who self-justify their pettiness or lack of empathy. The second Mrs. Gibson is often comical in her self-absorption and attempts to manipulate her daughter, step-daughter and husband.

Probably the only real criticism I have of the book is a reflection of the time it was written. Roger Hamley, now a naturalist, makes a trip to Africa. The opinions the characters express towards Africans made me cringe, as in this instance:

“Possible, but not probable, I should say,” replied Mr. Gibson. “Black folk are not remarkable for their powers of reasoning, I believe, so that they haven’t much chance of altering his opinion by argument, even if they understood each other’s language; and certainly if he shares my taste, their peculiarity of complexion will only make him appreciate white skins the more.”

I can put it into context, but expressions like the above one (there are several in the book) still leave a bad taste in my mouth.

But overall, this is a beautifully told story, and I give it an A-.