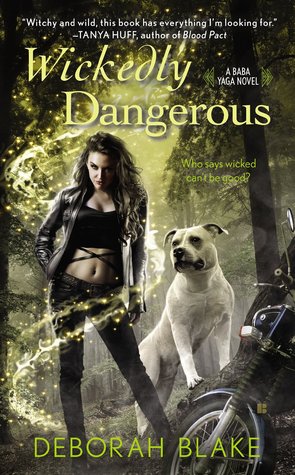 I read your author’s bio first and started out very intrigued by your history of writing seven nonfiction books on modern witchcraft and your work as an energy healer. But I asked myself how that would translate into a paranormal romance – would the book be full of lectures and long, boring explanations? Instead, I was delighted to discover that your life-long immersion in the study of witchcraft and its history created an engaging world full of thoughtful, clever details and a charmingly dangerous heroine. I loved Wickedly Dangerous almost without reservation. It’s so smart –and so funny! Your novel is tightly plotted, with great fidelity to the Baba Yaga stories from Russian folklore that inspired the book. While I do hesitate to call Wickedly Dangerous a romance novel in the current sense, since it stays pretty sweet and innocent throughout, it’s a really satisfying fantasy story that has such a confident sense of play, pleasure, and the goodness of love throughout.

The book opens in the perspective of small town, New England sheriff Liam McClellan, who is dealing with a rash of child abductions, his personal traumas, and a mayor eager to give him the boot. Liam has had no luck finding the missing children, which hurts more than his pride – he loves the people of Clearwater County, and his own baby daughter died and his grief-deranged wife left only a few years prior, so he is extra sensitive to the plight of the panicked families left behind.

With the law helpless to find their kids, one of the affected families calls on a much older, more elemental power to find their missing child: the old Russian witch, Baba Yaga. And once you invite in the Baba Yaga’s current incarnation, a semi-immortal botanist who goes by the name Dr. Barbara Yager, she ain’t leaving till you’ve paid her price and she’s gotten the job done. This is an old kind of debt, one with real consequences, but luckily Baba has the old sense of honor as well, the kind that insists on putting everything right, and maybe even making things better.

When the sheriff comes knocking on Baba’s Airstream trailer door (I guess a hut on chicken legs would stand out a bit more glaringly than a gleaming vintage trailer), it seems at first that he’ll stand in her way, since he’s Mr. Upright Citizen and she’s a bit of a cut-corners, whisper-an-incantation, break-into-an-office kind of girl.

But this fierce, smart woman who has lasted centuries with only the rough affection of her dog Chudo-Yudo (really, a glamoured dragon who likes to pretend he really chews on bones and couldn’t just incinerate them), and the occasional visit from otherworldly lovers, falls hard and fast for this simple, honest man of Clearwater County. “Hot Sheriff” isn’t exactly a usual image (and to be honest, I am still trying hard to picture that), but he is truly a good man who is deeply kind and rooted in his community. He doesn’t attract her because he’s dangerous or toys cruelly with her, but because he’s a respite from the predominance of those traits in the world.

I can’t even put into words how much I love the charm and integrity of your vision of Baba Yaga. Coming off of Deborah Harkness’s super weak witch in A Discovery of Witches, I was itching for a smart, tough lady with a great heart and witty repartee to pull the reputation of witches back up from the depths in which they were languishing. Baba is a well-rounded character who exists fully on her own. She has friendships going back centuries with The Riders, three warriors called Day, Night, and Sun, and I eagerly read the scenes of easy fun she has with them and Chudo-Yudo. I also really enjoyed the Airstream trailer’s independent sense of magical helpfulness, which sometimes meant producing refrigerators full of pies for days on end. This story is so full of tiny, well-thought out details that made the magic feel extremely real, even matter-of-fact, because the rules of the world are so clear and water-tight.

Your creation of this universe is both dead-pan and sincere: Baba gets to the Otherwold by ducking into her closet, and her roots in a feudal universe means she relishes a good brawl. But under the magic and humor are real concerns. Old stories about magic involve drawing power from the earth. In Wickedly Dangerous, a love for nature is a strong undercurrent both to the story and to Baba’s character. As it turns out, the leasing of agricultural land for fracking, the controversial method of shale oil extraction that is energy intensive and pollutes water sources, both divides the community in Clearwater and damages the wall between worlds. The Baba Yaga is the link between this world and the Other World, and her ability to keep the balance is now under threat. It turns out that the children are disappearing because a water spirit, called a rusalka, has been violating the laws of both lands, accumulating magic in exchange for scooping up human children for barren immortals. The rusalka is a nature spirit, and human carelessness with our water lead to her malevolent revenge on innocent children.

As the plot ramps up, Baba and Sherriff McClellen try separately to solve the mystery of the missing children while the rusalka, who has infiltrated the fracking company in glamorous disguise under the name Maya, successfully undermines both of them in the community. Children keep vanishing, the fracking company is grabbing more and more land, and no-one trusts the ineffective sheriff or the hippie in the trailer. Finally, Baba and Liam decide to band together, since they’ve got nothing to lose, which leads to moments of shared empathy for the vulnerable and innocent creatures of the world, as well as the discovery of their growing mutual lust and affection. This closeness also allows the sheriff to discover that his sexy herbalist adds potions to her lotions, a discovery he takes rather well, all things considered. They explore each other’s depths as Liam follows his beloved Baba into the Other World, a beautiful, but not-quite-alive mirror vision run by a powerful, capricious queen who rules over everything nonhuman, even over the Baba Yaga.

While Wickedly Dangerous is the first of a series, it’s not a trilogy in the sense of a single story told over three volumes. Instead, in each book, we’ll learn the story of one of the three Baba Yagas who each maintain the veil between the worlds. In this first book, once Baba and Liam have restored rightness to both worlds in a series of clever resolutions that bring peace to the suffering and suffering to the wicked, and they’ve have figured out how they’re going to make a go of it as a heroic nomad witch and humble officer of the law, their story is resolved. It’s very satisfying, and every hint and loose end laid out at the beginning is neatly tied up.

While I truly enjoyed the book, I have some qualms about one of Baba’s solutions, which sends unwanted human children, seemingly without consulting them, to the lonely fairies and giants who want to raise and love them in the Other World. It seemed like a very tone deaf solution and unnecessary, since I didn’t particularly care that the magical beings didn’t have children to love, and I definitely cared that human children would be sent to the fairy world without knowing what that meant for their lives and futures. But everything else I thought was absolutely brilliant, thoughtful, kind, and incredibly fun to read. I loved nestling into this world and enjoying the company of good people and sardonic dragons-in-disguise. I can’t wait to read the sequel, and I really hope Barbara Yager and Liam McClellan make some guest appearances in the novels that follow up this wonderful beginning to a new series. A-

[themify_box style=”blue map rounded shadow”]
Marthine thinks you shouldn’t raise children on Oz, Narnia, and Shakespeare unless you are prepared for a love of magic and mystery to root deeply in your offspring. Marthine devoured sci-fi and fantasy as a kid, grew out of it for a while, and has grown back into it. In college, she called it “magical realism,” and now she calls it fun. Find her on Twitter at @MSatris and online at marthinesatris.com. When not writing, she edits for a literary press and teaches English to college freshmen.[/themify_box]