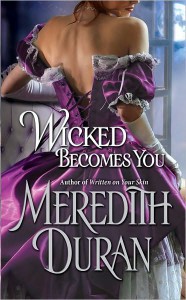 Since publishing your first romance in 2008, you have quickly become one of my favorite and most dependable authors; I have not given any of your first three books a grade lower than an A-. So I looked forward to Wicked Becomes You with a fair amount of anticipation.

The book opens in 1886 with a prologue that takes place at the funeral of Richard Maudsley; Richard had been stabbed after venturing into a casino on a lark. His best friend, Alex, feels guilty because he had refused to accompany Richard; Alex is an aristocrat but on his way to being a self-made businessman  (he is a younger son)  and he is dedicated to his work. He also feels guilty because before Richard died, the two men had quarreled over Richard’s sister, Gwen; Richard was suspicious of Alex’s attraction to Gwen. At the funeral, Alex returns Richard’s ring to Gwen, a precious remembrance of her last living family member (her parents are already dead).

Gwen was the golden girl of her family; her parents, who had climbed up socially from a background in trade, had hopes that Gwen would make a brilliant marriage. Standing with Gwen in the chapel, Alex remembers his promise to Richard that he would see Gwen settled. It’s a promise that he has some ambivalence about, but all the same  he feels obligated to try.

The action then moves forward four years, to another church; it’s Gwen’s wedding day and she’s about to get jilted – this time at the altar – for the second time. Alex is there to witness her humiliation (along with the rest of the ton, most of whom regard Gwen with fondness because she’s just so darn nice). Alex generally stays out of London; his business concerns take him around the world, and he’s only stopped in to see his older brother, the Earl of Weston, to find out why he sold a piece of family property. Alex doesn’t care about the property, but he does care about his family, and he cannot resist his twin sisters’ pleas to get to the bottom of the sale; he suspects the earl may be having money problems. So it’s only chance that Alex is there in the pew when Gwen’s prospective groom literally bolts, and also that he’s at Gwen’s home later participating in  a powwow to determine What To Do About Poor Gwen, while the lady herself is upstairs in bed, distraught and enraged.

Gwen had not loved her fiance, Thomas, but she had more or less believed his assurances that he loved her; she knew he needed her money, at least. Gwen longs for a family of her own; at a young age her parents had sent her to live with the aristocratic but slightly-down-at-heel Beechams, in the hopes of giving her some town polish. Now her parents and only sibling are dead, and the people she’s lived with for most of her life, while not particularly unkind or abusive, are nothing but paid guardians. Lying in her bed,  Gwen feels herself break free; she realizes that all her attempts to be good and proper and perfect have earned her nothing but the degradation of being jilted twice and the pity of the ton, and she’s still as alone as ever. She resolves that since no good has come from being good, she’s going to try being bad.

Writing this out, Gwen’s resolution strikes me as childish and silly, but you never make it feel that way in the story – I empathized with Gwen enormously and actually mentally cheered for her when she essentially said, “screw ’em” and decided that she would do what she wanted to from there on out.

One thing she wants, she decides, is to get back her brother’s ring, which she had given to Thomas as a token of affection. But Thomas has apparently fled to Paris, and so Gwen determines that she will follow him there, demand her ring back, and give Thomas a piece of her mind while she’s at it. To achieve this goal, she has to face up to the disapproval of those concerned about her – namely her foster parents and Alex’s twin sisters, Caroline and Belinda, who are her closest friends. Alex views the “new” Gwen with some confusion which he masks with an infuriating, condescending amusement, as when he considers Gwen’s slightly manic behavior after the jilting:

Really, somebody needed to cast a trophy for her. In Recognition of Her Tireless Dedication to Utterly Groundless Good Cheer.

Alex and Gwen meet up again in Paris; she’s chasing Thomas and he’s trying to find out more about Rollo Barrington, the mysterious stranger who has purchased the family property that Alex is trying to buy back. Alex witnesses Gwen’s nascent attempts at being daring, and they clash a bit over their differing views on responsibility, obligation and freedom.

From Paris, the book turns into a sort of road  story. I generally really like road  romances (and they seem to be one of the more popular romance plot conventions), but I did have some issues with this portion of the book. Alex accepts Gwen’s help in unraveling what is going on with Rollo Barrington (after Barrington takes a shine to Gwen). Alex’s willingness to use Gwen in this manner struck me as contrived and not true to his character. Much as he tries to hide it, Alex is a caretaker, and he takes his duty to Gwen seriously. It doesn’t make sense, exactly, that he would go from wanting to protect Gwen and watch over her to using her as bait in a situation that he senses is not entirely safe.

Honestly, the entire subplot involving  Barrington and his buying up of property felt muddled and a bit pointless. It only really served as a device to bring Alex and Gwen together (and allow Gwen to play Alex’s mistress, which gave them much more freedom to be alone together than they otherwise would’ve had). That’s okay, but I felt that maybe more time was spent on the subplot than needed to be spent on something that had no real significance to the story otherwise. I also felt that the resolution was anti-climatic and a bit confusing.

I like the humor in your writing, which is especially evident  from Gwen as she begins to break free of the bonds of perfection. Here, musing on her commitment to knit sweaters for an orphanage:

Ten sweaters in a month!

Gwen was not a loom!

And then there is her indignant letter to her erstwhile fiance, which includes uncharacteristic (up to this point) digs at his lack of funds:

Good luck with the roof at Pennington Grange, by the way. I will hope it does not rain too much this season.

I liked Gwen a lot – she is a bit unformed at the start of the book, having been trained to be good and virtuous and unobjectionable, which along with her great fortune, is expected to net her an aristocratic husband. She doesn’t really know herself, and in the course of the book she grows up and finds some balance between virtue and authenticity.

Alex is an appealing if not entirely original hero – he’s a younger son of an aristrocratic family, chafing under the weight of expectation that come with his position. His attitude is given psychological depth by the circumstances of his youth; he had been afflicted with terrible childhood asthma, which eventually led his parents to banish him alone to a remote country house, so as to avoid any excitement that might trigger an attack. Alex still harbors a great deal of resentment towards his dead parents for the stifling restrictions they placed on him as a child and towards his siblings, for continuing to treat him as fragile although he has long since proved that he is anything but. I thought this aspect of the story was quite intriguing; I wish that it had been developed a touch more. Perhaps Alex needed to have a discussion with his brother and sisters to bring some closure to issues that honestly did seem to be having a continuing psychological effect on him as an adult.

There has always been an unspoken attraction between Gwen and Alex; as well, they share the connection of loving and mourning Richard. The conflict between the two of them is no less poignant for being rather basic: Alex’s lonely childhood makes him wary of connections, whereas Gwen’s makes her long for them. Alex has farther to go, in a sense, because he has to learn that love and concern for others do not have to be fetters. Gwen needs to learn to let go and not always feel that she has to be perfect in order to be worthy of love.

I did notice, particularly early on, a few possible anachronisms – in his meeting with Gerard, Alex tells his brother that he shouldn’t get so upset; he’s liable to give himself an aneurysm. Later in the same scene, Alex thinks to himself that Gerard is acting like the “schoolyard bully” he once was. I have no concrete knowledge of whether “you’ll give yourself an aneurysm” was a phrase in usage in the 19th century (I more often see “apoplexy”, which isn’t exactly the same thing, medically, but I think conveys the same idea). I also doubt that “schoolyard bully” (or schoolyards, for that matter) would have been familiar to 19th century English aristocrats. Late in the book Gwen uses the word “conned”, which I also question being in common usage, particularly by someone of her background.

These anachronisms were minor in the larger scheme of things and may have been in fact more noticeable because the setting otherwise did feel authentic. Once I notice such things, though, I feel compelled to mention them (if only so someone can correct me on whether they are in fact anachronisms!).

Despite my quibbles with certain aspects of the plot, Wicked Becomes You was definitely another successful story for me. My grade is an A-.

This is a mass market published by Simon & Schuster, a member of the Agency 5. For some reason I cannot find any S&S books at Sony and few at Kobobooks.