REVIEW: What the Librarian Did by Karina Bliss 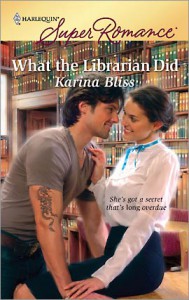 I hope that is your real name. I love it.   Miss Bliss.   Has a very naughty sound to it.   In any event, it wasn’t your name that prompted me to pick up this title. Instead it was a combination of things.   First, an excerpt of your book, Mr. Imperfect appeared at the end of one of the other Superromances I had read, maybe by Molly O’Keefe, maybe by Helen Brenna. I can’t recall as I type up this review.   I enjoyed the excerpt and bought the book and had fun reading the book but you had only a few digital backlist titles and I read them and promptly forgot your name.   Until I saw a blog post at Wendy’s about this librarian book.   I recalled your   name and decided I had to read this librarian story.

I knew right away I was going to enjoy it.   It opened with the heroine and librarian, Rachel Robinson, tending the university library.   If she’s a stereotypical librarian, I wouldn’t know.   I’m not even sure what the librarian stereotypes are.   But if funny, smart mouthed, kind, with a love for vintage clothes are typical librarians, I need to hang out with them more.

A student, dressed in purple boots and looking big, masculine and a little wild shows up in her library. Rachel has no idea who the latest student is.   She knows that he is older and appears arrogant and looks at her as “as if she were part of a female buffet. She got the impression he was already very full but might possibly squeeze in dessert-‘if it was handed to him on a plate.”    She soon finds out that he is someone famous, a guitarist in a band that “did well”.

Devin Freedman had been lead guitarist and song writer for one of the most popular rock bands of the last couple of decades.   Almost two years ago, Devin collapsed on stage due to drug usage.   His doctor has told Devin that his current lifestyle was going to kill him.   Devin had had enough. Enough of his brother, the lead singer of the band, enough of the band lifestyle, enough of trying to hold the band together when his brother was doing everything to tear it apart and nothing to help Devin stay alive. So Devin walked away and the band dissolved.

Devin is arrogant. He has, as Beyonce would sing, a big ego and he has good reason for it.   He has lived as if he were at the center of a small universe where everyone and everything existed to revolve around him.   It would be hard not to have a big ego, but at the point in his life, he is a curious and fascinating mix of self assuredness and bravado.

"Your mouth doesn't fit your profession," he explained. "It's like seeing something X-rated on the cartoon network."

He didn't think to censor himself because he'd been a rock star for seventeen years and never had to. And got a sharp reminder he was no longer in that world when she shut the door in his face.

"Lucky the librarian fantasy never made my top ten," he told the door.

Rachel has not been living a pale shadow of a life, sleeping in a cold virginal bed awaiting her prince charming. She has a successful and rewarding career, friendships and, yes, even boyfriends. But her life isn’t perfect. Rachel made a hard decision early in her life to give up her baby for adoption when she was a pregnant teen.   It was the one decision that Rachel is sure was right despite the lasting emotional scarring that it has had on her psyche.   The rightness of this decision comes into question when Rachel discovers that her baby is now a teen and enrolled at her college.

This is no coincidence. Mark came to this college with the express intent of looking for his birth mother.   He knows that she is 34 years of age and is a faculty member.   He never once considers Rachel because she doesn’t look thirty four.   Most people mistake her for someone much younger.   This gives Rachel an opportunity to get to know Mark and have him get to know her without mucking it up with the adoption issue.   It’s not the best decision Rachel makes.   In fact, the situation readily spirals out of her control.

Rachel is all about control. In fact, her position as a librarian makes perfect sense.  She likes things orderly. She likes to be the one to put them in order, control their outcome and arrangement. She doesn’t have that control with Devin, nor does she have that control with her son. And giving up control, losing herself in someone else, might just be beyond her capability.

She chooses men who she cannot possibly love to have relationships with, knowing that they will inevitably end.   Devin, after a run in with Rachel’s latest ex-boyfriend, calls Rachel “Heartbreaker” and it becomes his nickname for her throughout the book.   But the nickname is more than just an affectionate term.   The term becomes almost a gauge of the health of their relationship. At first, Rachel wants nothing to do with Devin. He’s too arrogant, too full of himself. Devin finds Rachel and her x-rated mouth a well needed distraction in his life. And she’s the one person that seems to look at Devin “without deference or sympathy.”

Rachel and Devin’s relationship is so authentic. Devin’s past is part of the conflict in a real way but does not overshadow the story. He feels like he is not a good risk, not strong enough to be relied upon. But when met with the most important challenge of his life, he rises up to meet it. While it might be a slight spoiler, I had to share a quote from the book that I found incredibly romantic.

All his trials had been preparation, strengthening him to become a man capable of loving a woman who so deserved to be loved-‘and who might always hold something back.

This is a nuanced romance and Rachel and Devin are vibrant characters. It is easy to see how the two of them fit together as puzzle pieces; both quirky and individual, both with their weaknesses and fears; both with the strong capacity for love. It’s a bit of a tear jerker toward the end, but the emotional aspects of it are well balanced with humor and strong dialogue. I can’t recommend this book highly enough. A-