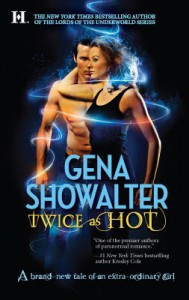 I read Playing With Fire when it came out in 2006 and enjoyed it, enough to hope that there would be a sequel. I realize that the book was subtitled Tales of an Extraordinary Girl, and wasn’t sure how much mileage you’d get out of a single character romance. I also didn’t think that it would take FOUR YEARS for a sequel to show up. Please note: it was worth the wait.

Belle Jamison’s power over the four elements wasn’t a welcome gift; rather it was a surprise slipped into her latte by a scientist determined to see if his formula would work. It did, and now that Belle has her powers, she’s working with the good guys (PSI, or Paranormal Studies and Investigations) to catch scrims (supernatural criminals, of course) with her gorgeous hunk of a man, Rome Masters. Belle is planning her wedding, working as an agent, and trying to figure out what’s going on with her friends when her already crazy world is nearly blown to bits: While out on a mission, Rome has all of his memories of his life with Belle stolen. It’s up to Belle to make Rome remember her, keep Rome’s ex-wife from winning him back, catch the bad guys, plan her wedding and save the day.

This book is written like a graphic novel, without the graphics. It’s a superhero cartoon on the written page, with hilarious, even borderline ridiculous, references like the “nighty-night cocktail” (knockout drug), OASS (Observation and Application of Supernatural Studies – the bad guys, hah), and nicknames like Pretty Boy and Memory Man. It’s written in first person, from Belle’s point of view, but it works because of the verve, sarcasm and winning demeanor that is Belle herself. She may have superpowers, but Belle is in no way a Mary Sue. All of her thoughts, feelings and emotions are on display since the reader is in her head. Nothing feels disjointed, clunky or like an info dump; the first person works here as streamlined storytelling, and Belle’s voice clearly comes through in every description, scene and dialogue exchange. I was pleasantly surprised that I could really feel emotions (both sexual and non-sexual) and experience the chemistry between Belle and Rome. The book is fast-paced and the dialogue is a lot of fun, like this exchange between Belle and Cody, another agent:

“All right. Hop a flight, but stay in contact with me. I want to know what you know, when you know it. I’ll expect daily updates,” I added so that he couldn’t feign ignorance later.

He saluted me, the smart-ass. “Aye-aye, Captain. That was my plan, anyway. John and I already talked.”

Of course they had. John might have told me I was in charge of this case – to keep me from threatening to quit, again, I’m sure – but I knew the truth. Even though I held the title of Special Agent in Charge, Cody and Rome were the ones calling the shots. In John’s eyes, at least. Still, I planned to do things my way.

Belle wants to take charge of something, and prove herself to pretty much everyone around her; partly because she doesn’t really believe in herself. While this may be a fun, light story, Belle experiences plenty of growth and really takes the time to question and examine her friends, her lover and herself.

Because there is such a cartoonish quality to the worldbuilding, the book could have easily veered into the ridiculous. But every time there was a superhero fight or any sort of action it felt real, people were hurt (both mentally and physically), there were repercussions and fallout. This line from Pixar’s The Incredibles kept coming to mind (in Holly Hunter’s voice, please):

Remember the bad guys on the shows you used to watch on Saturday mornings? Well, these guys aren’t like those guys. They won’t exercise restraint because you are children. They will kill you if they get the chance. Do not give them that chance.

Playing with Fire was fun, but Twice as Hot was so much more in terms of character growth, emotion and intensity. I’m pleased that Belle and Rome came back for a second round. A-.

This book can be purchased at Amazon, Kindle, or other retailers although I can’t seem to find any buy links at Harlequin, Fictionwise, etc. ??.