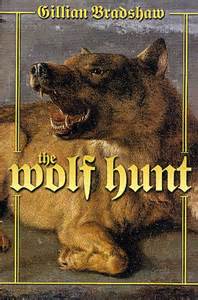 Betrayal, love, and lycanthropy in the time of the Crusades

When Marie Penthièvre of Chalendrey is abducted from her Norman priory and taken to Brittany’s court, she vows never to dishonor her family’s ties by marrying a Breton brute. There is only one man who might change her mind: Tiarnán of Talensac, a handsome, skilled, and noble knight indeed. But Tiarnán does not love her, and when he marries a slip of a girl instead, Marie vows to become a nun as soon as she is able.

But Tiarnán has a secret, and that slip of a girl betrays him once she learns of it. When Tiarnán disappears and is presumed dead, his widow marries his one time rival and assumes title to his land, which steadily begins to decline under her unskilled, merciless rule. Marie knows something is wrong, and only she is clear headed enough to rescue Tiarnán and return him to his rightful status. But can she do so before it is too late?

“The Wolf Hunt” is recommended whenever your name comes up at DA. I had bought a copy at the same time I got “Island of Ghosts,” but it just took me a while to have the time to savor it.

First and foremost, the book is much more historical fiction with a romantic thread than it is a traditional romance. I think readers who adjust their expectations to that will be able to sit and enjoy it for what it is rather than looking for it to be what it isn’t.

It starts out with a normal medieval world of knights, lords, ladies, peasants, outlaws and clergy. There is some feudal hanky panky of alliances which forms the backbone for why Marie enters this society and a quick brush up on the fact that France at this time was not the country we know today will probably help readers get their feet under them. The timeframe isn’t that far removed from pre-Christian beliefs which sit easily on the peasantry and slightly less so on their betters but there seems to be nothing out of the ordinary. At first that is. Then a whisper of this and a smattering of that hint that something else is going on.

The book is based on old Breton lais, or poems, and several parts of it take on the form of a story within a story. A court attendant relays the tragic, ugly tale behind an outlaw in the formal style of oral storytelling, with the cadence and rhythm with which one would expect to be entertained on a long evening before the fire. Meanwhile the revelation of Tiarnán’s true nature to Eline reminded me of other tales such as the Greek myth of Cupid and Psyche in which the heroine begs to know her lover’s true identity and for love of her he unwisely reveals it.

Most romances immediately introduce our romantic leads and show the readers how their feelings for each other grow and develop. Even though the immediate relationship between Marie and Tiarnán is practically non-existent, there are still – initially hints and later in more depth – signs that they think of the other, wonder what happened to the other and are beginning to feel more. Okay, the thinking and wondering starts with Marie who is immediately attracted to Tiarnán while he’s still fixated on a pretty face but she doesn’t spend the whole book mooning over him and angsting about him. She’s got more sense and kindness for his bride than that. He, on the other hand, doesn’t begin to see her or feel for her that way until after his betrayal when at last, the light breaks through and he can contrast her with Eline the Weak.

So if the romance isn’t front and center then what’s the meat of the story? At first it’s medieval life, that’s what. This is a much smaller world of village life with duties owed the landholder who in turn owes his lord certain obligations, who himself owes a distant King loyalty. These people think in terms of saints’ days and daily hours of the Church. Serfs owe so many days of yearly work to their lords, no one wants the Church to get a whiff of paganism left over from before Christianity – though offerings left in the forest are common – and Marie is amazed that she gets the chance to see Paris although it takes a long slog to get there. It’s also a place where the people of Brittany and those of Normandy eye each other warily and are just as often more at odds with each other as with the English. “Courtly love” is the new rage but it’s overlaid on a world which can turn brutal in the space of a heartbeat despite all the trappings of chivalry.

What else is it? It’s a thinking person’s bisclavret or werewolf tale. Tiarnán’s experience delves into questions of humanity, loss and honor. What does it mean to be human and is this better than the chance to experience life with different senses, wants and desires? I hadn’t read any shifter books in a long time but this rendition feels more realistic to me. What Tiarnán goes through isn’t easy and more than once could have proved fatal. It also makes me wonder, when I’m looking at my feline overlords, what they’re thinking back. When all is restored, Tiarnán sees that his “jaunt gone horribly wrong” didn’t just affect him as evidenced by the sufferings his people endured when he was thought dead.

The book is filled with wonderfully drawn characters and complex relationships.

Marie arrives at the Breton court loudly announcing her loyalties only to discover that they’re … actually nice to her here. Used to being ignored by her crusading father and brother, this natural affection on the part of complete strangers throws her at first. Watching her emerge from her cocoon of hurt to flourish and be admired for her strength of will is a major delight of the story.

In his human form,Tiarnán is a man of honor and even as a wolf he still manages to exhibit the same. He’s a good landowner who obviously cares for his tenants and serfs as well as a fierce fighter for his Duke. True he doesn’t initially see who really loves him but his relationship with Eline was already in the works before he encounters Marie. It was also fascinating to watch him finally fall for Marie before he could act on that yet swiftly remedy this once he could.

I was all prepared to hate Eline for what she chose to do but honestly, initially she’s got some good period reasons behind her actions. Even her lover isn’t truly evil, just weak and desperate for her love. Later they turn dishonorable but by then the guilt was coming home to roost and they’ll probably muck up their next chance as thoroughly as they did this one.

Duke Hoel and his Duchess Havoise are unexpected treasures. I was expecting an alpha Lord and haughty Lady but instead got a temperate man who thinks before he acts and who adores his practical and strong wife. Their marriage will hopefully serve as blueprint for Tiarnán and Marie now that he’s got his head out of his a-s. One of Marie’s courtly suitors, Tiher, also proved to be a surprise and I can only hope that some woman will eventually see the worth behind his frog-faced smile.

I think the description of this book as a love story rather than a romance is accurate. For a large portion of the book, characters long for someone who is (at the moment) out of their reach. Marie knows she feels more for Tiarnán than any other knight yet tries to accept his marriage and be happy for him and Eline. Later Tiarnán realizes Marie’s true feelings and a bit of courtly love gets turned on its head as he yearns for her and what he’s afraid will never be. There is enough detail to firmly ground the book as a medieval without it getting too icky and the characters never seemed like modern people in wimples and armor. Tiarnán’s experiences in his altered state showed his conflict at choosing one form over another while also exposing the danger he risks for himself and others with his indulgence. It’s a story that makes me think even as it draws me into a distant world that becomes immediate and real. A-

All right, DA readers. Which Bradshaw book should I read next?

→ Jayne
Previous article: Monday News: The Hugos, weekly SFF serials, the wisdom of groups, and women’s book clubs
Next Post: Back to the Books