REVIEW: The Vanishing Half by Brit Bennett

I can’t name any one reason why I picked up your novel, The Vanishing Half. Part of it was surely its omnipresence on my Goodreads stream. Part of it was all the praise it’s garnered, which includes appearing on the National Book Award’s finalist longlist, being named one of the top ten books of the year by both the New York Times and the Washington Post, and winning the Goodreads Choice Award for Historical Fiction. Part of it was that it is a huge bestseller. 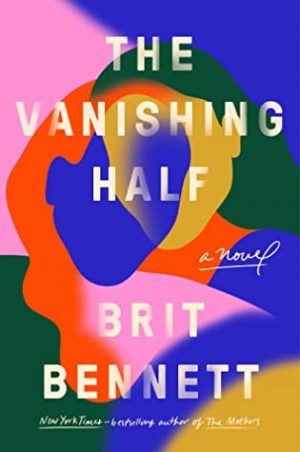 The book begins in 1968, when Desiree Vignes returns to her hometown of Mallard, Louisiana with a dark-skinned (“blue-black”) girl in tow. Desiree is Black but light-skinned, and her skin color is a product of Mallard’s purpose. Founded 120 years earlier, in 1848, the town was born of its light-skinned founder’s (Desiree’s ancestor) aspiration:

A town for men like him, who would never be accepted as white but refused to be treated like Negroes. A third place.

Soon others came. Soon idea and place became inseparable, and Mallard carried throughout the rest of St. Landry Parish. Colored people whispered about it, wondered about it. White people couldn’t believe it even existed.

Desiree is an identical twin. As children she and her twin, Stella, appeared, on the surface, two halves of a whole, but they have taken different paths. When they were sixteen, the twins ran away from home in the dark of night. Their mother, Adele, had been widowed when Desiree and Stella’s father was lynched; Desiree and Stella witnessed the attack as children. So when the twins disappeared, Adele was left alone. Nevertheless, she forgives Desiree her fourteen-year absence and takes her and Jude in.

Stella’s choices were much different from Desiree’s. Whereas Desiree married a dark-skinned man and had a child with him, Stella chose to pass for white. She disappeared completely from Desiree’s and her mother’s lives and neither of them knows where she ended up. For Desiree, every inch of their mother’s home is haunted by Stella. Stella is her missing, vanished half, a hole in Desiree’s heart.

In the fourteen years she was away from her hometown, Desiree married Sam Winston, a man who brutally abused her. She was forced back to Mallard when she realized that Sam would kill her if she stayed. As her sojourn there lengthens and Mallard becomes Desiree’s home again, Jude, her eight-year-old daughter, is bullied and picked on by the other kids at school because of the color of her skin. But Desiree has no other place to go.

Desiree’s path intersects with that of Early Jones, a twentieth-century bounty hunter, after Sam hires Early to find her. Early recognizes Desiree in the photo her husband has provided; as a teen, he had a crush on her. Back then, their flirtation came to nothing; Adele put a stop to it due to the color of Early’s skin. But Early has never forgotten Desiree and now, on impulse, he reveals to her that he was hired to find her and he throws her husband off her scent.

Desiree and Early enter into an on-again, off-again and possibly open relationship. Early is on the road hunting criminals much of the time and Desiree doesn’t ask him if he has other lovers when he’s away, nor does he ask that question of her. But he visits Desiree whenever he has time off and soon Desiree asks Early to seek out Stella for her.

The action then moves forward ten years, and for this part of the book (from 24% in to 42% in), the focal point is Jude, who arrives in Los Angeles to attend UCLA. Her track and field skills won her a scholarship to the school. She’s determined to go back to Mallard as little as possible. After years of being bullied she views a life in Los Angeles as a chance to start over and put her childhood misery behind her.

At a party, Jude meets Reese Carter, a gorgeous trans man who falls for her. Jude reciprocates his feelings. Bigotry has caused both of them to be rejected in their young lives and they give each other the acceptance they both need. Secretly, though, Jude is certain that Reese will abandon her. He is unbearably handsome and she views herself as unattractive. Someday he will realize that she isn’t in his league.

Will Desiree’s abusive husband find her? Will Early find Stella? Will Reese stay with Jude? Will Jude ever realize her own worth? And what has happened to Stella? How has her life played out?

The Vanishing Half has an unusual structure. It’s written in omniscient voice in sections divided by years and ranges back and forth in time. Each section centers on a different grouping of characters. Eventually we find out more about Stella and the ramifications of her decision to pass.

The book is rich in themes. Racism and colorism obviously play an important role, as do mother/daughter and sister relationships. Escape and its flip side, abandonment, are also ongoing themes.

Most central is Stella’s cruel (even if unintentionally so) abandonment of her twin and her mother so as to escape dangers and difficult circumstances, but there are other escapes/abandonments too. Desiree and Stella escape in the night, abandoning their mother. Desiree takes Jude and flees from Sam under the cover of darkness. Early’s parents abandoned him as a child—one morning he woke up and they were no longer there. One of the characters leaves for Europe later in the book, trying to get as far as possible from lies and secrets. And although Jude doesn’t do it in hiding, she escapes Mallard as has Reese his own small-minded birthplace, a town in Arkansas.

The secretive nature of some of these partings means that there is no conscious end to some of these relationships, no closure. Holding on versus letting go of the past is therefore another theme. “The key to staying lost was never to love anything,” Early thinks. These words are at the heart of the book’s escape/abandonment theme—the tension between loving and leaving.

Ostracism and the fear of it—whether it’s Jude’s experience of being abused and bullied by her lighter-skinned schoolmates as a child, Reese’s fear of rejection due to transphobia, or Stella’s fear of discovery and how her outing could make her a pariah in her white community—also permeate the novel. So do the themes of reinvention and transformation; all three of these characters reinvent themselves and are transformed by those choices.

Secret-keeping is another big theme, not just with regard to the huge secret Stella hides. Others also lead a double life, to an extent—Jude and Reese’s drag queen friend, Barry, and others in his social circle keep their cross-dressing separate from their other lives. Reese hides the fact that he’s transgender from others. Guarding Reese’s secret requires Jude to keep it from her mother. Early debates at first whether to tell Desiree that her husband hunts her. Two characters keep big secrets that I won’t go into since they happen later in the book.

The Vanishing Half is the kind of book that is perfect for book clubs; there’s a lot to unpack here. The difficult nature of the story and the fine writing place the book in the space between the enjoyable and the uncomfortable. But it’s absorbing throughout and executed beautifully. Though it’s easy to see, in broad strokes, where the book will go, the details shaded in surprise the reader and give the book dimension, making the narrative progression feel inevitable rather than predictable.

One of the things that impressed me was Bennett’s restraint. A novel with this plot could have so easily tipped into the over-angsty, the soapy, and the melodramatic. But the writing here is steady and sure-handed, guiding the reader through each section, era, and POV without once slipping into the pitfall of too much drama. There is a meticulousness to the book, too—it reads as if the author left nothing of significance off the page, and every word included was needed.

The one exception was this: many scenes ended with a statement weighty with dramatic irony. This enhanced the reading experience for most of the novel but as I neared the end, I started noticing that technique and that made it distracting to a degree. But the language was without many embellishments. It served the story and was direct and clear.

Another impressive thing was how fully the characters were realized. The 345 pages are, as I mentioned earlier, split into six sections and each covers only a few of the characters in groupings (Desiree/Adele/Early, Jude/Reese, Stella/others in her life). That means that there weren’t that many pages devoted to each character. Even so, they all felt fully embodied and lifelike. We both view their actions from the outside and inhabit their thoughts. Each aspect fleshes the characters out marvelously.

If there is a central character in The Vanishing Half, it is Stella. Each section of the book comes at her and her choice to pass from a different direction and when combined, the sections form a mesmerizing story. But my favorite character was Jude. Jude is a quietly heroic figure. She suffers from the cruelty of the lighter-skinned children as she grows up in Mallard and this damages her self-esteem, but she slowly forges another life and comes into her own.

Desiree gradually rebuilds her life too.

His job takes him away from Desiree, but Early always comes back to her and in this way, he serves as a foil to Stella, who has left permanently, who has abandoned her mother and her twin.

I didn’t want to see Stella as a villain because the things that had driven her to pass for white were easy to understand. Her father was hunted, beaten, and lynched, and she witnessed some of that as a child. Later we learn about another racist act she endured as a teen. Her internalized racism was also rooted in her upbringing—the town of Mallard’s very existence was predicated on the notion that it was better to be light-skinned than dark, safer, so much so that sacrifices such as never dating someone dark should be made in service of this goal. A lighter spouse was the ideal. Stella was steeped in that sentiment from birth and that philosophy infected her.

But while Stella’s internalized racism and initial motives were easy to understand, her choices brought so much pain on almost everyone she loved—not just those whom she abandoned, for whom her absence was a gaping wound, but also those she chose. And not least of all, herself. Barricaded behind the walls that keeping her secret caused her to build, Stella was the loneliest person in the book. I did come to see her, if not as a villain, then as an antagonist. She and her choices hurt and even damaged people who were close to her.

The book has an even more prominent antagonistic force, though: society, with its systems of white supremacy and bigotry. All the characters struggle against these systems—they are the omnipresent mountains in whose shadows they must live. Happiness comes in moments of connection. Some nurture their relationships; others are careless with them and suffer for it. This, I think, is the book’s most important theme—that bigotry divides and that connection requires courage. A-/A.