REVIEW: The Underground River: A Novel by Martha Conway

NOTE: This has been published in the UK as “The Floating Theatre”

Set aboard a nineteenth century riverboat theater, this is the moving, page-turning story of a charmingly frank and naive seamstress who is blackmailed into saving runaways on the Underground Railroad, jeopardizing her freedom, her livelihood, and a new love.

It’s 1838, and May Bedloe works as a seamstress for her cousin, the famous actress Comfort Vertue—until their steamboat sinks on the Ohio River. Though they both survive, both must find new employment. Comfort is hired to give lectures by noted abolitionist, Flora Howard, and May finds work on a small flatboat, Hugo and Helena’s Floating Theatre, as it cruises the border between the northern states and the southern slave-holding states.

May becomes indispensable to Hugo and his troupe, and all goes well until she sees her cousin again. Comfort and Mrs. Howard are also traveling down the Ohio River, speaking out against slavery at the many riverside towns. May owes Mrs. Howard a debt she cannot repay, and Mrs. Howard uses the opportunity to enlist May in her network of shadowy characters who ferry babies given up by their slave mothers across the river to freedom. Lying has never come easy to May, but now she is compelled to break the law, deceive all her new-found friends, and deflect the rising suspicions of Dr. Early who captures runaways and sells them back to their southern masters.

As May’s secrets become more tangled and harder to keep, the Floating Theatre readies for its biggest performance yet. May’s predicament could mean doom for all her friends on board, including her beloved Hugo, unless she can figure out a way to trap those who know her best.

A great cover will grab my attention and in this case it was the UK version that caught my eye and insisted that I find out what it was all about. Confusion reigned when I realized that there were two different covers and titles to go with them but I figured it out. I still had to put both covers in the review though – just because.

The unequal relationship between seamstress May Bledsoe and her vibrant actress cousin Comfort Vertue is one of long standing. Comfort takes advantage and May has fallen into the habit of allowing it. As single women in the second quarter of the 19th century, they’ve thrown their efforts together for years after widowed Comfort and orphaned May realized they needed to support themselves. Now Comfort is aging out of the ingénue roles and they’re headed to a new theater in St. Louis aboard a steamship down the Ohio river. Fate sends them on new directions in life when the boilers explode and both women escape the death by drowning that claimed so many of their fellow passengers. The aftermath of explosion, when relatives and friends were desperately searching for their loved ones, reminds me a little of post 9/11. Comfort falls into the company of a boisterous – May would say bullying – abolitionist in Cincinnati and true to her usual “me first” view of life, she swans off leaving May to find her own way from then on. May and another actor snag positions aboard a traveling flatboat theater – The Floating Theater – but it’s May’s desire to prove to her cousin that she can fend for herself that leads to the next Act.

The Floating Theater travels down the Ohio, meandering from side to side of the river, stopping at the towns large enough to offer a crowd to watch the short plays, songs and skits the actors perform. When May realizes that her cousin, now traveling with the abolitionist and making speeches for that cause, could be in danger, she goes to warn Comfort only to find herself trapped into taking a more dangerous role in helping runaway slaves. May’s time in the small towns on each side of the river – free on the North and slave on the South – have forced her to face the horror of slavery in a way she’s never had to before. There are men who earn a living tracking and recapturing runaways and from some notices May has seen, those who help the slaves could be in grave danger as well. Opinions and tempers can run high and not even whites in free states are all sympathetic to the abolitionist cause or above capturing slaves for profit.

Relatives “lend” slaves across the river, May sees the blocks on which slaves stand during sales and the holding cells with manacles in which they wait, chained for those sales. People who help slaves are viewed by some as the thieves to be jailed and even hung for the crime. May meets merchants on the Ohio side of the river who don’t want to anger their Southern customers and thus turn a blind eye to what’s underneath their noses. 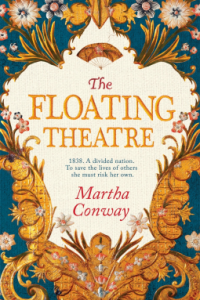 In her new job and world, May finds what she didn’t even know she was missing: people who actually care about her. May has always known that Comfort cares for herself above anyone else and at times May has taken some minor revenge over Comfort’s slights and tendency to hog all attention but as Comfort casts May off without a thought while these actors and theater folk take her on so easily and – mostly – cheerfully, the reality of her past meagre life with Comfort come into sharp focus. On the Floating Theater, May is valued for herself and what she can bring to the actors’ performances and begins to find talents and abilities she’d not known she had. Oh but she can’t resist boasting, just a little of this and is then snared by a debt just when she was settling into her new life. Now she faces the dangers not only to herself but also exposes her new companions as well.

The small and rustic farming towns of a still being settled Ohio River come alive with their log cabins, fields, orchards, muddy trails from the river and rough and tumble people. May would rather sit and sew but her new duties force her out more into the world while the Captain in particular, help her along. May being so literal and almost unable to lie, isn’t sure if Hugo’s cheerful praise of her is just to sell tickets to the shows or what he really feels. In Libby and Leo, she finds true friends while the endlessly changing river fascinates her as the men use the sweeps to steer the flatboat around sandbars, log snags and into deeper currents. Slowly May finally begins to see the magic of the theater where the viewer can sink into distant places and times. It’s not a lie, the actors tell her, it’s their skill in taking an audience where it wants to go. She feels included, one of them. May and Hugo talk and she realizes that he’s taking the time to really know her – her past and her eccentricities. He gives May a birthday present such as she’s never received before.

And May must weigh all of this against what she’s been wrangled into doing – first because she has to and then because she can’t not help. No fancy words or mental gymnastics or business interests or status quo counts anymore. To do nothing is to condone while to mouth that one person can’t change anything isn’t good enough. Maybe one does have to bully as does Mrs.Howard the abolitionist or be willing to sneak out in the dark of night as does her Negro servant. May knows real fear as she struggles and improvises but she keeps going.

The story winds itself up to a finale with an all or nothing rescue. The stakes are as high as they’ve ever been and the tension mounts as one thing after another occurs to throw obstacles in May’s way while the clock ticks and the hunters are sniffing and baying after their human prey. It dawned on me that May was going to have to go big for there was no going home. It was all on the line with one throw to sink or swim and my attention was riveted.

May and Hugo learn something about love, trust, and courage. About discovering that line within one’s self that can’t be crossed. Of working through and past your fear for yourself and of thinking about others. There is a price to be paid for everything and such happens here. But there is also much gained and a bright future ahead. A-