Recommended Read
Alison Atlee is the creator of the DA Wednesday author interviews that were initially about first books and have branched out into topics.

Janine actually turned me on to this, your debut novel. I now owe her a big present, because I hate to think that this story would otherwise have escaped my attention. The book is marketed as historical fiction rather than romance, but I will go out on a limb and say that even though it’s only January, The Typewriter Girl is easily one of the most romantic books I’ll read all year. 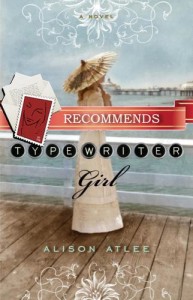 The story begins with Betsey Dobson, a young woman working in a typing pool in Victorian London. She’s got plans to move on (and hopefully up), though, and to do so she needs a character letter from her employer. Knowing one will not be forthcoming (she’s rebuffed her boss’ advances), Betsey forges one and is caught. The incident ends with her slamming a door on her lecherous supervisor’s fingers and more or less fleeing before she can face arrest for assault.

Betsey is a tough cookie, smart and capable and looking to better herself. She finds herself stymied, as no doubt many working women in Victorian England were, by the lack of opportunities and the lack of protection a young single woman was faced with. She’s risen from a maid’s position (one she was fired from after her employer’s son seduced her) and she is capable of rising still further, if only someone will give her a chance. She thought she’d found that when she’d met John (nee Iefan, in his native Welsh) Jones while taking notes at a meeting he’d attended.

John perceived Betsey’s intelligence and drive (and found something familiar in them, for he too came from poor circumstances) at that first meeting, and impulsively offered her a job at the hotel he works for in the resort town of Idensea. Betsey is to manage outings for hotel guests, an opportunity beyond any she could find in London. But now she’s without the character she was told she must have and short the train fare she needs to get to Idensea. She gets on the train anyway, having nowhere else to go. Thus she arrives in disgrace, all of her worldly possessions (a small valise and a caged bird) with her and in real danger of being jailed as a fare jumper. Luckily, Mr. Jones is at the train station (awaiting the arrival of a young woman he’s courting and her family) and takes pity on Betsey, paying her fare and smoothing things over with the stationmaster.

Betsey is sure that after this latest humiliation, her dream of getting the hotel job is definitely dead. But Mr. Jones decides that he still wants to take a chance on her. In doing so, he opens up a whole new world for Betsey.

Idensea is a far cry from gritty London. The hotel is sumptuous, but Jones has plans to make the quaint seaside town a real destination with the pier and pleasure railroad he’s constructing. He has encountered resistance from Sir Alton Dunning, who is on the resort’s Board of Directors and who fears an influx of the common folk should Idensea become a destination for “day trippers.” Jones believes in his vision; he’s also simply anxious to finish up his work on the railway and be gone, onto the next project. Like Betsey, John is eager to get ahead in the world.

One of the pleasures of The Typewriter Girl is seeing Betsey come into her own as tour manager. She represents untold smart young women of her era, who only needed to be given the opportunity to actually do a job that utilized their brains and assets. Betsey quickly comes up with ways to make the tour operation more profitable, though these put her into further opposition to Sir Alton. John backs her us, as does Tobias Seiler, the kind and wise hotel manager who acts as something of a mentor to Betsey.

Each chapter opens with a brief passage from How to Become Expert in Typewriting, which apparently was an actual book published in 1890. The quotes are usually at least subtly relevant to the goings-on in the story at the moment, or sometimes simply ironically amusing:

None but clean fingers should ever touch even the margin of the paper. (Alas! that it is necessary to say this.)

Sit in an erect and comfortable position close to the machine.

Never fail to use Mr., Esq. or some other title when addressing a gentleman.

The issue of Betsey’s sexual experience and John’s relative lack of same is dealt with in an interesting way. John has learned the hard way to be wary of his carnal appetites. Betsey’s romantic adventures have not always ended well (her latest paramour keeps cropping up and causing trouble), but the lesson she’s learned from that is to take her pleasure on her own terms and no one else’s. She won’t allow herself be “had”; she is an active participant in her own sex life, which seems like it would have been a rarity, at least for a single woman, in Victorian England.

At first the romance feels a little unbalanced; John is far from a cad but he’s so focused on his own idea of success – which includes marrying up (ideally, to a lovely but rather shallow girl named Lillian Gilbey) – that he doesn’t really consider Betsey as a long-term romantic prospect, for all that he’s drawn to her. Betsey falls in love with John more quickly (who wouldn’t? he is eminently lovable), but knowing they have no future makes her wary and, at times, prickly.

Idensea is painted in idyllic terms, particularly as seen through the gaze of those, like Betsey, unused to fresh air and clear vistas. But beneath the beauty, life is still going on, with all its joy and sorrow. A tragedy occurs a bit past the midway point of the book, and it cast the slightest pall over the rest of the story for me. What came after was bittersweet, though the book does have an HEA.

The Typewriter Girl is brimming with interesting and well-nuanced characters: not only are John and Betsey compelling and worth rooting for, but so are the friends Betsey makes, such as Sarah, the owner of the boardinghouse where Betsey finds a home and Sarah’s adolescent son Charlie, who develops a crush on her. Even the “villain” of the piece, Sir Alton Dunning, is painted in shades of gray rather than stark black. An ex-composer, he earned his title through his musical contributions and his fortune through his wealthy wife. But nothing seems to make him very happy, and he seems intent on making those around him similarly unhappy; notably, his son, Noel, who wants to be a musician himself. As John astutely notes, Sir Alton “dreads…risk” and his decisions “come from fear.” Somehow knowing these things made me feel a bit for Sir Alton, even as he tries to manipulate John via Betsey.

Reading this, I was reminded a bit of some of the books of Eva Ibbotson; not in all aspects (most of Ibbotson’s heroines were a good deal more naive than Betsey), but in the lyrical prose, the slightly magical feel of the setting and the warm depictions of the characters. I can hardly think of a higher compliment in my book. My grade for The Typewriter Girl is (a high) A-.