REVIEW: The Secret of the Midnight Tunnel by Angie Frazier

After I admittedly adored your YA debut novel of last year, Everlasting, I have been looking forward to this book.   Middle grade books have started to appeal to this reviewer, and it pleased me to see an author of historical novels taking them into the middle school aged audience.   YA is said to have a lack of historical novels – and it does – but the Middle Grade level has perhaps even fewer ones.   Not only that, but it’s also a whodunit mystery that is reminiscent of Nancy Drew and Trixie Belden.   When I was younger I enjoyed those kinds of mysteries, and that enjoyment also held true for your debut MG novel. 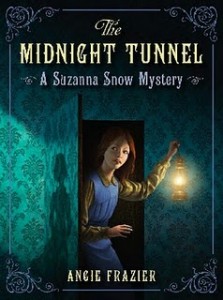 Suzanna Snow helps out at her father’s hotel.   The year is 1904, and the place is New Brunswick.   New electric lighting and indoor plumbing make it modernized and very popular, but Suzanna doesn’t really care for the hotel managing business.   Her hours spent folding sheets and attempting to fetch tea without spilling it are met with daydreams of becoming a famous detective.   Just like her uncle in Boston.

To her chagrin, Suzanna’s family finds her detective skills little more than a fancy.   Her uncle has written back three times at most to her many detailed letters, and his fame isn’t well discussed among her parents.   Suzanna is bound and determined to be a detective, and instills these fancies onto her two good friends.   Isaac, a boy who works at catching lobsters at the docks, and Lucy, a clumsy maid working at the hotel.     Both more sensible than Suzanna in some cases, they manage to keep her in check.

Suzanna’s junior detective skills are soon needed when a girl from the hotel goes missing.   Her parents are evening thinking of calling in her uncle!   The disappearance of the little girl, Maddie, has left everyone on their toes.   Did she wander off into the woods?   Or – as Suzanna suspects – was something else to blame?

Her memory of the night the power went out prior to Maddie’s disappearance is dim.   One thing did stand out to Suzanna, though.   When she traveled through the secret servant’s tunnel to find where Lucy was, she saw what looked to be an adult figure dragging a little girl into the shadows.   Could it have been Maddie, or just Zanna’s imagination?

Where I think Suzanna’s story shines is the character.   I get sucked into books with strong female leads, and Suzanna is no different.   Her actions are sensible and she knows that her place as a child or a girl doesn’t mean she’s any less skilled or intelligent than anyone else.   She observes things by writing them down in a notebook like a ‘real’ detective would.   Her worship for the profession all goes towards her famous uncle as well.   In increments, this doesn’t sound new.   It really isn’t.

The thing that made Zanna interesting to me was how she did all of this but was very grounded.   It all came with believable causes.   She deals constantly with parents or people that don’t believe in her, so her stubborn nature sets out to prove them wrong.   Her uncle isn’t the great man she expects him to be, and her character growth only improves because she matures at the realization her hero is human.   There’s a lot of things that middle grade readers can take away from Zanna – both simple and complicated – that makes her a character I think people will want to read about.

The secondary characters were more classic in their actions.   Some of them I did come to really appreciate, such as Uncle Bruce with his harshness, and Maddie with her level of rich girl attitude and ignorance.   These are people that you end up remembering, as they are spoken with an admirable level of fondness by the heroine.

Lucy was perhaps the best drawn character.   A clumsy maid working to pay for her sick mother.   The making of a sob story to be sure, but Lucy is quirky and fun.   Her friendship with Zanna was really intriguing because of a spoilerish event that happens towards the end of the book.   It brings a level of finality and maturity to the book that wouldn’t happen with more happy-go-lucky middle grade books.   That told me you, as an author, were not going to dumb down the writing for your audience.

This was apparent in a lot of the book’s aspects, actually.   You included a lot of characterization that some people would skimp on in favor of putting in red herrings and other plot things.   I like plot, but as a person who doesn’t have much experience with mysteries, I prefer characterization and a more simple process of figuring it out that still leaves a level of mystery.   I didn’t suspect the person who committed the act until later in the book, which I thought was pretty good.

However, a middle schooler may have a better mind for mysteries.   I admit I can be very dense.

Vocabulary was also something I really enjoyed.   Normally I don’t give a flying fig about what an author uses vocabulary wise in a YA novel, but in MG I notice when some SAT-ish words appear in good form.   It works with the time period and it isn’t dumbing the understanding down.   That made me extremely happy as a reader.

I am not an expert on Middle Grade fiction, but Suzanna Snow definitely ranks as one of my favorite novels of the type.   My one complaint about it was that I really wanted more.   Having to wait for the next book is going to be upsetting.   Historical accuracy (from what I could tell), fun sleuthing, an intelligent protagonist, and some great moments of reality made this a book I am armed to recommend to teachers and those with mystery loving children.   Now go back to writing more so these small children have another Nancy Drew in their lifetime.   And so I can get more books.     I give this a solid A-.