REVIEW: The Score by Elle Kennedy 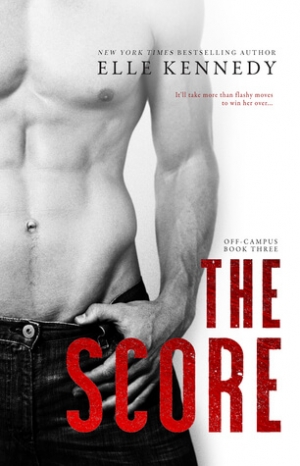 I begged Jane shamelessly for an early copy of The Score (she has connections). Your Off-Campus series is one of the best going around at the moment and I basically inhale them at the earliest opportunity. I started the book that night, was forced to actually sleep, and then do adulting the next day but I finished it in less than 24 hours all told. And then I had a sad because it was over. (I decided to combat this depression by re-reading The Deal. Good move Kaetrin!).

The actual reading part however was pretty much full of happy book sighs, big grins, actual laughter and even a few tears (but I won’t tell why). When I thought about it*, I could come up with a couple of little niggles and I think it ended a bit abruptly, but basically I just loved it.  Really – everyone just go read it now. Do not pass go. Do not collect $200. Why are you still here?? Go!

(*I had to think pretty hard but I think there’s something in the reviewer handbook that says if you can’t find something to gripe about you’re doing it wrong.)

I love the dual (first person, present tense) POV which gives me lots of time in the heads of both main characters – Dean Heyward-Di Laurentis and Allie Hayes – as well as the writing style which gives me loads of snappy dialogue and banter, not just between the main characters, but within the wider group of friends as well.  (Honestly, the discussion between Dean and Beau about Twilight was hilarious. In fact, here’s a snippet of it. You’re welcome.)

His wary eyes study my face. “What about it?”

“Okay, so you know how Bella’s blood is extra special? Like how it gives Edward a raging boner every time he’s around her?”

“Are you fucking with me right now?”

I ignore that. “Do you think it happens in real life? Pheromones and all that crap. Is it a bullshit theory some horndog dreamed up so he could justify why he’s attracted to his mother or some shit? Or is there actually a biological reason why we’re drawn to certain people? Like goddamn Twilight. Edward wants her on a biological level, right?”

God, I am. This is what Allie has reduced me to. A sad, pathetic loser who goes to a bar and forces his friend to participate in a Twilight book club.

Dean has been a favourite from the beginning. He’s an exhibitionist ladies man who has an aversion to wearing shirts (he has an excellent chest so this is no hardship for onlookers). He has lots and lots of sex. He rarely goes back for seconds – the world of Briar College is his sexual buffet. He’s adventurous, completely charming and doesn’t bat an eyelash at fucking in semi-public spaces (he particularly enjoys sex in the living room of the house he shares with his hockey team-mates and it doesn’t matter who else is around really). He’s sexually open and unashamed and I just love him. He’s not mean or cruel. He doesn’t make promises he doesn’t keep and he makes sure anyone he’s hooking up with is on the same (no-relationship) page as he is. He also doesn’t slut shame the girls he’s with. He holds them to exactly the same standard he holds himself. Sex is fun and as long as everyone involved is consenting and being safe, who’s being harmed? (Answer: No-one.) It’s not one rule for him and one rule for the girls. He doesn’t think of them as sluts or whores. In fact, he explicitly says as much during a conversation with Allie when he tells her to remove the word “slut” from her vocabulary.

Allie is a “nester”. She doesn’t do casual sex. She likes relationships and cuddling and hanging out and calling each other late at night. So she’s the last person anyone would think would end up with Dean.  However, a(nother) breakup with her long term boyfriend Sean (this time for good), a bottle of tequila and Dean Heyward-Di Laurentis are proof that anything is possible.

Yeah…I need to nip this Dean idea in the bud. I don’t know why he’s so eager to jump into bed with me again, but I’m confident he’ll get over it eventually. The guy has the attention span of a fruit fly, and the affection-giving habits of a puppy, offering his sexual devotion to whoever happens to be holding the treat. By which I mean the vagina.

Allie is a drama major and Hannah’s (from The Deal) room-mate and BFF. Both Hannah and Garrett are protective of her and have given Dean strict instructions to keep his dick away from Allie. Too bad Dean is not great at taking instruction from his friends, especially where his dick is concerned. He’d never force anyone but he’s not averse to a little persuasion. And Dean can be very persuasive.

Here is where one of those little niggles came in (when I thought about it afterwards) – I didn’t completely understand why Dean became fixated on Allie after their drunken (but not too drunk) hook up. (Perhaps there is something to the Twilight theory.) Sure the sex was awesome but sex for him often is. Allie is hot but so are all the women Dean has sex with. What made Allie different? I mean, don’t get me wrong, I didn’t really care. I wanted Allie and Dean to be together so I was happy enough to go along with the story, but in hindsight, I don’t think the case for “what’s different about this girl?” was fully made out. The blurb suggests Dean’s interest in long term comes after something tragic happens. And something tragic does happen but it happens fairly late in the book (and no, I’m not telling) and Dean is all in with Allie well before then.

For all Dean’s wild ways, he is smart, funny, caring and kind. He is also filthy rich and has lived very much the charmed life but he was raised to earn his money and to try and not merely to skate by (heh, see what I did there?) on his name so he doesn’t like to use his name to get things. He works hard at school and gets excellent grades. Most things, as it happens, come easily to him and when things get really hard, he faces a new challenge – and he doesn’t do it so well at first. And that brings me to my other little niggle. I’d have liked to have seen Dean prove himself to Allie to round out the HEA. I understood what happened, I believed his apology (and I’m so glad you didn’t take the narrative to the place I really didn’t want it to go) but I did have a moment’s disquiet about what might happen the next time life knocks Dean on his ass. Will he be okay then? I’d like to think he will but I can’t say 100% for sure from the narrative. Also, perhaps he could have groveled a little more.

Most of the book is Dean and Allie hooking up – at first on the down-low but later openly and their courtship is wonderful. They bond over terrible French TV and conversation – there was a lovely point late in the book where Allie is thinking about all the things she likes about Dean and his (amazing) sexual prowess is something like fourth on the list. I believed they not only had the hots for each other and were sexually compatible, but that they genuinely liked each other and were in all the other important ways compatible too.

Allie is awesome too. She’s a talented actress and her arc involves making decisions about her future – the LA/Hollywood route with lucrative offers for sitcoms and romcoms or the New York theater route where the roles are meatier but may not bring the fame and fortune she might easily obtain on the West Coast. She is as sexually adventurous (in many ways) as Dean and she mostly laughs at Dean’s (over-)confidence and machismo. She doesn’t bill and coo over Dean but treats him like a regular person.  I also identified with Allie because of this:

I’m tired of wondering how Sean is doing and fighting the urge to call him. I might not want to get back together, but I hate knowing that I hurt someone I care about. I have this terrible habit of wanting to make everyone happy, even if it means sacrificing my own happiness. My dad insists it’s an admirable quality, but sometimes I wish I were more selfish.

Growing up as the family peacemaker, I can totally relate Allie.

Dean’s perfect life is threatened somewhat when a new Defensive Coach is appointed. Dean has history with Coach O’Shea and it’s not good. What I thought was really interesting though was that O’Shea wasn’t portrayed as completely out of line or unbalanced. His POV was understandable in the circumstances even though Dean felt he was sometimes singled out  by O’Shea unfairly. And, in the end, it is probably O’Shea who is at least indirectly responsible for something life-changing (and excellent) for Dean.

Most of all, the Off-Campus crew are people I’d like to hang around with (whether they’d want to hang around with me is another question, but let’s just pretend I’m hip and young and super cool, okay?). I love hanging out with all of them in the books. I told a friend my overwhelming thoughts at the end of The Score were *big grins* and *happy sigh*. It made my heart happy and it made me laugh.

I poke myself in the eye. “Would you stop touching yourself?” I drop the mascara tube on the table and pick up a tissue to wipe the smear of black I just made at the inside corner of my eyelid because I can’t keep my fricking eyes off Dean.

“What’s wrong, baby? You jealous? I was thinking of how hot you look.” He rolls to his side. “You make a little circle with your mouth when you put your eye makeup on. It’s basically begging me to stick my dick in there.”

Nope, there’s nothing warm and squishy about my relationship with this guy. I shoot him a disbelieving glance. “We just got done having morning sex,” I remind him. I apply two quick swipes of the mascara before Dean’s hand can do more damage under the bed sheets.

I throw my coat on and lean a knee on the mattress to kiss him goodbye. “You’ll have to jerk off then because I have class and I don’t want to be late.”

He curls up and kisses my neck first, then my lips. “I’m going to rub one off now so that I can last longer tonight.”

Grade: A- and a definite recommend from me.