REVIEW: The Perilous Life of Jade Yeo by Zen Cho

Back in 2012 you sent DA a blurb about your self-published novella. I remember being intrigued by the excerpt and I meant to request it, but apparently I never did. Stupid me. But it stuck in my mind, and a few months later I bought my own copy and finally read this sparkling, original story. But when I sat down to review it, I found that you had made it exclusive to Amazon and I couldn’t review it for Dear Author. Then, a few months ago, I checked again and not only was Amazon exclusivity gone, it was also available as a free read at your website if readers didn’t want to pay for it. I strongly suggest that readers try a sample, and if they like it, buy it, because we want publishers and other authors to know how eager we are to read books of this quality and type. 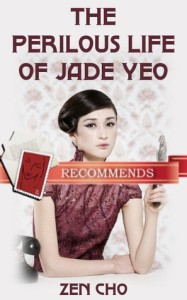 Geok-Huay Yeo, AKA Jade, is a Chinese Malaysian woman living in early 1920s London. Not only has she persuaded her loving but protective parents to let her come to England for college, she is staying on and avoiding their attempts to marry her off. She supports herself, barely, by writing fashion articles for a women’s weekly and reviewing books for the Oriental Literary Review, which is edited by Ravi, a south Indian Brahmin.

Jade reviews and eviscerates the new novel by Sebastian Hardie, a well-connected Bloomsbury-set writer. Hardie is intrigued and invites Jade to a party, where he proceeds to charm her. The fact that he’s married is a minor hiccup, not least because his wife doesn’t insist on marital fidelity (she has outside interests of her own). Jade fends off Hardie for a while, but when she runs into him in Paris she gives in to his advances, as much out of curiosity as affection, with the inevitable results. But while the outcome is conventional, the story takes an unexpected turn after that.

The novella is written in the form of a diary, and consequently we see developments entirely from Jade’s POV. Her voice is dry, self-aware, and witty. There are regular reminders that we are not reading through the eyes of a standard romance heroine:

You can’t ever tell people you think you are pretty. Even if you are pretty you have to flutter and be modest. Fortunately here nobody thinks I am pretty, so my thinking I am pretty is almost an act of defiance; it makes me feel quite noble. I have that slim bending willowy figure that looks so good in a robe, and smooth shining black hair like a lacquered helmet, and a narrow face with a pointy chin and black slashes of eyebrows.

It took me a long time to realise I was pretty, because Ma and Pa never thought so. Even the fair skin they didn’t like–I’m not the right kind of fair. The Shanghainese girls on cigarette cards are like downy white peaches. I am like a dead person. This was disturbing on a child. Now I am an adult, I am like an interesting modern painting, but my parents are keen on moon-faces and perms.

They are the nicest parents, though. They always told me I was clever.

Sebastian is presented as the quintessential romance hero, down to his appearance, so it’s no wonder Jade is attracted to him:

I’d seen his picture in Vogue and so had known he was good-looking, in the style of a Romantic poet living in the Lake District. He had a long face with dark hair curling over a white forehead, and wrinkles around his eyes that made him look melancholy when solemn and sweet when he smiled. But he wasn’t at all grand.

The most surprising thing about him in person was that he struck one as being sincere. He had a very grave, intense look that, when directed at one, made one feel one ought to say something interesting to deserve it.

As the story unfolds, it’s not Hardie’s married state that renders him ineligible for hero status so much as his personality, which hews to what most romance heroes would probably be like in real life. Jade is quite willing to let him go and move on, but circumstances make that difficult.

Jade is not completely alone (she has her social-climbing aunt), but she is somewhat isolated. When she describes herself as having three friends, you believe her, and it’s not because she’s not someone you’d want to be friends with, but because someone like her doesn’t fit easily into the prevailing social environment.

I don’t want to give away the second half of the story, because it’s so much fun to watch it unfold. So I’ll just count the ways in which this is not a genre-conforming historical romance novel:

The ending is a little bit abrupt, and we don’t really get to know the hero, although I definitely believed that the hero and heroine were in love with each other, and I cautiously believed in their HEA (it won’t be easy). And the story is short, especially given all the events that transpire. I would have loved to read a longer version that developed some of the storyline more fully.

I’ve read a number of stories set in World War I and the 1920s now. This one really captures the flavor of the era, not so much through historical touchstones as through the language, relationships, and prose style. It recalls Heyer in some ways, Woodhouse in others. It’s frothy but not at all insubstantial. Rather, it’s effervescent and sparkling like Champagne; it goes down easy, feels like something special, and tastes complex and subtle. I’ve read the story three times now, and each time it both moves me and makes me smile. The author has written a number of SFF short stories and novellas, as well as at least one other historical short story, and I’m furiously tracking down her backlist. Grade: A-