REVIEW: The Only Gold by Tamara Allen

This review is long overdue. I loved this book when I read it last year, so much that I put it on my Best of 2011 list. But I didn’t get the review written in proper time, and then the Dreamspinner Press debacle happened and Sarah and I stopped reviewing DSP’s books. Your review became collateral damage of that decision. Then you retrieved your rights from DSP, and I swore to myself that I would review it as soon as it was available. You’ve self-published it (at an attractive price, no less), so here we go! 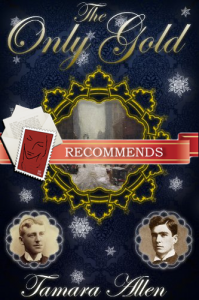 Jonah Woolner is a bank clerk in New York City. He is a very good bank clerk, and when his superior retires he hopes to be promoted to replace him. But instead, the bank owner names an outsider, Reid Hylliard to the position. Jonah is devastated; Reid is charming, handsome, and charismatic, and he soon wins over everyone but Jonah. But Jonah’s antipathy is not just sour grapes. He genuinely fears that Reid’s policies will undermine the bank’s business and undo all the good work Jonah has achieved. Reid sees Jonah’s animosity clearly but refuses to accept it. He works to win Jonah’s friendship and then, slowly, more than that. But just as Jonah succumbs to his attraction to Reid and hesitantly begins to believe in an emotionally satisfying life, their fortunes and that of the bank are jeopardized by a bank heist that places them in mortal danger. And worse, it may or may not involve Reid.

One of the aspects of your novels and short stories that I enjoy so much is your ability to create not just a sense of place, but the fullness of the historical moment in which you are writing. As you did in Whistling in the Dark and If It Ain’t Love, you paint a compelling, rich picture of life in New York City, this time in the late 19th Century. Jonah commutes to the bank by a combination of walking and streetcar, and we make that journey with him. The bank comes to life through your words, as do the people who work there. Jonah’s boarding house is full of the kinds of characters that populated Americana novels of the late 19th and early 20th centuries, and they are utterly believable. For me this novel recalls the writers of the urban landscape of the United States in that era, like Dreiser writing about Chicago in Sister Carrie. More recently, it brings to mind Steven Millhauser’s Martin Dressler, which painted a minutely detailed portrait of an ambitious young New Yorker. These are the kinds of books that causes me to forget that I’m sitting in a suburban house in Northern California in 2012 because I’ve so thoroughly immersed myself in the milieu. Anyone who reads my reviews knows how high a premium I place on context and historical authenticity. For me, you’re the gold standard, and this book is an exemplar.

But the characters are just as compelling as the context. Jonah is not an easily likeable character. He is extremely disciplined in his approach to his work, and he has little personal life that we can see. He cares about the bank almost too much, the way a more emotionally rounded person might care about another human being. And yet, I had to respect him. His devastation at being passed over for promotion wasn’t just a reaction to his thwarted ambition, he really worried about the bank.

Reid is a complex character. We see him through Jonah’s perspective, and we share Jonah’s suspicion, puzzlement, and unwilling attraction. Where did he come from? He’s obviously intelligent, gifted, and ambitious. Why this bank, now? And why is he attracted to Jonah? This is a classic opposites-attract setup, but Jonah isn’t one of those characters where, when he metaphorically takes off his glasses and gets a good wardrobe, turns into a gorgeous stunner. He really is prickly, repressed, and hidebound. So what does Reid see in him? Does he have an ulterior motive?

At first, Jonah resists, but then as he gives in, he warms up, and Reid sheds some of that obvious, self-protective charm and becomes more genuine. He’s still a mystery, but he’s more approachable.

“You said it yourself. I’m not one to take risks. I’ve been as careful in the planning of this venture as any officer in the bank.”

The searching light returned. “I was wrong,” Reid said quietly after a moment. “You’ve taken one damned substantial risk.”

“Being involved with you?”

“Handing over your heart.”

Jonah raised an eyebrow. “Very sure of yourself, as usual.” That provoked a low laugh, and Jonah was glad to feel more of the tension ease from the limbs wrapped around him. “The damnable thing is—you’re invariably right.”

“Good. That’s the one thing I most wanted to be right about.”

Jonah smiled. “Does everything come to you so easily?”

Reid’s narrowed gaze could not mask an elated light. “You’re just trying to prove me wrong.”

Jonah laughed. “That’s part of it. But only a very small part.” His kiss encouraged more, and Reid took his breath away.

As Reid opens up, Jonah is more willing to let down his guard, and the romance that develops between them is warm and very believable, as is the way you deal with the historical issues surrounding homosexual relationships (I should note here that as with your other stories, the sex scenes are not at all explicit).

Even after the physical and emotional relationship deepens, it’s obvious that Reid is still hiding a lot. I found the contrast between Jonah, who is naturally reticent, and Reid, who seems so extroverted but masks so much, intriguing, and assumed it would cause conflict. And it did, but not at all the way I expected. The storyline ratchets up once the possible heist comes into play, and we move from a rather leisurely character study to an action plot. There are hints of it in the earlier parts of the book, so it’s not out of the blue, but I still found it a bit disconcerting. I probably should have anticipated the mystery better (and Reid’s role in it), and I’m sure other readers will figure it out much more quickly; I think I was subconsciously avoiding solving the puzzle because I wanted to stay in Jonah’s head.

The HEA is quite satisfying, and again, it’s believable for the time period. I closed the book wanting to read it all over again. I can still see Jonah walking to the streetcar, or walking with Reid down the streets of 19th-century New York. Once again, you’ve written a compelling, romantic novel that makes me glad I have one more Tamara Allen book left in my TBR.

[Note: The Only Gold is available for 30 percent off the regular price at All Romance ebooks until April 15. ]